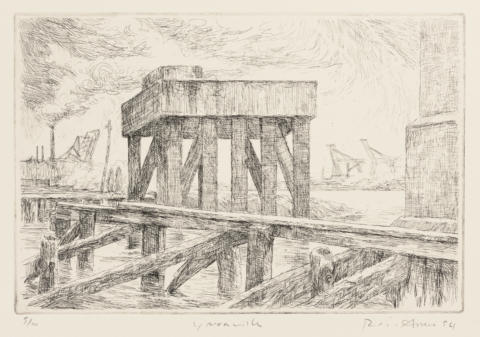 Etching. A view of an industrial port, with the remains of an old pier in the foreground. Dominating the centre of the composition is a tall structure consisting of vertical beams surmounted by a platform, on which sits a rectangular object. In the distance are cranes and, at left, a leaning telegraph pole and a tall, smoking chimney. The subject is lightly etched.

Yarraville is a suburb of Melbourne that lies some eight kilometres to the west of the city centre, near the mouth of the Yarra River and just north of the West Gate Bridge. This view is taken from under the bridge, on the western bank of the river. The large structure at the centre of the composition is a remnant from the building of the bridge, which was completed in 1978, while part of one of the bridge’s pillars is seen at the right edge of the image.

Although based on a watercolour made on the spot, the vista depicted here is not entirely topographically accurate, as it presents a combination of views. This is also true of Structure with vapour trails, 1993, reworked 1995 (cat. no. E.084), an earlier etching to which this one is closely related. E.089 exists in one state only, possibly because it follows such a similar composition, which had been worked through several states.

In printing an edition of E.089, Amor experimented with plate tone and wiping, and with the colour of the paper, to create an edition of differing, rather than uniform, impressions. No two edition impressions are alike, the multiplying function of the printing process being used here to obtain a variety of effects.