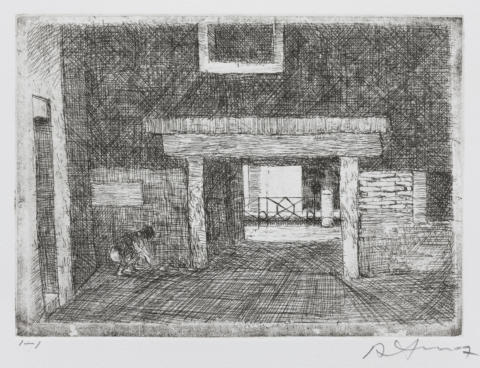 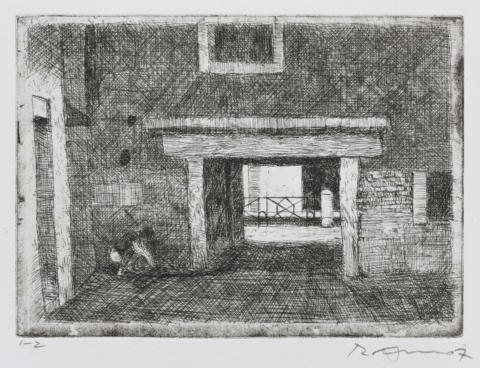 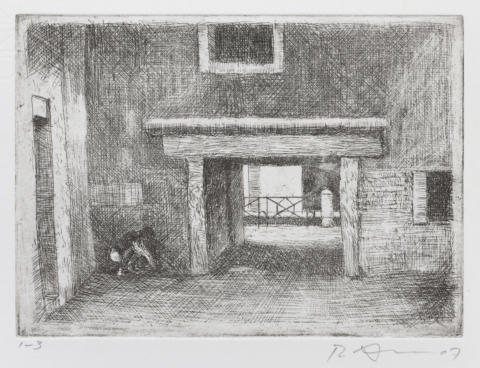 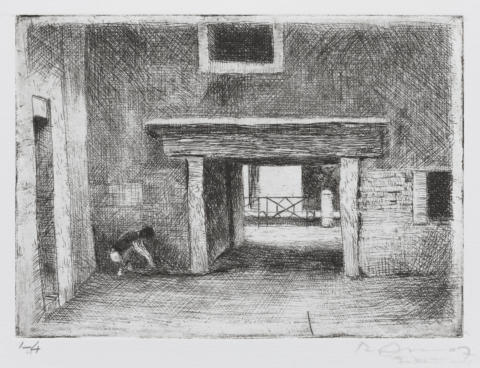 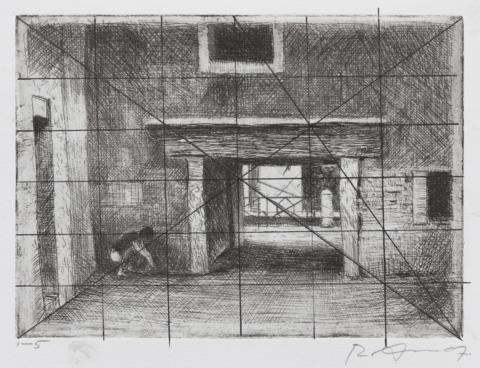 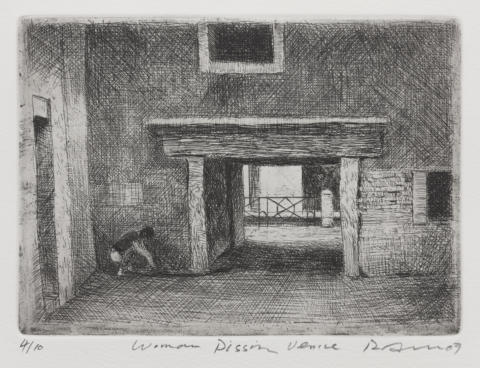 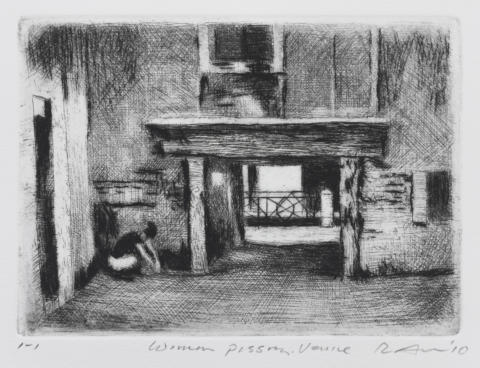 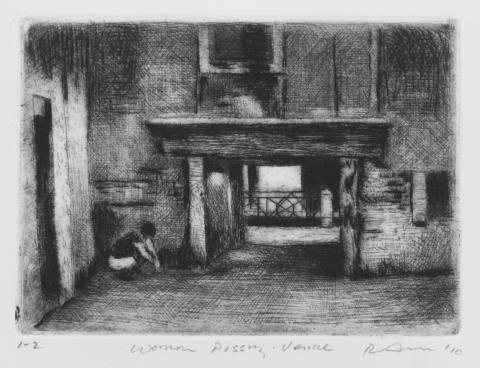 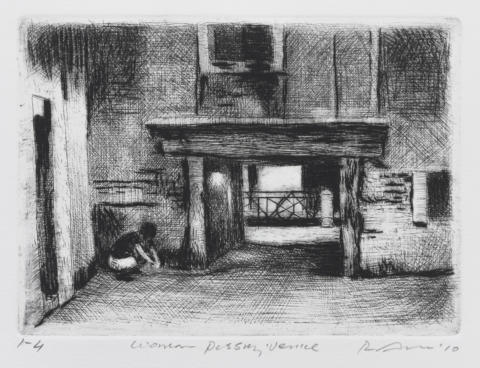 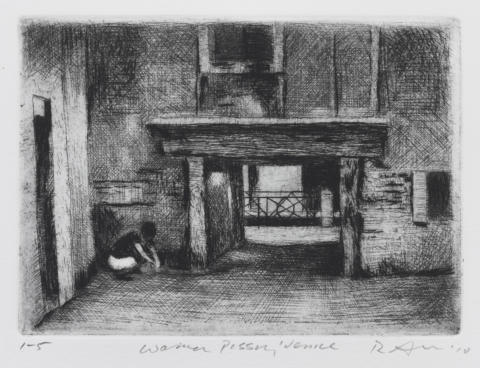 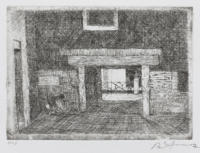 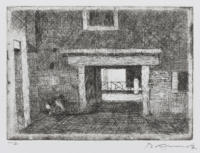 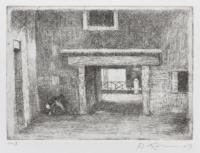 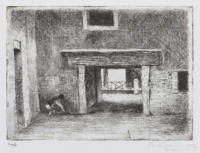 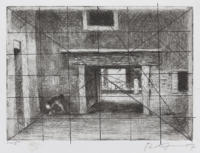 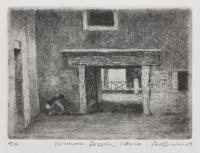 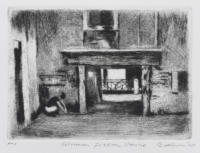 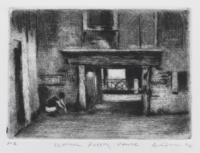 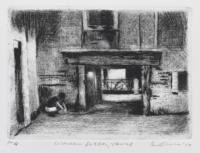 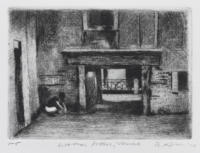 Etching and burnishing. In a Venetian courtyard, to the left of a post-and-lintel passageway, a woman squats to urinate; beyond the passageway is a glimpse of a canal, and on the embankment opposite are a mooring post and a decorative railing. The image is rendered largely with etched cross-hatching; however, burnishing is evident at the far left of the composition and in the bottom member of the rectangular window above the lintel. Foul biting is apparent in the narrow un-etched band around the perimeter of the image.

More etched hatching has been applied throughout the plate so as to better define the woman’s pose, the architectural volumes, and the space. A dark band of etched hatching now defines the lower edge of the lintel’s upper beam, causing it to appear to jut out. The lower part of the window frame is etched with vertical hatching, and two irregular dark patches mark the wall above the squatting woman.

The tonal balance of the print has been changed and it has been lightened overall through extensive burnishing. The two prominent dark patches above the woman have been completely burnished away.

Dark areas of drypoint and etched hatching have been added to the windows above and to the right of the post and lintel, as well as to areas beneath the arch and to the building on the opposite shore of the canal. The posts have been articulated with drypoint [etching?] emphases at their outer edge, and the woman’s hair and back have also been accented. A prominent accidental scratch appears at the lower edge, near the plate mark.

The scratch has been burnished away but no other changes have been made to the plate. There are four variant impressions of this state.

The subject has been burnished and extensively redrawn with drypoint, which accents the essential elements of the architecture and other aspects of the composition, including the shadows. The light of a lamp has been introduced to the left wall of the passageway. Beyond the passageway a second fence, with a V-shaped design, has been added above the existing rail.

Parallel horizontal hatching in drypoint has been added to the upper right corner. The vertical drypoint lines above the passageway lintel have been extended. Drypoint shading has been added above the lamp, and the woman’s hair has been completed.

Several oblique strokes have been added to the woman’s buttocks and thigh.

The oblique hatching on the buttocks has been burnished away.

The woman’s proper right arm has been made thinner and the outline of her thigh has been articulated with drypoint.

The scene depicted here was glimpsed one evening when Amor and a group of friends were out walking. Later, in his small Venice Sketchbook, Amor made a quick drawing from memory of the squatting woman; he returned the next day to where he had glimpsed her, making three sketches of the courtyard, with its distinctive post-and-lintel passageway, and with graffiti on the wall (Perry 2013). The graffiti does not feature in E.145, but does appear in an oil painting made after the print, also in 2007 (Perry 2013).

Amor was never completely happy with the rendering of the woman’s pose through the first five states of the etching and in its first edition, and he therefore decided to rework the figure in drypoint. Before making the changes, he hired a model to strike the woman’s pose for him; the result was a large drawing in pencil, dated 3 July 2007 (Perry 2013). However, further work on the copper plate, towards a second edition of the print, was delayed until 2010, when the artist substantially recast the composition, using drypoint, and, over six states, fine-tuned the figure’s pose.

The 2010 version of the etching is more clearly a nocturnal scene. In its deep black drypoint accents and its rendering of the woman’s bare flesh, it evokes in the viewer a sense of surprise, thus reflecting the sense of surprise originally caused by an inadvertent glimpse of an intimate human act.