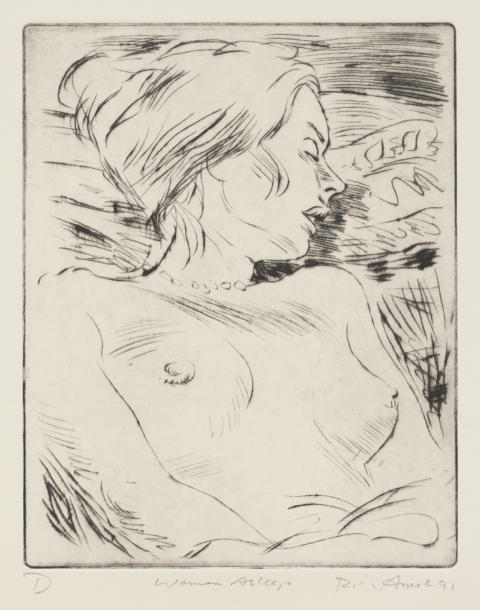 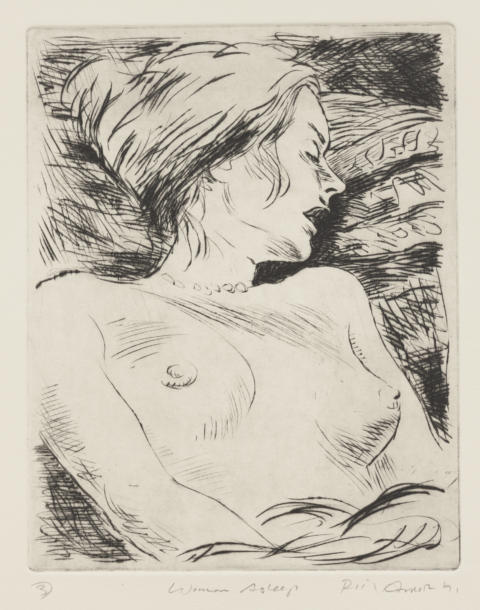 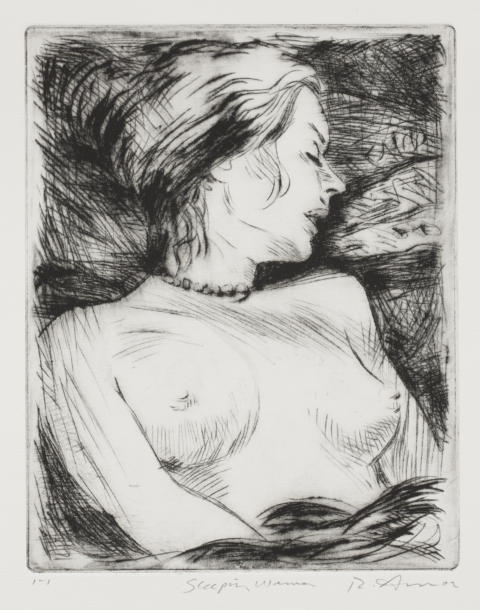 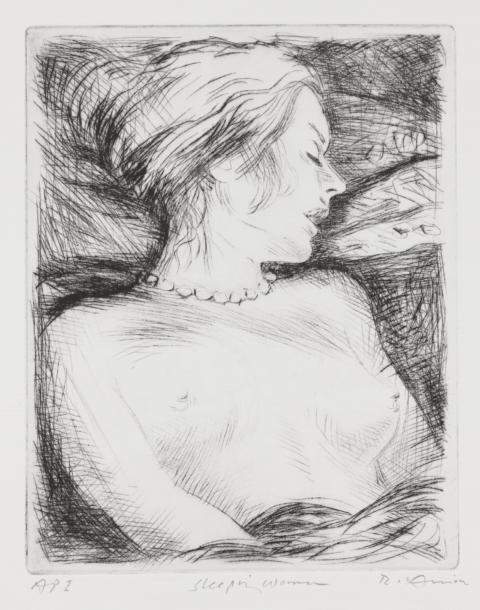 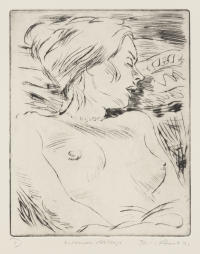 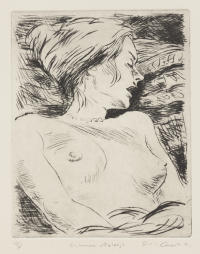 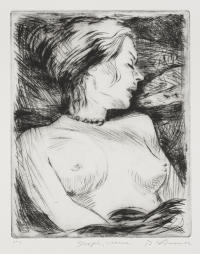 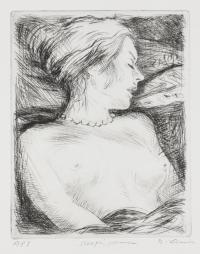 Drypoint. The head and upper torso of a sleeping woman, propped up on pillows. Her torso is bare and her head is turned in right profile. Around her neck is a string of beads. The subject has been summarily drawn on the plate with drypoint.

The woman’s upper lip has been darkened with drypoint, and drypoint hatching has been added to the area around her face in order to cast into greater relief the open-mouthed profile. There are two variant impressions of this state.

The work has been retitled Sleeping woman. More drypoint has been added throughout the background at left and right. Strands of hair have been added to the nape of the neck and to other places on the head, and long oblique hatching has been added to both arms.

More drypoint work has been done on the hair at the nape of the neck, as well as at the back of the head and beside the ear. The torso has been modelled with additional drypoint hatching, and drypoint has also been added to the beads in order to make them stand out more clearly. There are two variant impressions of this state.

Subsequent Title(s)
Sleeping woman
Description of Featured Image
The head and upper torso of a sleeping woman, propped up on patterned pillows. Her torso is bare and her head is turned in right profile. Around her neck is a string of beads. This is the third state of this print. In 2002, the print was reworked through two more states, as Sleeping woman (see cat. no. E.039.1).
Where Made
Dunmoochin, Cottles Bridge. Alphington, Melbourne
Medium Category and Technique
Intaglio Print: Drypoint on copper
Support
Wove paper. Identified papers: Magnani paper with watermark: Romanesque ‘M’ with cross above.
Dimensions
Image size: 254 x 200 mm
Matrix size: 255 x 203 mm
Artist’s Record Number
RAE.33 (1991), RAE.144 (2002)
Printer(s) and Workshop(s)
All impressions printed by Rick Amor. States I through III printed by Amor in his Dunmoochin studio, Cottles Bridge. States IV and V printed in the Alphington studio.
Summary Edition Information
Five states. No edition.
Collections
State Library of Victoria, Melbourne: four state impressions, numbered 1 through 4, all dated 1991 (Woman asleep); two state impressions, numbered 1-1, 1-2, both dated 2002 (Sleeping woman).
Comment

This drypoint is based closely on an undated pencil sketch that Amor drew of his partner, the artist Meg Williams, in a sketchbook of 1988–89. The drawing is one of four that Amor made at around this time, and that he subsequently used as compositional sources for three prints that depict Williams sleeping (see also cat. nos E.022 and E.046).

The first state of the drypoint has all the linear spontaneity of the drawing; the composition is then elaborated tonally through the following four states, and through experiments in wiping the plate.

Despite the fact that eleven years elapsed between the first three states (made in 1991) and the last two (made in 2002), this print – retitled as Sleeping woman in 2002 – retained a freshness to the end. This is in part because the drypoint technique lends itself so inherently to pictorial purposes, and in part because of the manner in which Amor has used it here for its sensuous qualities.