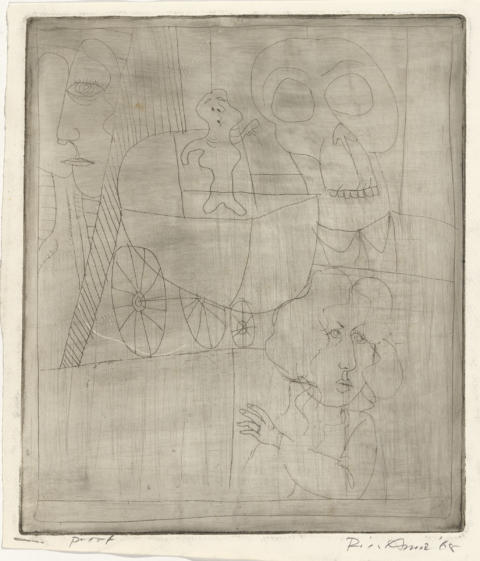 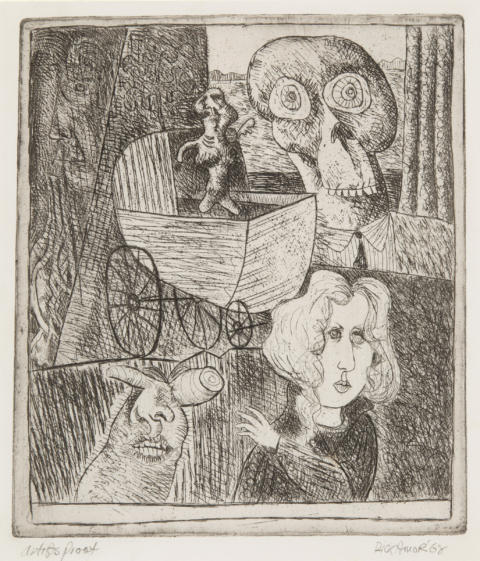 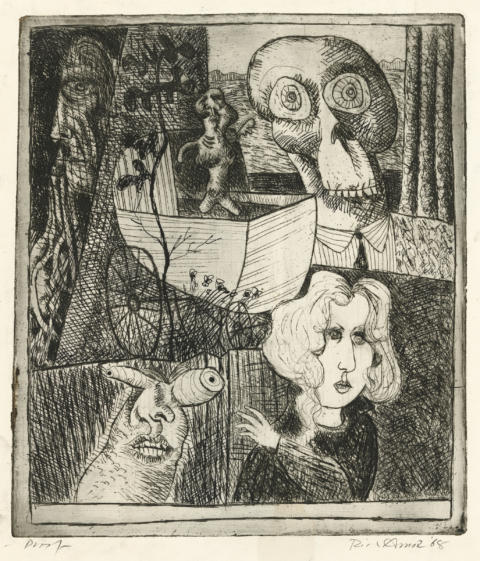 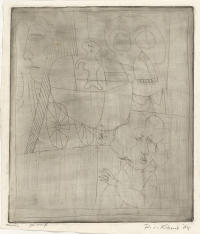 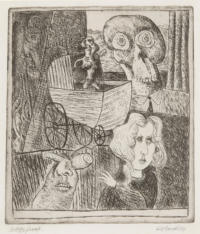 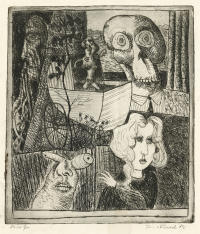 Etching. A surreal concatenation of apparently unconnected motifs: a skull atop a human form in shirt, tie and jacket; a child’s pram, with a little humanoid creature emerging from it; a young woman with wavy hair; and, at the upper left, a youthful female face in Picassoesque double profile. The scene is delineated with pure line etching.

Hatching and cross-hatching have been introduced throughout the plate, creating tonal fields and tonal definition. The face at the upper left has been changed: initially youthful, it is now aged and haggard, with sinuous, rope-like strands of beard issuing from the chin. A misshapen head with eyes like polyps has been added at the base of the composition, and the faint outline of a leafy plant is seen emerging from behind the curtain at the left, above the pram. The space behind the skull is now a window, through which is visible a landscape with mountains on the horizon.

More tonal hatching has been added, most prominently in the dark patch in the lower right corner. The plant, which appeared behind the pram in the previous state, is now emphatically present in front of it, and at the base of this sapling tree grows a clump of flowers. The eyes of the misshapen head below the wheels of the pram have dark pupils now, in place of open circles.

This is Rick Amor’s earliest surviving etching, and one of three extant etchings that were made in 1968, during Amor’s final year at the National Gallery of Victoria Art School. (The artist remembers making a fourth etching, earlier in 1968, depicting girls on a beach, but all impressions of this work appear to have been lost.) The blond-haired woman in E.001 is Angela Berrigan, Amor’s girlfriend at the time; she appears in another early etching (cat. no. E.003), as well as in relief prints and in paintings made at around the same date. The skull is present in other works of this period, notably a linocut, Thanatos and Eros, 1968, in which, as in this etching, it sits atop a body dressed in a shirt and tie.

Behind the sharp, clean contours of the pram lies the influence of Amor’s teacher John Brack (1920–1999), but it is Picasso whose presence is most palpable here. The face with eyes on protruding stems is that of a creature straight out of Picasso’s The dream and lie of Franco etchings, of 1937, while in the first state of E.001 the face at the upper left is clearly redolent of Picasso’s double face profiles of the 1930s.

What arises from this combination of motifs is an allusion to the theme of the cycle of life. The foetus-like creature in the pram is juxtaposed with the skull, while in the second and third states of the print the beautiful young woman at the lower right presents a contrast to the face at the upper left, which has become furrowed and ancient. In the midst of this imagery are the sapling tree and the flowers – symbols of fertility and rebirth.

In 1988, Amor began keeping an intaglio record book, in which he listed by number, and provided details of, his intaglio prints. The four etchings that he made in 1968 are not included in this record.

The copper plate on which E.001 was made has been lost.