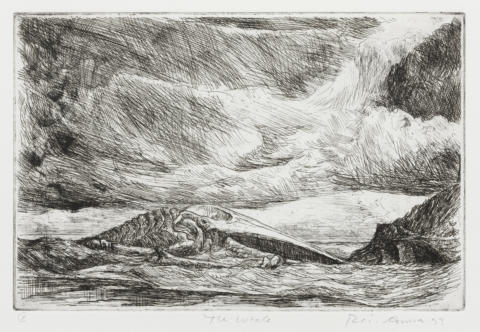 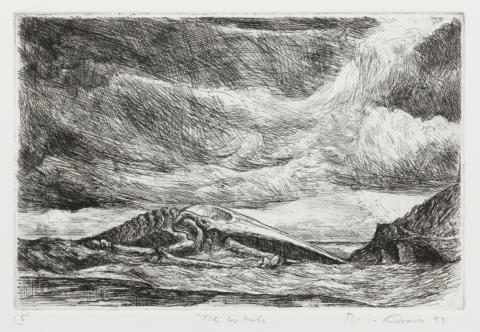 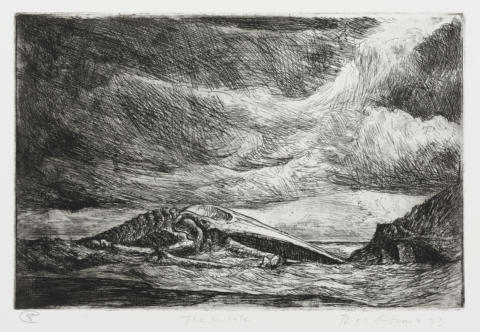 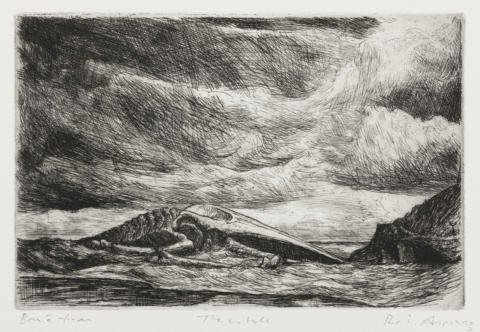 Etching. The skeleton of a whale lies on a beach, at the water’s edge. The sky is filled with clouds. The composition is substantially complete. A small, irregular patch of foul biting appears in the white cloud at the right, just below the dark cloud. Foul biting is also evident in other clouds, at both the left and the right. There are three variant impressions of this state.

A small area of foul biting in the clouds in the upper right corner has been burnished out. There are three variant impressions of this state.

More etched modelling has been applied to the central area of the skeleton; the curved bone above has been selectively burnished.

On 5 May 1992, the body of a 40 tonne, 18.7 metre blue whale, Balaenoptera musculus brevicauda, was found washed up on the beach at Cathedral Rock, near Lorne, on Victoria’s south-west coast. The whale’s bloated carcass was transported to the Werribee Sewage Treatment Complex, in Melbourne’s outer west, where a post-mortem was undertaken by a team of veterinary surgeons. The flesh was removed from the whale’s carcass, and the bones were later placed in the Werribee sewage ponds to macerate, that is, to be cleaned naturally by sewage bacteria. The articulated skeleton of the blue whale, a rare and threatened species, is now one of the treasures of Melbourne Museum, where it is on permanent display.

On 17 May 1992, as part of Melbourne Water’s centenary celebrations, the Werribee treatment plant was opened to the public, who came in droves to see the remains of a remarkable creature. Among the crowd of six thousand who attended were Rick Amor and his friend the artist Mike Nicholls (b. 1960). Amor remembers the foul stench of the whale’s putrefying flesh, but he was able to withstand the smell and to paint on site a small oil of the carcass, and to take several photographs for reference. Some months later, in September 1992, he painted in his studio a variation of the subject of his small oil, shifting the setting from inland Werribee, bathed in the high colour of midday, to the coastal beach where the whale was found; the new composition included a bank of black clouds, lying low above the skeleton (Niagara Galleries 1993).

The present etching follows the studio painting but is oriented in reverse direction. In making his print, as is always the case, Amor also adjusted the image to the slightly different format of the copper plate, showing the subject viewed from a greater distance and beneath a bigger sky. Throughout the process of creating E.078, the artist experimented in his wiping of the plate, printing impressions that vary widely in their tonal effects. This approach extended to the printing of the edition.

When he made this etching, Amor was unaware of the engraved representations of beached whales made by artists working in the sixteenth and seventeenth centuries. The appearance of a beached whale at certain times in earlier centuries was greeted as an omen of impending disaster. Although Amor’s whale is a skeleton and not the mammal itself, his etching may fruitfully be considered within the context of the history of representations of this animal. Having seen the remains of the whale and having painted what he saw, Amor then reimagined the creature and, as with the squid in works such as The sea (with giant squid), 1989 (cat. no. E.012), invested it with a sense of portent and menace.