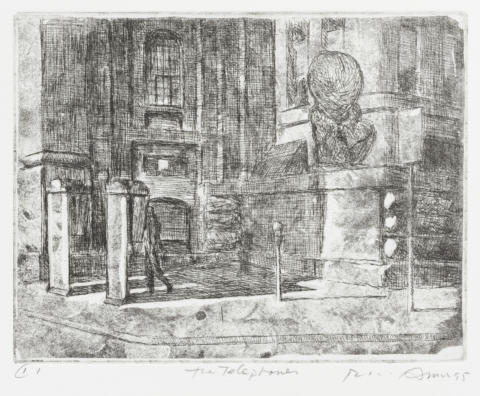 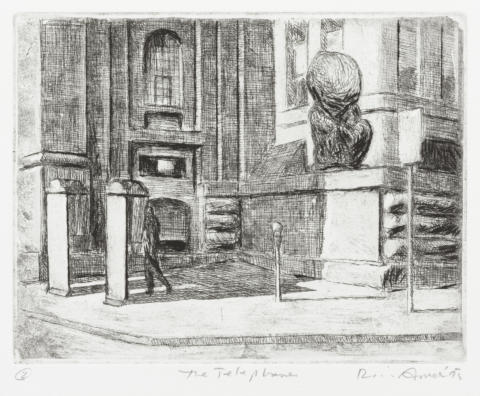 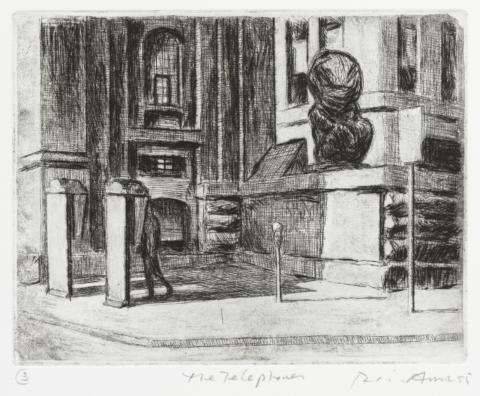 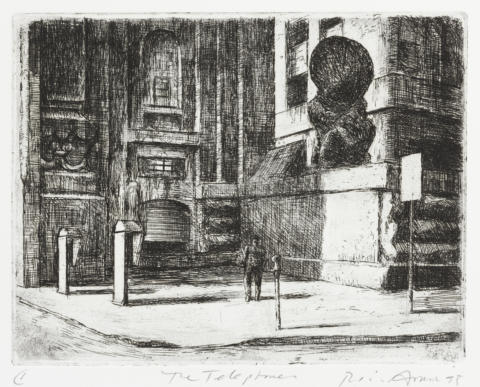 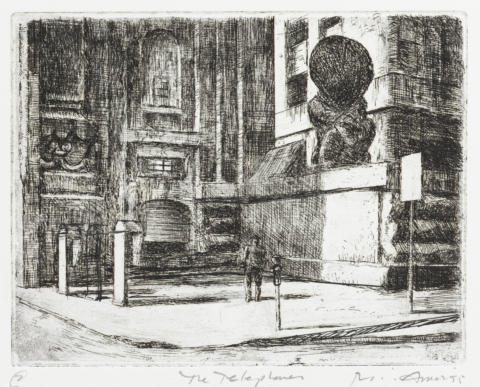 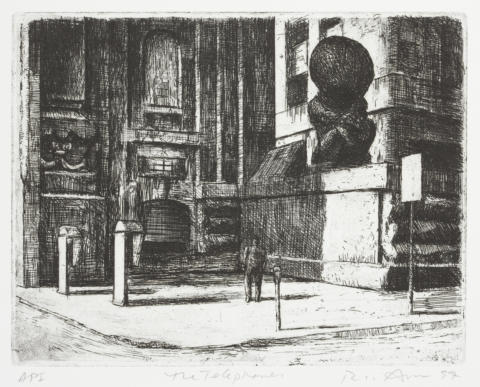 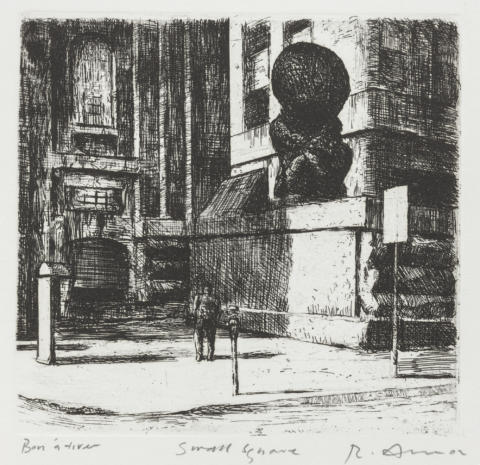 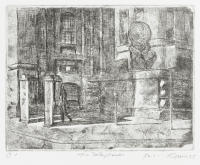 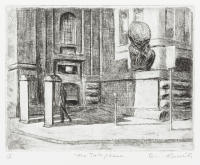 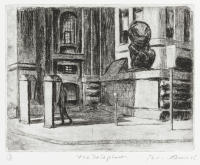 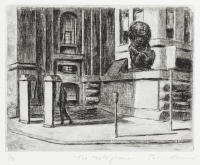 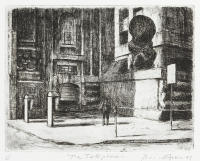 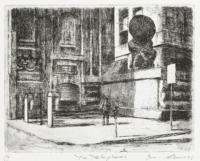 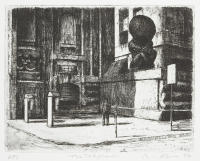 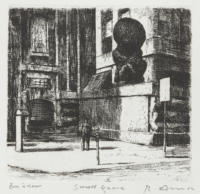 Etching. A view of a small public square, on a street corner, flanked on two sides by buildings. Abutting the building at the right is a tall plinth, which supports a sculpture of an enormous foetus. At the left edge of the square are two phone booths; one of them is being used by a man. Just to the right of centre is a parking meter; to the right of this is a blank road sign. There are two variant impressions of this state.

Considerably more drypoint has been added, to better define the architectural details, the sculpture, the phone booths and the man.

Drypoint has been added to the shadow behind the man and to the road in the lower right corner.

The plate has undergone major changes, and much of the drypoint burr has been removed. The height of the kerb is now irregular; at the right of the corner, it slopes towards the road. The phone booths have been made smaller, the man using the phone booth has been burnished out, and another man is depicted walking towards the buildings. The parking meter’s post has been shortened. Much of the architecture has been re-etched, and new decorative details have been added at the centre left. The sculpture of the foetus has been substantially remodelled. There are two variant impressions of this state.

Impression VII.b is extensively touched with pen and indian ink, with the amendments to the image including the following: the kerb at right has been moved obliquely upward; the diagonal of the bottom of the plinth has been altered, while the lower edge of the top part of the plinth has been made more strongly diagonal; the parking meter has been substantially lowered in height; and a third phone booth has been sketched between the two existing ones.

Some of the changes announced by the touched impression of the seventh state (VII.b) have now been incorporated. In particular, the parking meter has been shortened, allowing the plinth’s recession to be extended towards the back (the rear edge of the plinth is now clearly articulated), while the angle of the kerb, at the right, has been adjusted. Foul biting tone, which had become increasingly prominent during the printing of the second edition, has been burnished back in the area of the square. The reworking of the plate in this state has not been noted in the artist’s intaglio record books. There are three variant impressions of this state.

The plate has been cut down along the left side, leaving just one phone booth. The matrix now measures 159 x 167 mm, and the work has been retitled Small square.

With its urban setting and giant foetus sculpture, this etching follows, and is closely related to, The Bureau, 1995 (cat. no. E.090). The presence in E.100 of public telephone booths, however, projects the subject of this work away from the literary world of Aldous Huxley, which inspired The Bureau, and into an identifiably contemporary realm. The architecture at the left of the image is imagined: it is an amalgam of observed details, but is based largely on the Little Lonsdale Street facade of the State Library of Victoria, although architectural ornament from other buildings was incorporated in the seventh state.

This work exists in three main versions, the first two dating from 1995, the third produced seven years later, in 2002 (cat. no. E.100.1). Rick Amor has described the long process of creating this print, intermittently across several years, as an example of the fact that great patience is needed in the making of an etching.

The first version of the image, which encompasses states I through VI, includes the figure of a man at one of the phone booths. Amor was clearly dissatisfied with this version – in editioning it, he printed just two impressions. Speaking to Gary Catalano in 1996, the artist explained the reasons for his dissatisfaction and described how he had proceeded with the etching:

There’s a painting called The Telephones. I did a drawing first, then a print. Then I based a painting on the print, but because there were some areas in the painting I didn’t like I changed it and did another print based on that print. In the initial print there were certain things that were wrong with the perspective and the placement, which I only noticed when I made the first painting from it. (Quoted in Catalano 1996)

The major revision to E.100, in its seventh state (which followed the tiny first edition), was the removal of the figure at the phone booth and the insertion of another figure of a man, who is seen from behind, walking, hands in pockets, towards the buildings. The seventh state also saw the phone booths reduced in size. With the newly added figure smaller than the figure that had been burnished out, and the phone booths now smaller, the scale of the sculpture and the buildings increased commensurately.

Thus, in the second version of the plate, which encompassed the seventh and eighth states, the internal scale of the composition was dramatically different from that in states I through VII. In the eighth state (1997), which is not documented in Amor’s intaglio record books, the artist changed the angle of the kerb at the right so that it extended along a receding diagonal, thereby establishing a greater distance between viewer and subject.

The third and final version of the print was made in 2002, when the plate was cut down to an almost square format and the print was retitled Small square. The cutting down of the matrix eliminated the strip of decorated architecture at the left edge of the composition, together with the phone booth at the far left. The result is a smaller, more condensed, and starker, image.