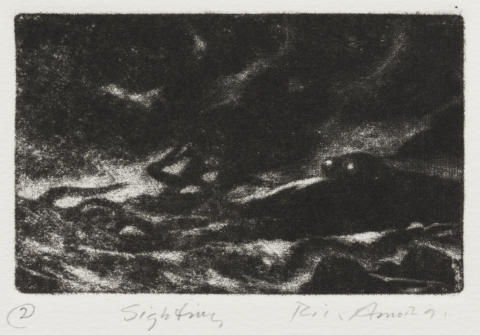 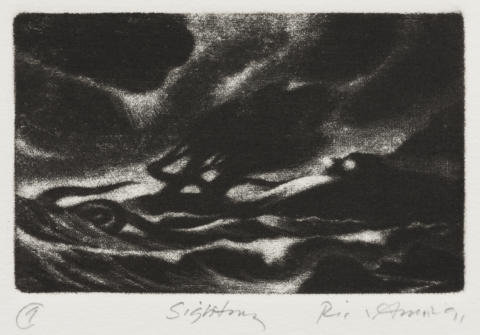 The car’s headlights now appear, illuminating the contour of the hill. The waves in the foreground are more distinct, as are the irregular horizon, the squid’s raised tentacle, and the windswept tree. The impression appears dry, especially in the lower left area.

The squid’s raised tentacle and the area immediately below have been further burnished to make the tentacle stand out with greater clarity.

This mezzotint is based closely on a small oil painting of the same title, dated 1992 and April 1991 (Menzies 2015), but is oriented in the reverse direction. Compositionally, the one significant difference between the two works is in the depiction of the squid, whose tentacles remain coiled in the painting but have begun to unfurl in the print. The entire scene is imagined.

The giant squid first appeared in Amor’s prints in 1989, initially in The sea (with giant squid) (cat. no. E.012) and then in The sea (cat. no. E.015). Both of these etchings have a mythic, timeless quality, since they contain no details that might anchor them in an identifiable moment in time. By contrast, in The sighting, the mythic scene is disturbed by the intrusion of the car, and with it a modern, albeit unfathomable, narrative; hence the strange, unsettling nature of the image.

The nocturnal subject matter of E.041 is perfectly matched to the mezzotint technique. Amor took this print through nine states, adjusting the plate in small increments with the burnisher, in order to elicit the precise tones and effects of light that he wanted.