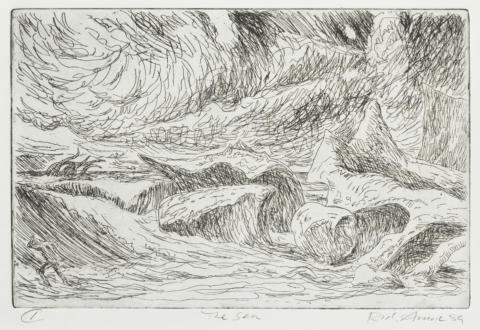 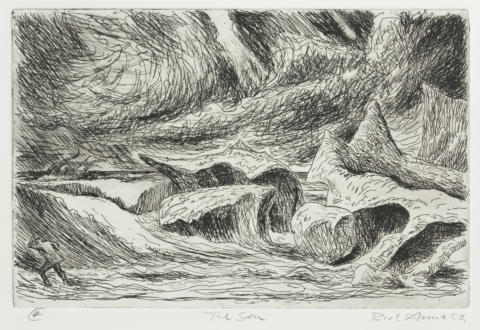 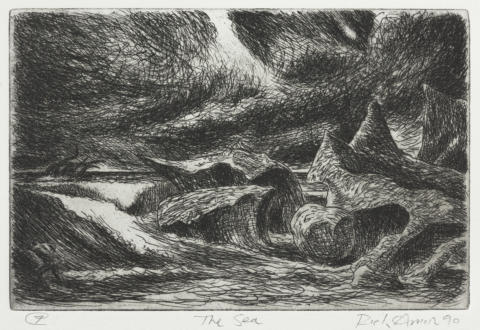 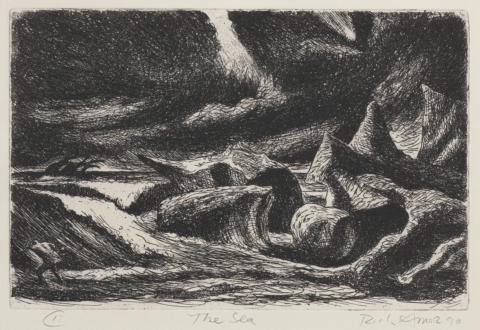 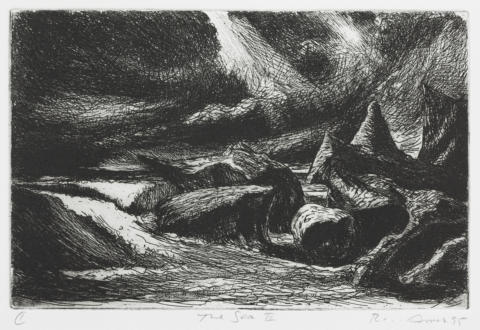 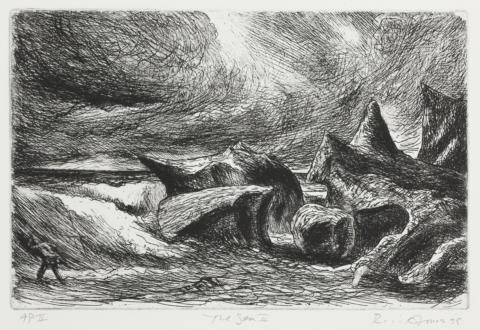 Etching. A view of a shore and the sea during a fierce storm, with large, jagged rocks at right. At the lower left, in front of the huge waves, a man appears to be walking into the water. On the horizon at the centre left, the tentacles of a giant squid emerge from the sea. The subject is etched in a sketchy manner, but one that immediately conveys a turbulent atmosphere.

Oblique hatching has been added to the sky at the horizon at left, indicating sheeting rain. There are two variant impressions of this state.

Oblique lines of etching have been added to the spherical rock, the rock above, and the area below the rock formation.

Aquatint has been added to many of the dark areas, in order to intensify the black tones. There are three variant impressions of this state. Amor’s intaglio record book notes that he also printed one proof, described as ‘burnished’; this has not been identified.

The work has been retitled The sea II. The squid at centre left and the man at the lower left have been obliterated with strong lines of drypoint. The areas of aquatint in the central foreground have been burnished and drypoint has been added to the shadows on the rocks.

The figure of the man in the lower left corner has been reinstated with drypoint, and the tonality of the whole plate has been calibrated to a lighter tone through a combination of burnishing and accents of drypoint.

This etching, begun in 1989, takes its cue from a print made earlier in the same year, The sea (with giant squid) (cat. no. E.012). E.015 is one of a number of works that Amor made in the late 1980s and 1990s in which the sea became the setting of nightmarish experience. Here, rocks, sky and sea all appear to seethe, as though in an apocalyptic dream – wherein the whole of nature rises up and threatens obliteration.

The first version of the etching was taken through nine states and completed in 1990. It showed a giant squid on the distant horizon at left, and a lone male figure in the lower left corner, seemingly about to plunge into the sea. Aquatint was added in the ninth state so as to intensify the darkening mood of the image.

Amor returned to the etching in 1995, changing its title and reworking the plate, using both etching and drypoint. First he removed the squid, by scoring over it in drypoint, and then he burnished it out altogether; he also caused the man to disappear completely, by casting him in dark drypoint shadow. The figure began to reappear in the penultimate state and was again a clear presence in the thirteenth and final state. In making this final version of the image, Amor lightly burnished much of the plate, creating an eerie atmosphere by having an unearthly light now stream from the sky at the upper centre, illuminating the entire scene.