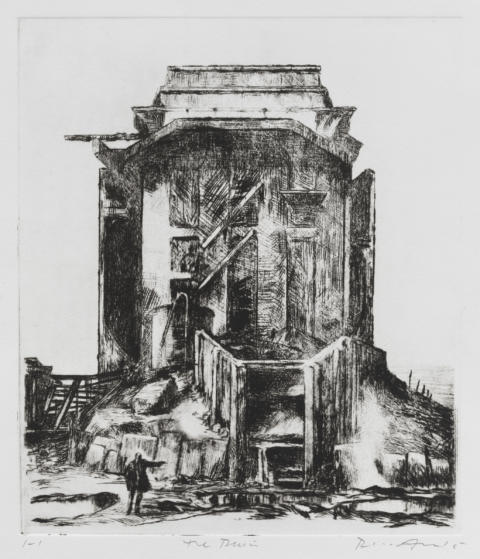 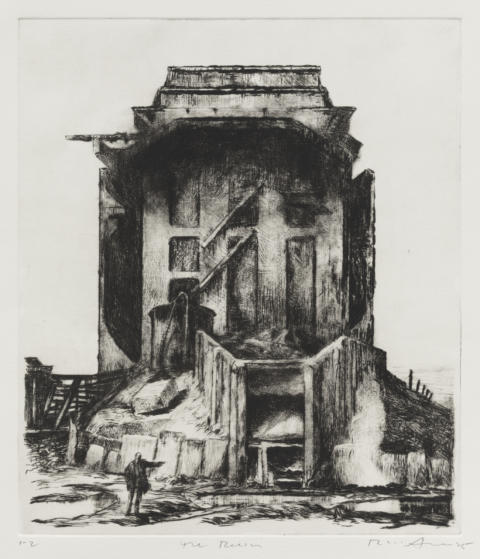 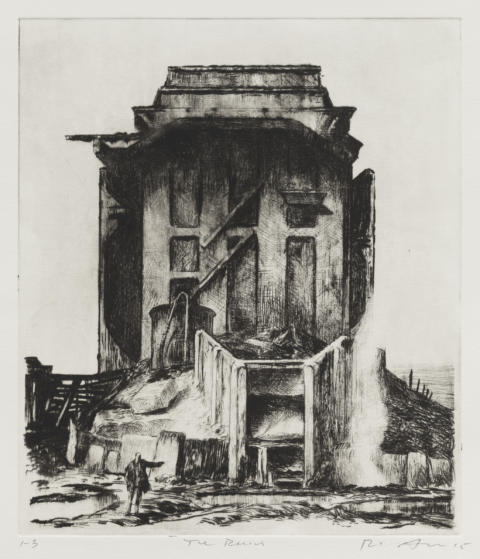 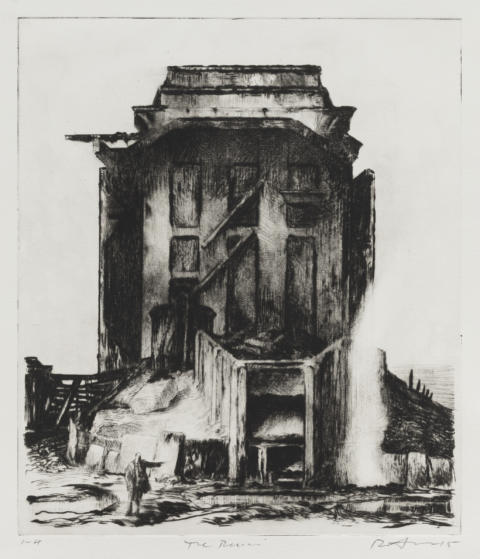 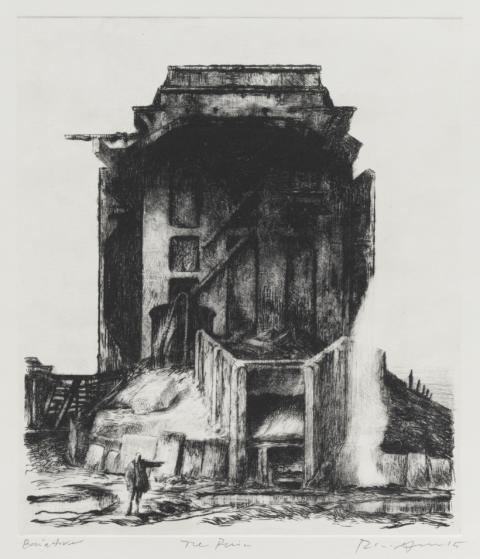 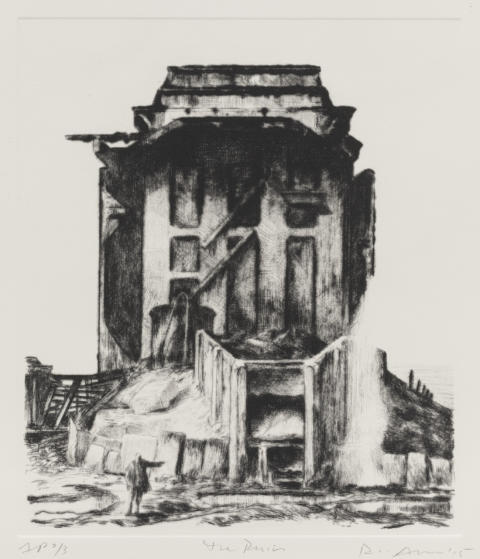 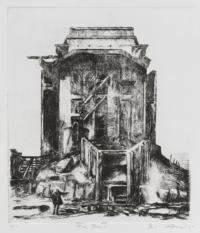 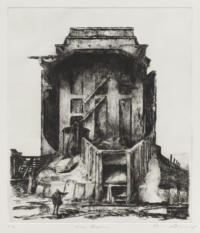 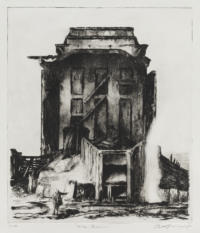 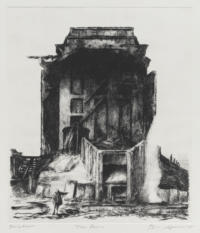 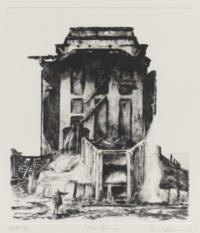 Drypoint and burnishing. An industrial ruin of a tall concrete structure dominates the scene. In front of the ruin, at the lower left, stands a man who points towards it with outstretched arm. He stands in a muddy space between three pools of water; immediately behind the pool on the right is a smoking fire. All essential details of the composition are present but the drypoint is sketchily scored in the central area of the structure.

Much drypoint has been added throughout but it is especially noticeable on the structure. At the same time, the subject has been carefully burnished to clarify and to model its details. Rising billows of smoke have been burnished into the fire.

The smoke has been burnished further and now rises even higher, obscuring the lower right of the building.

Further burnishing has been applied to the smoke, and the left side of the figure has also been burnished.

The sloping area with rocks below the structure at left has been burnished.

Catalogue Number
E.176
Title and Date
The ruin 2015
Description of Featured Image
An industrial ruin – a tall concrete structure – dominates the scene. In front of the ruin at the lower left stands a man who points towards it with outstretched arm. He stands in a muddy space between three pools of water; immediately behind the pool on the right is a smoking fire.
Where Made
Alphington, Melbourne
Medium Category and Technique
Intaglio Print: Drypoint and burnishing on copper
Support
Wove paper. Identified papers: Somerset paper; Hahnemühle paper with watermark: cockerel within a circle.
Dimensions
Image size: 350 x 300 mm
Artist’s Record Number
RAE.219
Printer(s) and Workshop(s)
All state impressions, a bon à tirer impression and an artist’s proof printed by Rick Amor in his Alphington studio. Edition printed by Deanna Hitti at the Baldessin Press, St Andrews.
Summary Edition Information
Five states. Edition of twenty-five numbered impressions, 2016; edition impressions dated 2015 (this being the year in which all states were completed).
Literature
Baldessin & Friends: A Commemorative Folio (catalogue accompanying portfolio), Baldessin Press & Studio, St Andrews, Victoria, 2016, pp. 23–5 (illustrated).
For a review of Baldessin & Friends: A Commemorative Folio, see Victoria Perin, ‘Baldessin and Friends: Commemorative Folio’, Imprint, vol. 51, no. 4, Summer 2016, pp. 42–3. The ruin is illustrated on p. 43, as illus. B.
Comment

The subject’s original antecedent is a plein-air painting done around 2002 in the environs of Broken Hill, a mining town in outback western New South Wales. However, in its present form the work is a composite picture, its lower half based on the rusted industrial detritus found around the disused mines and mining plants of Broken Hill, and its upper section – the ruin itself – on a photograph, taken by Amor, of parts of a broken ship.

The drypoint belongs to a group of variant images of the subject painted around 2015­–16 in oils and watercolour. One of these variants, Ruin II (painted between December 2015 and July 2016 and not exhibited as of April 2017), was made after the drypoint and is oriented in the same direction.

The progression of the drypoint through its five states is straightforward, beginning with a generally resolved first state, through a series of tonal refinements, to the brooding final state. The image, with its tiny figure pointing towards the ruin, refers directly to the passing of time, the vanity of earthly things, and their inevitable end in decay and death.

The fantastic decrepit structure, the pointing man and the smoking fire all indicate Amor’s familiarity, and underlying affinity, with the spirit of Piranesi.