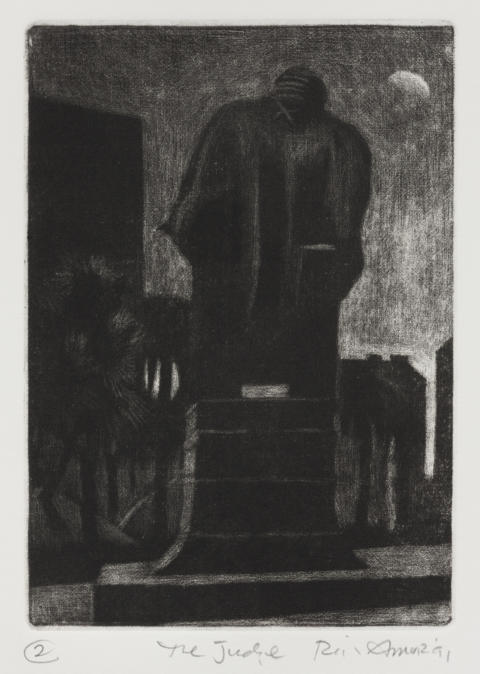 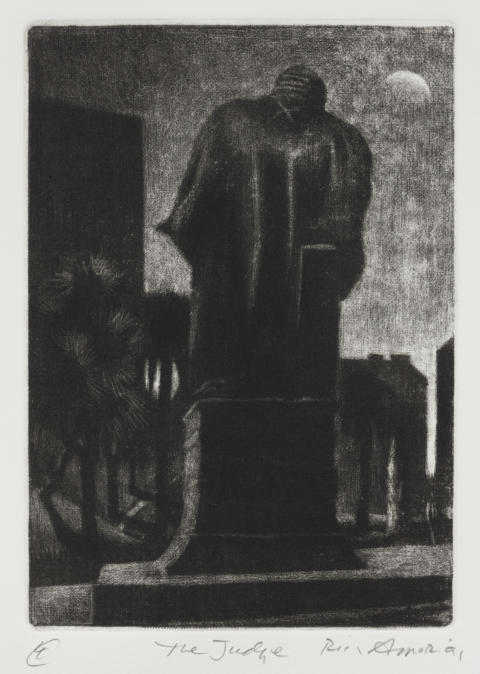 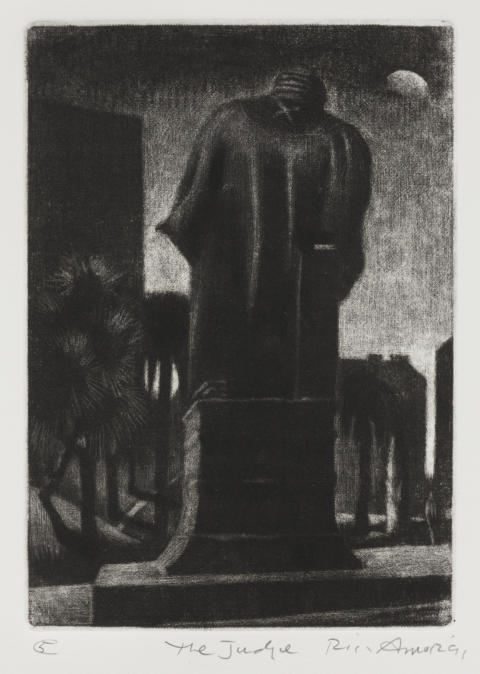 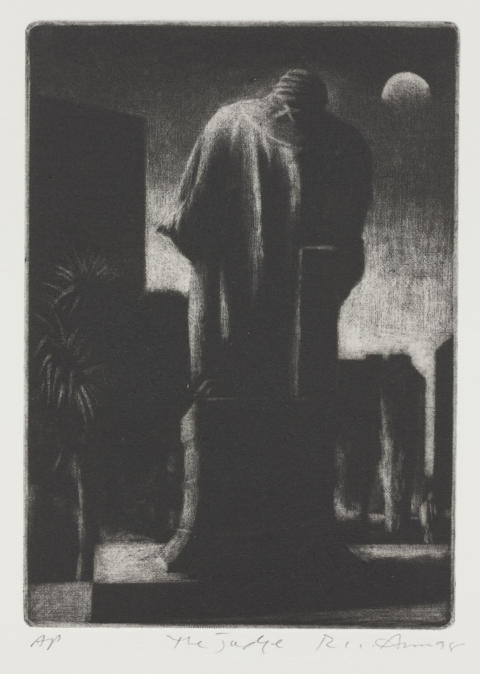 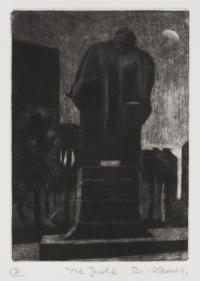 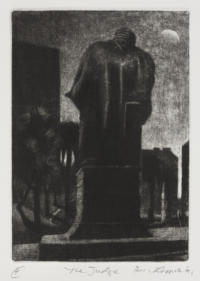 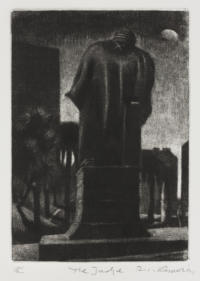 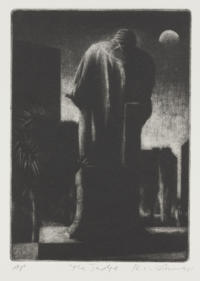 Stronger highlights have been burnished into the robes, the sky has been lightened, and numerous areas of the composition have been burnished in order to clarify the subject. The figure of a man now appears in the shadows at the lower right of the image, just below the gap between the buildings.

The upper part of the sky has been reworked with the mezzotint rocker and is now darker. The robe has been defined more clearly and its light areas have been tonally evened out.

The wig, the left shoulder, and the robe at left, have been made considerably lighter. The figure now appears distinctly to be leaning forward and to the right. The trunks of most of the trees at the lower left have been removed, though the spiky foliage remains. The three intervals of light between the trees in the middle left distance have been removed.

The statue in this work is based on the Edmund FitzGibbon Memorial, by James White, a bronze funded by public subscription in Melbourne in the early twentieth century. Edmund FitzGibbon (1825–1905) was a civic administrator in nineteenth-century Melbourne; born in Ireland, he arrived in Australia in 1852, became town clerk of Melbourne in 1856, and was admitted to the Bar in 1860. His memorial statue, unveiled in 1908, was initially situated at Princes Bridge but has been moved several times since. When Amor first depicted it, in 1988, it was located in Spring Street, near the Princess Theatre. It now stands on the corner of St Kilda Road and Linlithgow Avenue, Melbourne, diagonally opposite the National Gallery of Victoria.

Amor’s earliest representations of the FitzGibbon Memorial are two watercolour drawings in a small sketchbook from 1988: one of these shows the statue on its tall pedestal, rising high above its setting in public gardens; the other shows just the figure in its voluminous robes. In 1989, Amor made the sculpture the subject of a painting, which is compositionally similar to E.047 but in reverse orientation (Geelong Gallery). In 1990, the statue appeared in a woodcut titled The judge, with the final manifestation of the image occurring in the present mezzotint. In all of these depictions, the figure of the lawyer, seen from behind and from a low viewpoint, takes on a looming anonymity, standing for something beyond itself. Writing of the 1989 painting, Gary Catalano observed that it ‘cows us through its forbidding bulk’ and inspires fear (Catalano 2001). E.047, although smaller in scale, is comparable in character and in the atmosphere it conveys.

Amor brought to the mezzotint the inspiration he found in Franz Kafka’s novel The Trial (Der Prozess; first published 1925) and in Orson Welles’s 1962 film of the book. The artist saw the Welles film before reading the book, and remembers the scene in which K met the painter Titorelli and saw his painting propped up on an easel (a scene drawn from the book). This painting depicted a figure who looked like an enlarged dwarf, and it is just this sense of dislocated scale that characterizes E.047. Stephen Coppel sees in the print’s ‘domineering monumentality’ and anonymity the ‘implication … that justice is blind. The shadowy highlights created by burnishing the heavily worked mezzotint plate lend the moonlit scene its curious amalgam of Kafkesque nightmare and De Chirico’s deserted public spaces’ (Coppel 2011).