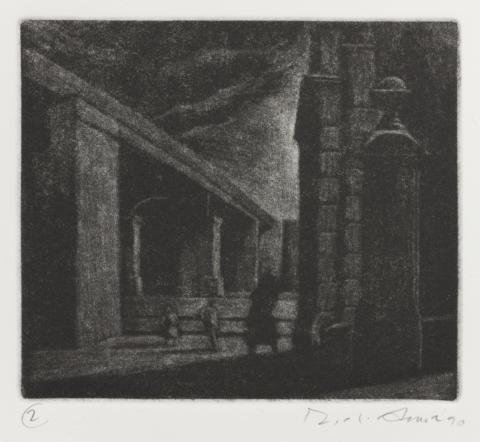 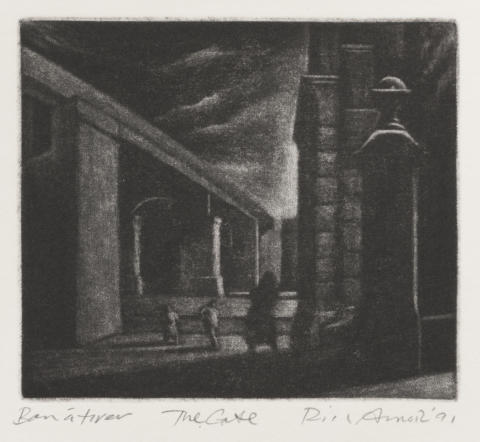 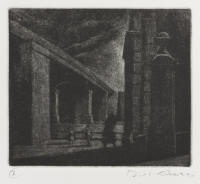 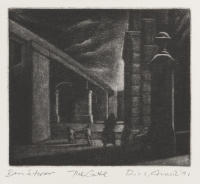 The composition has been evened out tonally and the figures are now better defined. Burnishing has brightened the highlight near the centre of the plate.

The tonal transitions of the light tones have been smoothed out and these areas slightly lightened with the burnisher. The triangle of light in the lower right corner has been burnished more evenly.

Catalogue Number
E.029
Title and Date
The gate 1990
Description of Featured Image
The curve of a large overpass dominates the left half of this composition, while the scene is bounded at the right by the front part of a nineteenth-century building, at the corner of which is a stone pillar topped by a sphere. In the intervening space between the two structures stand three figures; the one closest to the foreground is depicted in silhouette. One of the two central piers of the overpass is strongly illuminated, as are parts of the ground, and light emerges in the sky at the far centre right.
Where Made
Dunmoochin, Cottles Bridge
Medium Category and Technique
Intaglio Print: Mezzotint on copper
Support
Wove paper. Identified papers: White Fabriano paper with watermark: ‘CMF’ with star above, within a circle/oval; cream Stonehenge paper.
Dimensions
Image size: 107 x 139 mm
Matrix size: 121 x 140 mm
Artist’s Record Number
RAE.25
Printer(s) and Workshop(s)
All impressions printed by Rick Amor in his Dunmoochin studio, Cottles Bridge.
Summary Edition Information
Six states. Edition of ten numbered impressions, 1991.
Exhibitions
Niagara Galleries & NETS Victoria 1993–94: Niagara Galleries & NETS Victoria, Melbourne, Rick Amor & the Graphic Arts, Victorian and Tasmanian tour, 1993–94, no. 43, where dated 1991.
Literature
For an account of the subject matter of this print, and an illustration of the painting The gate, 1990, see Gary Catalano, The Solitary Watcher: Rick Amor and His Art, Melbourne University Press, Carlton South, Victoria, 2001, pp. 108–9 and pl. 16, opp. p. 103.
Collections
State Library of Victoria, Melbourne: seven state impressions, numbered 1 through 7, all dated 1990; bon à tirer impression, dated 1991.
Art Gallery of South Australia, Adelaide: AP, dated 1990 (2015G134).
Comment

This mezzotint is based closely on a painting of the same title, also made in 1990 (Catalano 2001), and is oriented in the same direction. In turn, the mezzotint became the model for a woodcut, similarly titled and again made in 1990. Catalano (2001) describes the location depicted in E.029: ‘the road and overpass in The Gate are based on the junction of Market and Flinders streets [Melbourne] though the architectural elements on the right-hand side of the painting are taken from the Supreme Court building in another part of the city’ (p.108). Catalano also notes that the overpass seen in the painting is based on one of Amor’s photographs, but has been completely transformed; this, one might add, is true of the motif as rendered in the print as well.

E.029 is Amor’s second mezzotint and he managed to complete it without resorting to etching, as he had done in North Devon, made earlier in 1990 (cat. no. E.024). Unlike the painting, with its sulphurous colour reminiscent of a sudden, illuminating flash, the mezzotint has a tonality that is characteristically dark and mysterious. Amor coaxed the image out of darkness in small increments, over six states, using the burnishing tool carefully so as to keep in balance the light and the dark tones.