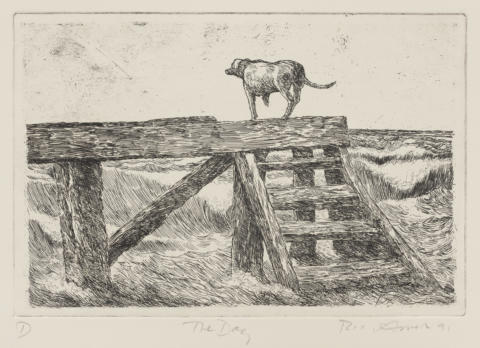 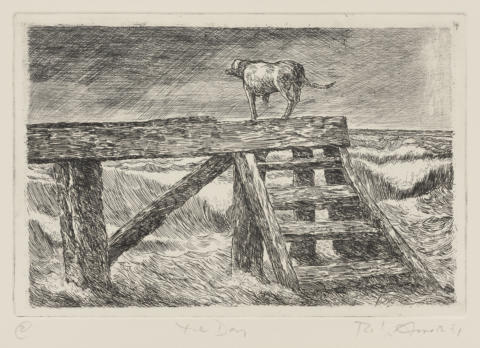 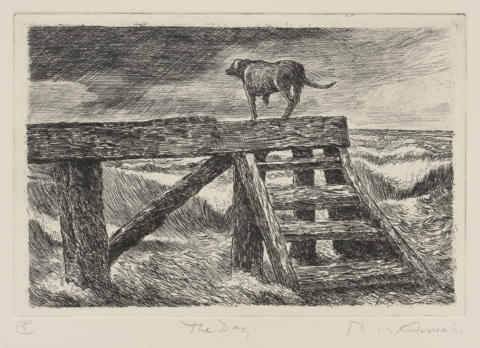 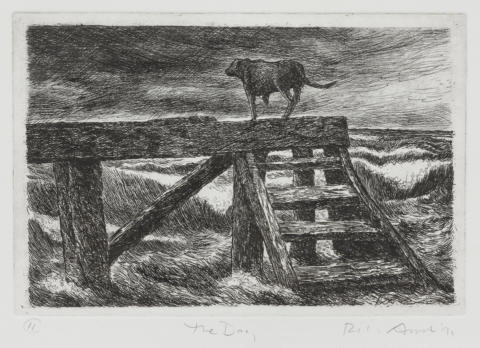 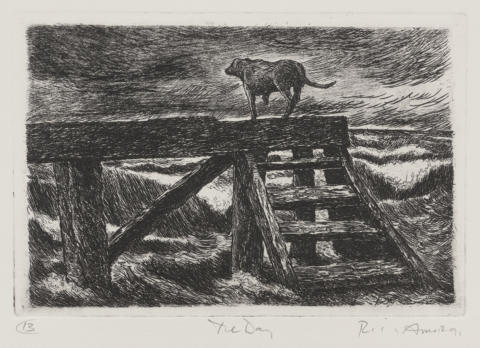 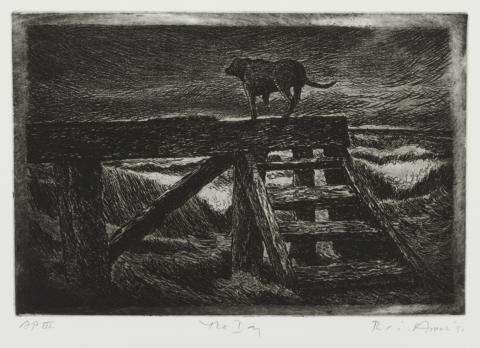 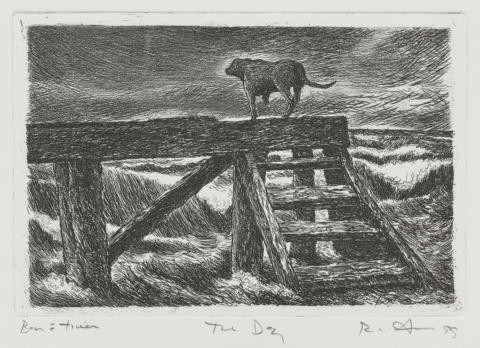 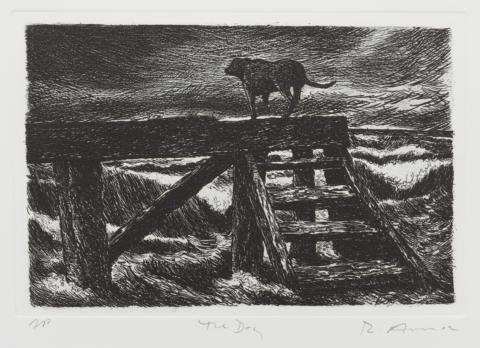 Etching. Standing at the end of a pier amid stormy seas is a dog facing left, his front right paw raised. Below him are wooden steps leading into the water. The subject is lightly etched and the sky is blank.

The sky is now covered with fine etched cross-hatching, but a patch at the upper right has been burnished.

Fine lines of hatching have been added throughout the sky, and to the sea below the pier at the centre left. There are seven variant impressions of this state.

Impression V.g is extensively touched with pen and ink, in the sky and in many areas of the sea.

More etched lines have been added to the sky so as to increase the stormy effect. There are five variant impressions of this state.

Parts of the sky at the upper right and to the left of the dog have been burnished, but billowing clouds have been lightly etched into the burnished areas of sky. There are five variant impressions of this state.

The plate was reworked in February 1999, with the area around the dog’s muzzle burnished.

The area around the dog’s muzzle has been further burnished.

This etching is based on an earlier painting by Amor, The dog, 1989 (Short 2008). The motif of the dog in the painting is, in turn, based on a photograph by Eadweard Muybridge (1830–1904) of his dog, Dread, taken as part of Muybridge’s investigations into animal locomotion. For Amor, however, the dog is not a creature of scientific interest but an animal avatar, who stands in for the silent, watchful observer.

It [the motif of the dog] probably goes back to seeing Francis Bacon’s work. He did a wonderful picture of a dog based on Muybridge’s photographs. I was doing dogs before seeing it but in a minor way.

I see the dog as being a figure of endurance. It watches things and things happen to it, but it cannot alter its fate. Yes … sort of dumb fate. It’s hard to put into words because it’s a visual thing with me. (Quoted in Catalano 1992, p. 5)

In the year before he made this etching, Amor was invited by Grazia Gunn of the Australian Centre for Contemporary Art, Melbourne (ACCA), to prepare an exhibition as part of a series titled The ACCA Wallpapers, which called for mural-sized drawings to be made on huge sheets of paper. The motifs of the dog, the runner and the sea all featured in Amor’s exhibition, which was acclaimed for its emotional power. The dog in the artist’s charcoal mural was different from the one that appears in E.037; however, its symbolic potency prefigured that of Amor’s later representations of the animal. A dog is also depicted in two relief prints of the period, albeit in different poses.

Amor took the present etching through eight states, and many variant printings, before editioning it in 1991. There are no fewer than seven impressions of the fifth state, the seventh impression being extensively worked over, in pen and ink, with indications for major adjustments to be made to the plate. These changes were implemented in the sixth state, when the plate was re-etched, resulting in a darker image overall.

In 1999, some eight years after printing the first edition of E.037, Amor returned to this work, clarifying the outline of the dog’s muzzle by burnishing around it; he then had a second edition printed, at the Australian Print Workshop. In 2002, he fine-tuned the muzzle area again with the burnisher before the third and final edition was printed, at the Baldessin Press.