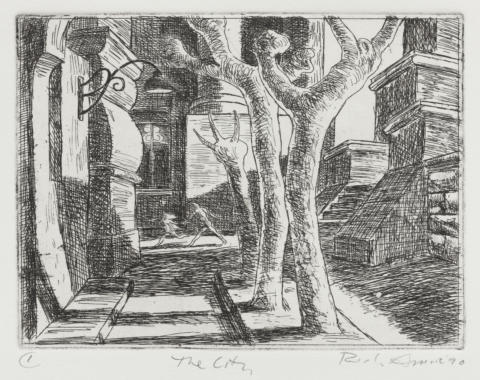 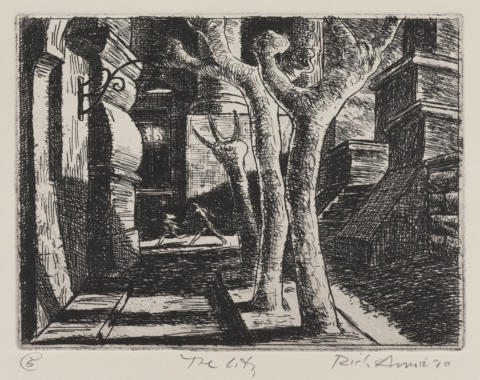 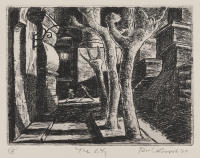 Etching. A night-time scene in a city street surrounded by nineteenth-century buildings, with stone steps at the right and three pruned plane trees on the central verge. A decorative iron street lamp is attached to the building at left, and lights glow in a window in the far distance. In front of the distant building is the small figure of a young girl; behind her is an older, taller person. The subject has been etched to an advanced stage of completion, but remains tonally light.

The triangular shadow at the base of the building nearest the figure of the girl has been lightened by burnishing. There are three variant impressions of this state, including a maculature.

The subject of E.023 is closely related to that of an etching begun earlier in the same year, The city, 6 am (cat. no. E.019), its architectural features reconstituted or changed, but still recognizable. In place of the single tree at the centre of the earlier etching, there is now a deeply receding row of three trees, the one furthest away having three sharp, claw-like pruned branches, which introduce a note of incipient aggression. The two figures in both works have been identified by Amor as a former girlfriend, Genny, who was a gymnast, and her young daughter.

The composition of E.023 was largely resolved in the first state. However, the plate was re-etched in the third state, with the result that the image was rendered darker and more dramatic, with striking contrasts between light and dark.

A colour woodcut of the same title was made in 1991; however, that print shows a completely different composition.

For further discussion of the subject matter of E.023, see Comment in entry for cat. no. E.019.