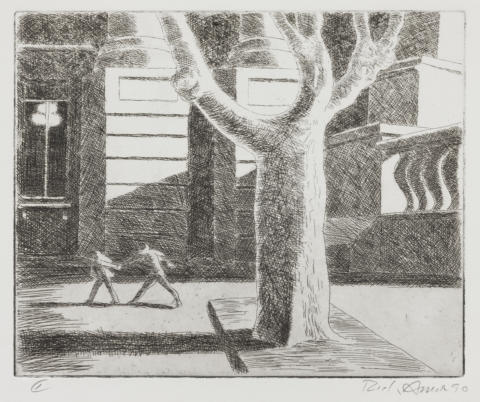 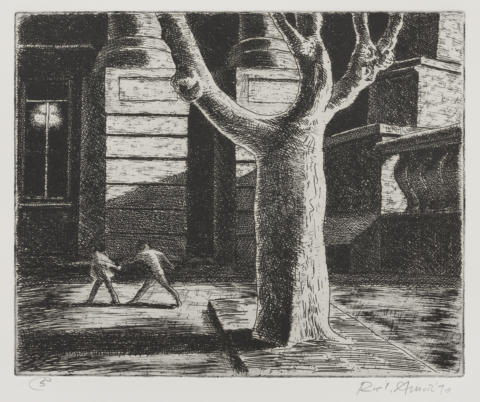 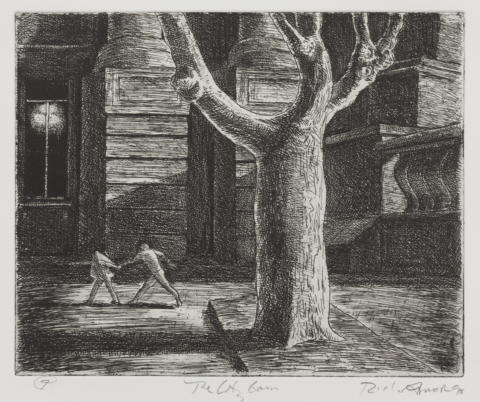 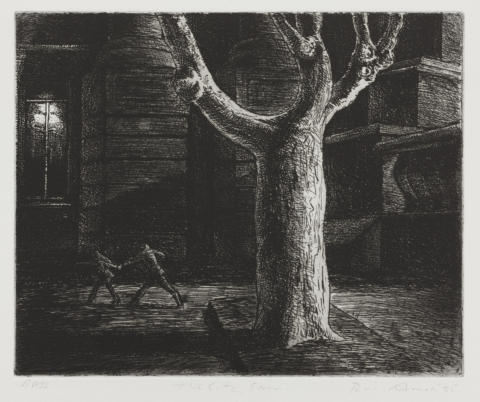 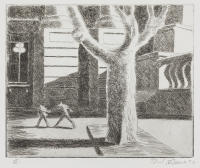 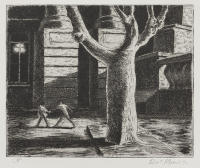 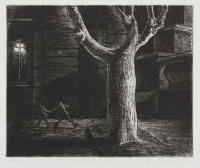 Etching. A night-time scene in a city street bounded by nineteenth-century buildings, with a large, pruned plane tree to the right of centre. A window at the centre left margin is illuminated by a lamp with four globes. Outside the window, in the mid left distance, are two figures: the striding figure of a young girl, and a second person, masculine in appearance, who walks vigorously behind her, holding her outstretched hand. The subject is lightly etched, with a mesh of cross-hatching in most of the areas that are in shadow.

The masonry has been further defined with etching, and much of the ground has been covered with horizontal strokes. The lamp in the long window at left radiates now from six circular globes.

The illuminated areas of the masonry have been dimmed by means of parallel horizontal hatching, while the ground surrounding the two figures has been darkened with loose horizontal lines.

The area below the lamp in the window has been burnished. According to Amor’s intaglio record books, drypoint has also been added to the plate, though it is not clear where. There are four variant impressions of this state, two dated 1990 and two dated 1995.

Catalogue Number
E.019
Title and Date
The city, 6 am

This etching belongs to a group of loosely related works depicting inner-city streets in which there are large, bare plane trees. Most of these views are nocturnal or set in the early morning, and their atmosphere is distinctly uneasy. The setting in E.019 is imagined, although the architecture is roughly based on that of Victoria’s Parliament House (built 1855–56), Melbourne.

Amor has said that the subject of this work occurred to him as the result of a vivid early-morning dream, and he has identified the two figures in the etching as a former girlfriend, Genny, and her young daughter. Genny was a long-legged gymnast, with hair cropped short, who often wore sports clothes; she is portrayed by the artist in a woodcut from 1984, titled Genny. However, despite Amor’s identification of the taller figure in E.019 as Genny, the figure has a decidedly masculine appearance, and this, given that the adult in the image looks to be tugging on the hand of the young girl, provides the scene with a sinister inflection. The atmosphere of disquiet in this print is heightened in an etched version of the subject that was made in 1990, but was begun slightly later than E.019: The city, 1990 (cat. no. E.023).