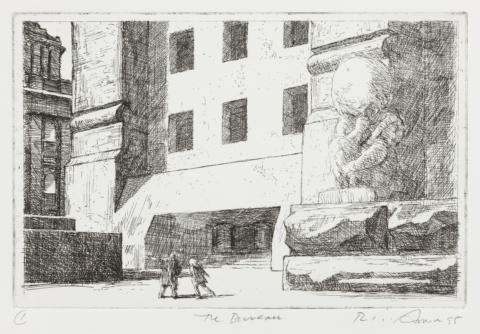 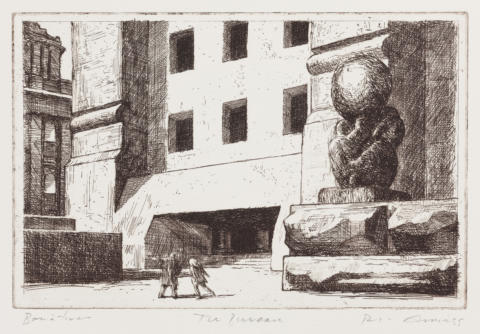 Etching. In an urban space, overlooked by tall nineteenth- and twentieth-century buildings, are two small figures: a man who points towards the left, as though giving directions, and a woman who approaches him from the right. At the far right of the composition, on a large, rusticated pedestal, is the lightly etched sculpture of a giant foetus, sucking its thumb. In the shadows of the understorey of the building at the centre of the image, there is a semi-circle of lightly etched cross-hatching.

This etching followed on from a commission for a watercolour from a Sydney gynaecologist, who had asked Amor to create a visual response to Aldous Huxley’s futuristic novel Brave New World (1932). The novel describes a world in which natural reproduction is abolished and children are created in Hatcheries and raised in Conditioning Centres according to their predetermined positions in society. Foetuses can be chemically interfered with, so that beings designed to fulfil the particular needs of society can be created.

All the essential details of the subject of the etching are present from the first state, with its vast, empty space and small, furtive figures, its threatening architecture, and its giant sculpture of a foetus. What remained to Amor to do was to achieve an appropriate calibration of mood through greater tonal definition. He did this not only by making changes to the matrix, but also by experimenting with inking and wiping. The most significant change made to the plate through its three states was the establishment of tonal balance between the two halves of the composition. In the early states, the left half of the image was darker than the right, and the sculpture of the foetus appeared light and almost ethereal. Amor’s experimentation with dark ink tone led him eventually to undertake considerable re-etching in the final state: the sculpture was rendered more monumental, dominating and sinister, and the entire atmosphere more oppressive.