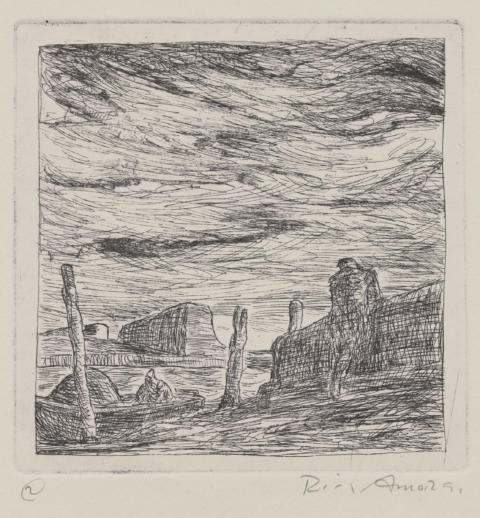 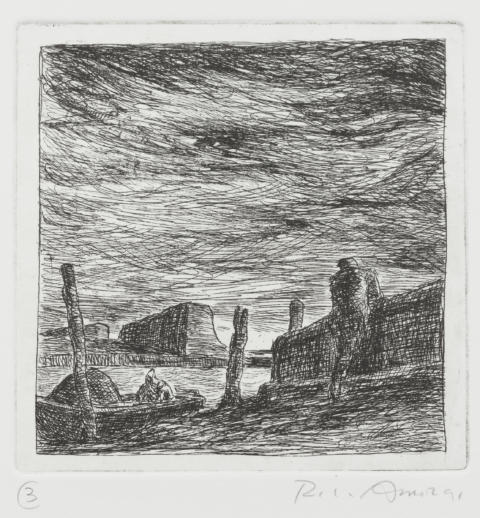 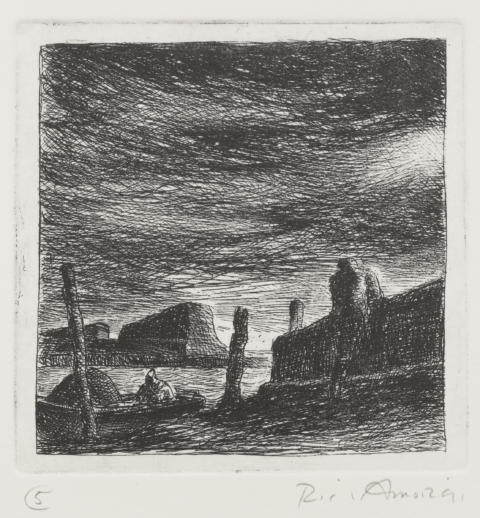 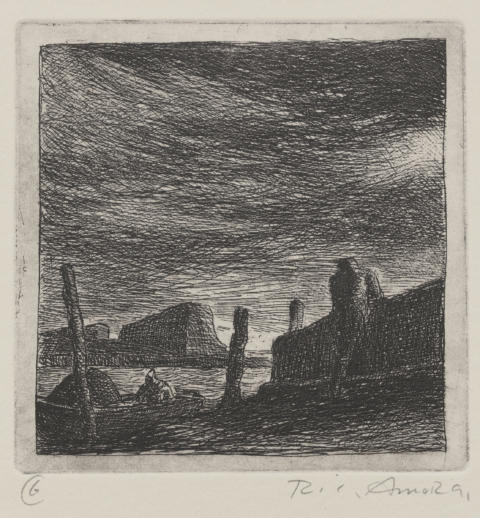 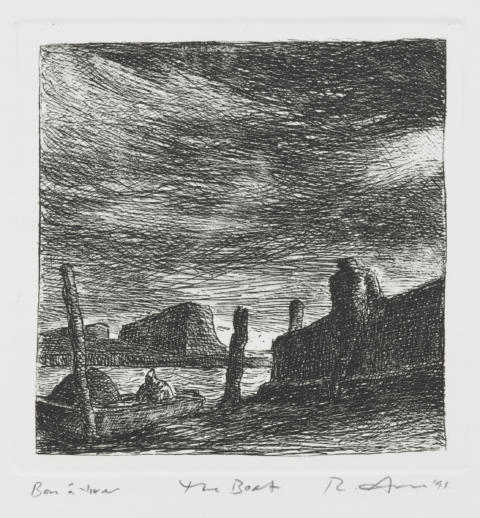 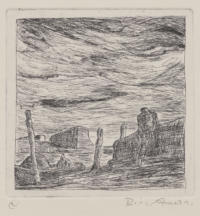 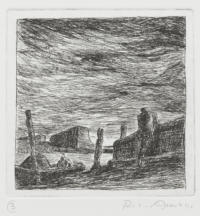 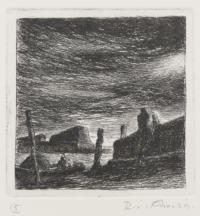 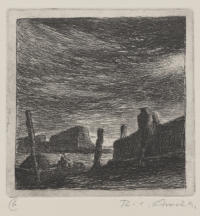 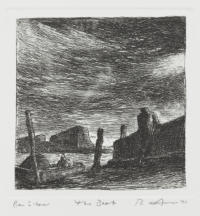 Foul biting has appeared in the sky and has been incorporated into the clouds.

The upper area of the sky has been cross-hatched and is now darker. The shadowed areas have been strengthened.

An area of light has been burnished into the sky at the right edge, and highlights have also been burnished around the right shoulder of the standing figure so as to make it stand out more clearly.

The right half of the sky has been burnished. There are two variant impressions of this state.

Catalogue Number
E.056
Title and Date
The boat 1991
Description of Featured Image
View of a river at its entrance to the sea, with banks on either side. In the foreground at right is a sea wall with a man leaning against it; to his left are three mooring poles. At the lower left, in the river, is a canopied boat with a hooded boatman. On the far shore are two large breakwaters. The sky is clouded over, but is clear at the horizon, of which there is a glimpse in the middle distance.
Where Made
Dunmoochin, Cottles Bridge. The Baldessin Press, St Andrews
Medium Category and Technique
Intaglio Print: Etching and burnishing on copper
Support
Wove paper. Identified papers: BFK Rives paper with watermark: ‘BFK RIVES / FRANCE’ with infinity symbol.
Dimensions
Image size: 148 x 148 mm
Matrix size: 148 x 150 mm
Artist’s Record Number
RAE.151 (1991, 2002)
Printer(s) and Workshop(s)
All state impressions printed by Rick Amor in his Dunmoochin studio, Cottles Bridge. Edition printed by Doug Hails at the Baldessin Press, St Andrews.
Summary Edition Information
Six states. Edition of ten numbered impressions, 2002; edition impressions dated 1991 (this being the year in which all states were completed).
Literature
For an illustration of the painting The boat, 1992, see Gavin Fry, Rick Amor, Beagle Press, Roseville, NSW, 2008, p. 43.
Collections
State Library of Victoria, Melbourne: six state impressions, numbered 1 through 6, all dated 1991; bon à tirer impression (2002, dated 1991); ed. 4/10 (2002, dated 1991).
National Gallery of Australia, Canberra: ed. 3/10 (2002, dated 1991) (2007.707).
Comment

This etching depicts the mouth of Kananook Creek, just out of sight of Port Phillip Bay at Frankston. E.056 is one of several closely related works, based on memories of his youth, that Amor painted, etched and cut in wood during the 1990s. All of these representations are suffused with a mythical quality, whereby the little Kananook Creek expands in narrative significance, taking on the mantle of the River Styx. Like its closest predecessor among the etchings, Out to sea, 1991 (cat. no. E.036), this work includes a canopied boat in which there is a hooded boatman, although here the boat is returning from the sea, not setting out. The solitary observer who leans against the wall at right does not appear in the earlier etching, but occurs again in the painting titled The boat, made in 1992 (Fry 2008).

In developing the image in E.056, Amor established the essential details of the composition in the first state, and then continued to work on the plate tonally. When inadvertent foul biting appeared in the second state, he managed to utilize it by incorporating it into the darkening sky. Through the following four states, he proceeded to regulate the tonal aspects of the print, using both the etching needle and the burnisher.

Although he finished etching the plate in 1991, he did not edition it then. Instead, he set it aside for a decade, until 2002, when he asked Doug Hails to print an edition. Amor retained 1991 as the primary year of creation, however, and inscribed that date on all edition impressions.