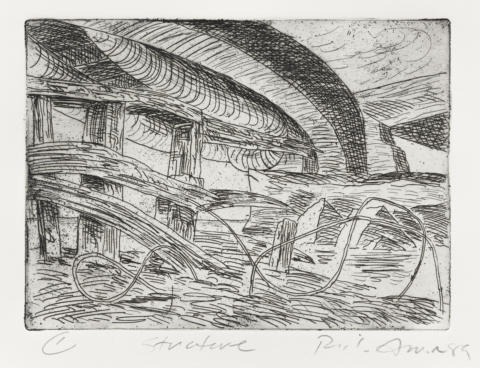 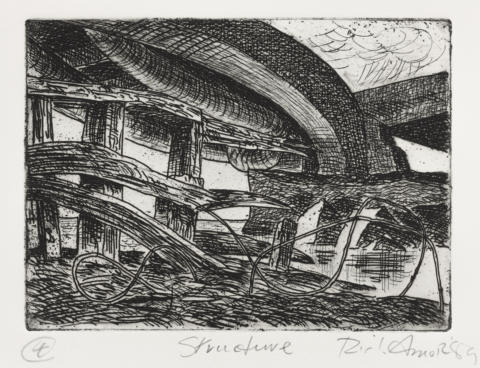 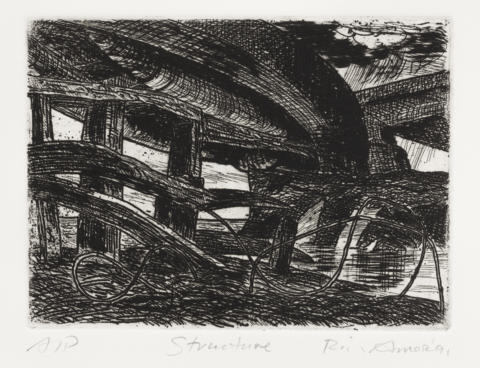 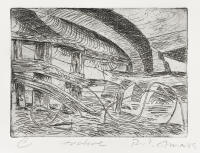 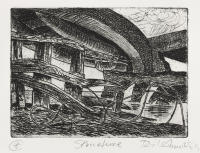 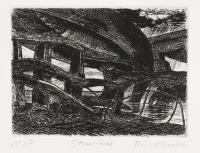 Etching. A depiction of a segment of the underside of a curving bridge, which runs from upper left to centre right and spans a narrow stretch of water. At the left are the remains of a derelict pier, and in the foreground are twisted cables. The plate is pitted with spots of foul biting.

More drypoint has been added throughout the plate, creating a very dark image. The sky in the upper right corner now has patches of deep black. Drypoint shading has been added to the vertical face of the upper curve of the bridge and has been employed to articulate the edges of the structure on the far bank.

This etching was inspired loosely by one of Amor’s paintings of the West Gate Bridge disaster, Broken pier, Westgate, 1986 (Short 2008). On 15 October 1970, two years into the construction of Melbourne’s West Gate Bridge, one of its spans collapsed, killing thirty-five workers.

The tangle of cables in the foreground of the etching is close to what is depicted in the oil painting; however, the bleakness of the painting has given way here to a largely imagined composition that is dense and filled with dark, coiled emotion. The condensed view of the subject, with its snaking curve, makes it ambiguous and difficult to read. Presenting the scene in this way was a deliberate strategy on the artist’s part and one that contributes to the sense of turmoil in the etching, despite its small scale. The six states of E.010 proceed incrementally from light to dark, with an ever-increasing sense of physical presence and threat.