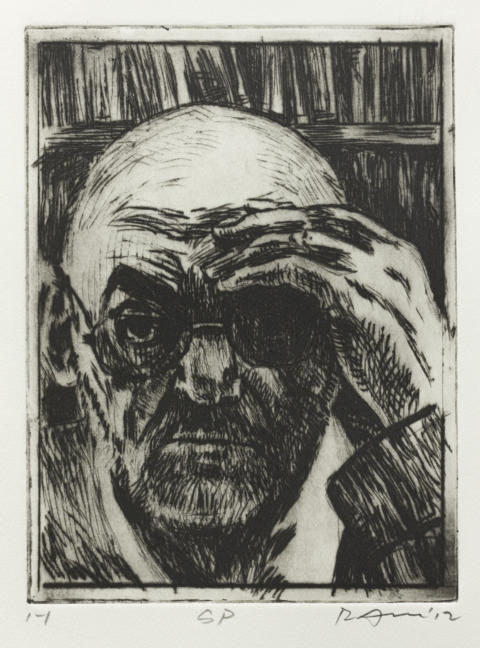 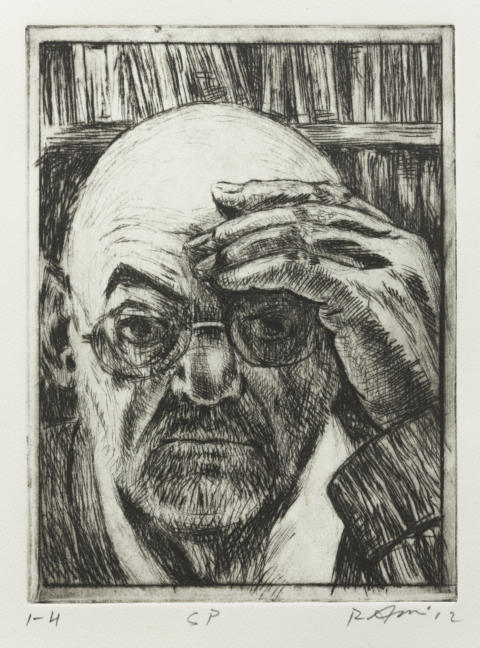 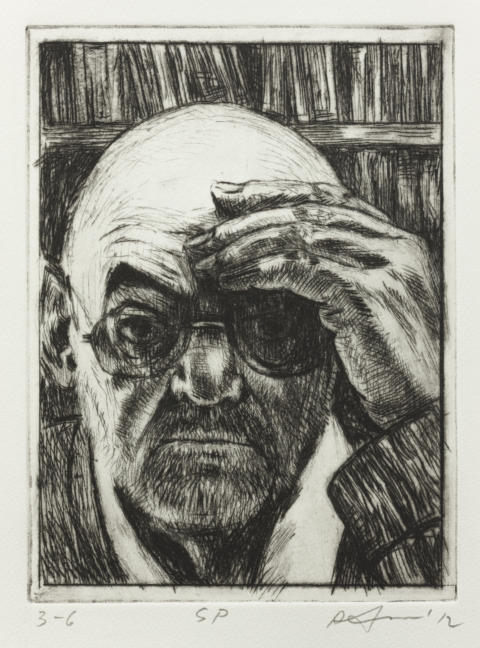 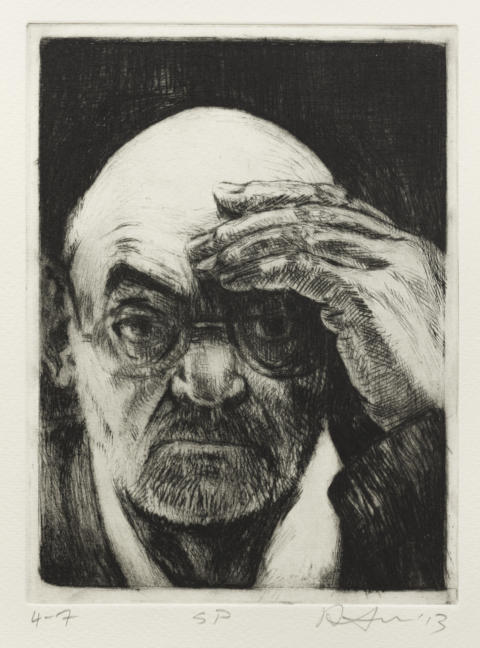 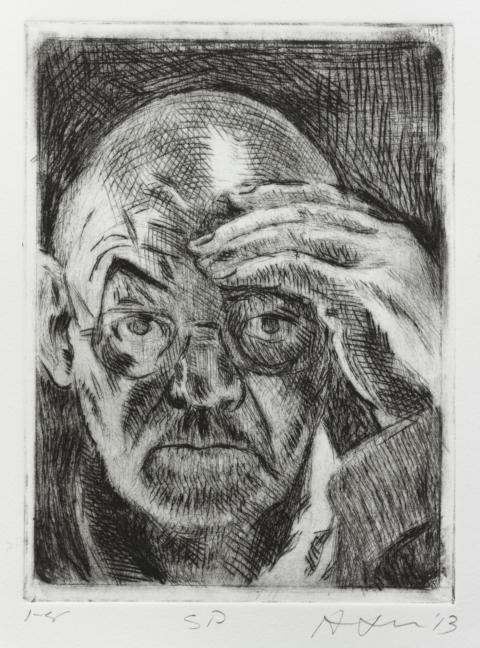 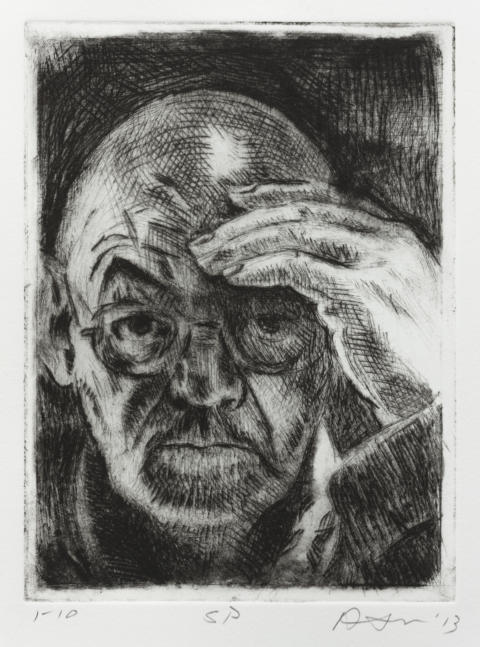 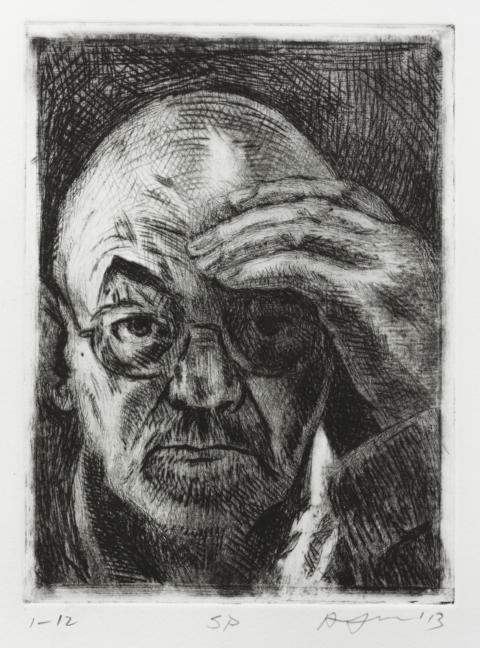 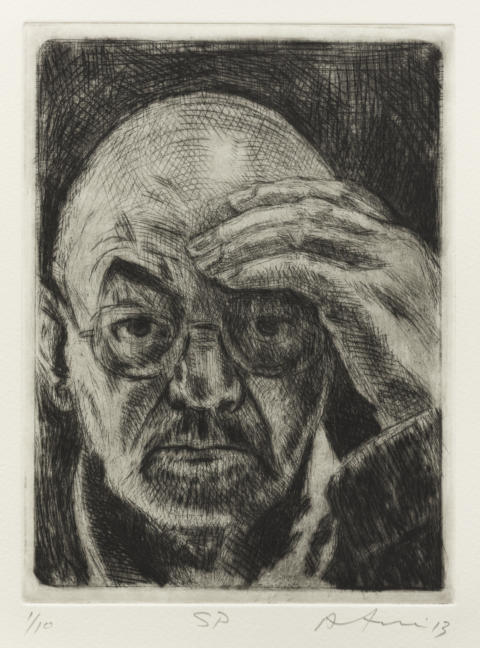 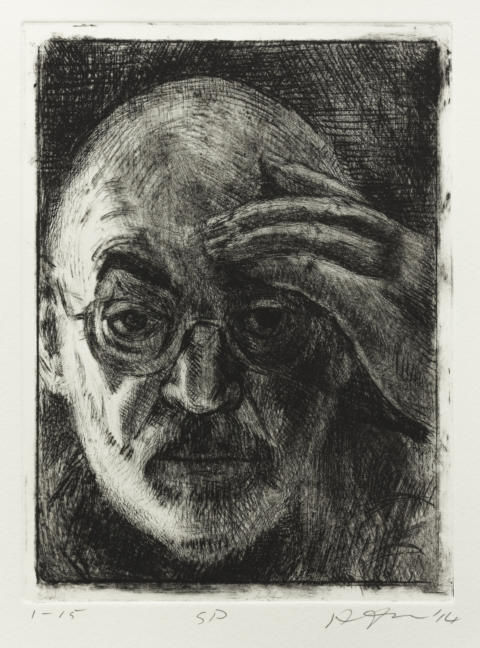 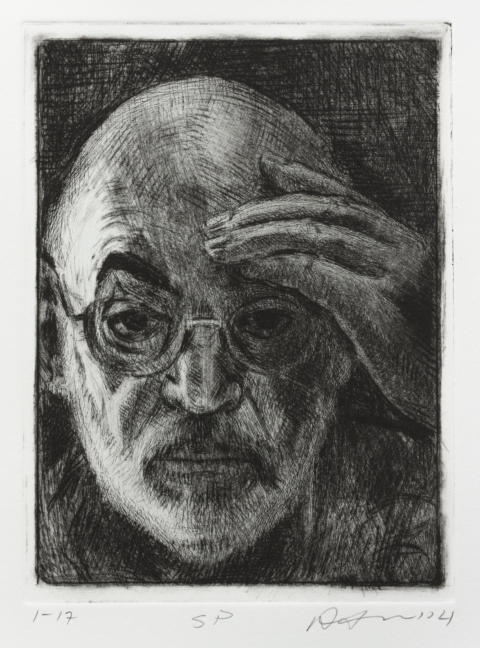 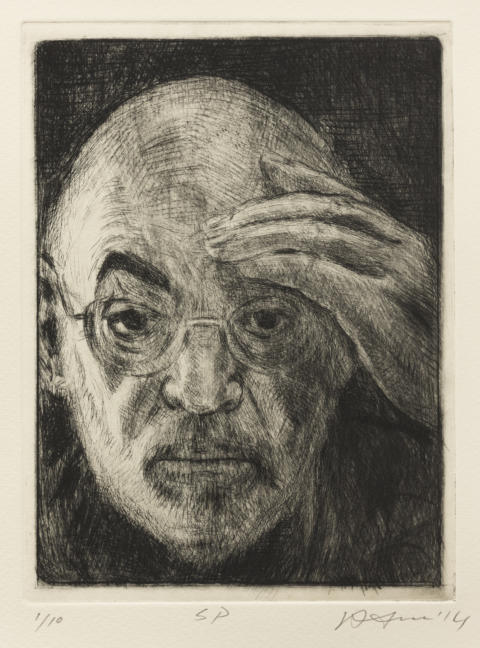 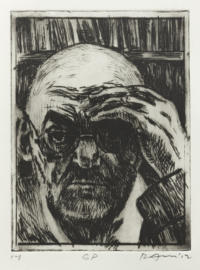 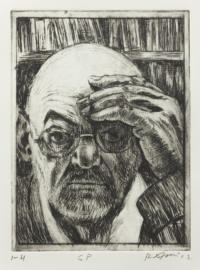 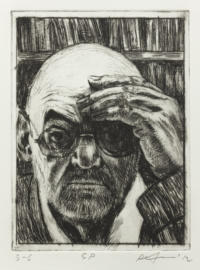 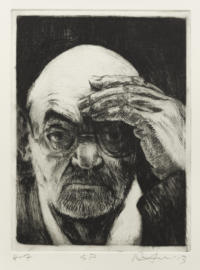 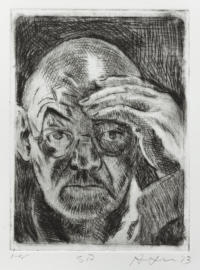 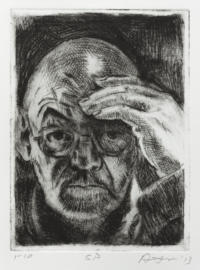 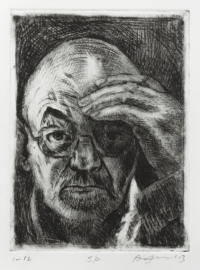 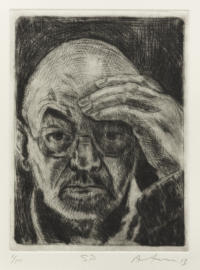 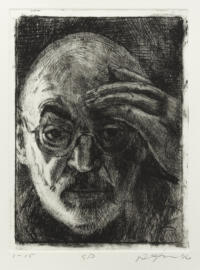 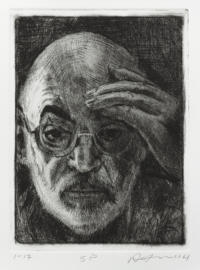 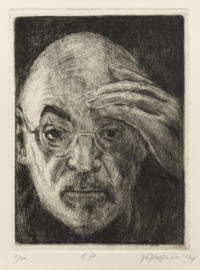 Drypoint. A head and shoulders self portrait, with beard and moustache. Amor wears spectacles, and his proper left hand is raised and touching his forehead. Behind him is a densely stocked bookshelf. A framing line runs around the perimeter, approximately 10 mm from the plate mark. The linear qualities of the drypoint are prominent.

The palm of the hand and the fingers have been redrawn and nails added. The modelling of the hand has been adjusted with the addition of more parallel hatching.

Several horizontal strokes have been added to the bookshelf at the far left and to the little finger. The inner left edge of the sweater has been strengthened. A row of oblique diagonal hatchings has been added to the left cheek. There are four variant impressions of this state.

Reworked 28 February 2013. Much of the existing burr has been burnished down and the books in the upper background have been overlaid densely with new drypoint. There are four variant impressions of this state.

Reworked 25 May 2013. Much of the plate has again been burnished and new drypoint work outlines the main features. The bald top of the head has now been modelled with a mesh of cross-hatching. The white collar at left has been darkened with oblique hatching.

Drypoint accents have been added to areas of the head and face. Oblique hatching has been added around the uppermost fingertip, to the inside of the left eyebrow, around the left eye, and to the left end of the moustache. There are two variant impressions of this stat

The left ear has been redefined and the contour of the left spectacle lens strengthened. There are three variant impressions of this state.

The inside of the right lens has been burnished.

More drypoint shading has been added to the fingers and around the knuckles. Burnishing has lightened the highlights at the outer corner of the left eye. There are two variant impressions of this state.

The bridge of the spectacles has been burnished. There are two variant impressions of this state.

This self portrait was begun in late 2012, soon after Amor returned to Melbourne from a visit to New York. While there, he had seen the Museum of Modern Art’s exhibition New to the Print Collection: Matisse to Bourgeois, which included Käthe Kollwitz’s self portrait etching Self portrait with hand at the brow, 1910.

Inspired by the Kollwitz rendering, Amor embarked on the present self portrait and worked on it through to 2014, keeping a record of the dates on which he initiated significant changes to the image. The self portrait is a pure drypoint; the only tools Amor used apart from the drypoint needle were a burnisher and a scraper (he used the latter to prepare the plate for its comprehensive reworking in 2014).

After producing the first four states of the print (2012), Amor took a break, returning to the plate on 28 February of the following year and reworking the image extensively, stripping it of anecdotal details. He removed the background of books (a detail based on the large bookshelf that lines an entire wall in Amor’s house) because it ‘seemed too obvious’, and replaced it with a dark, unspecific background (state V). On 25 May 2013, he reworked the plate again, and took it through another five states (states VI through X) before having the print editioned for the first time.

Other radical changes to the image were made after the first edition was published. Sometime after 28 April 2014, Amor returned to the plate; he altered the position of the hand and fingers and lengthened the head, making it occupy a greater amount of space and thus appear closer to the viewer. Finally, he shrouded the clothing in darkness. The focus was now entirely on the face and on the artist’s large left hand.

There are no preparatory studies for the various renderings of this work; as with other Amor self portrait etchings, this one was begun in front of a mirror and scored directly onto the copper plate.