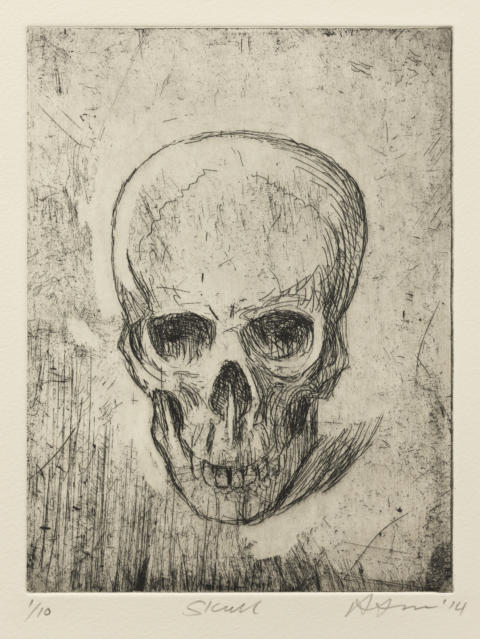 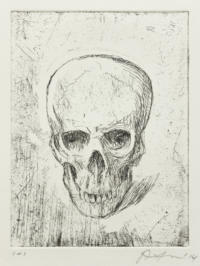 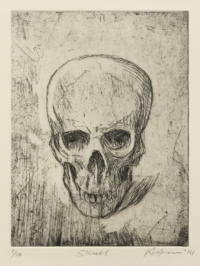 Etching. A human skull, depicted from the front and from a raised viewpoint, against an indeterminate background. The plate is marked with accidental scratches and with foul biting. At the lower right of the skull is a patch of oblique parallel hatching, indicating that the skull is sitting on a surface. There are two variant impressions of this the only state.

The skull depicted here is a standard prop (made of plastic) in Amor’s studio. It appears in a number of the artist’s works, including a watercolour made in 2010 (Niagara Galleries 2010). On the day he made the present etching, Amor picked up one of his store of prepared copper plates, whose ground was scratched and damaged, and decided on the spur of the moment that this was an appropriate background for the skull. The image was drawn directly onto the plate ‘in one hit’. The print was made in the first half of 2014, before Amor’s diagnosis with lung cancer, in June of that year.

Amor has said that he likes to draw the skull because it is an intricate object that is challenging to depict, adding, ‘I find skulls friendly’. As an exercise in the tonal rendering of a complex structure, drawing the skull also provides him with a firm grasp of the underlying structure of the human face – knowledge that is important for a portraitist.

The skull is the most ancient of memento mori, a symbol of the vanity of earthly things – which is a fundamental theme underlying Amor’s work.