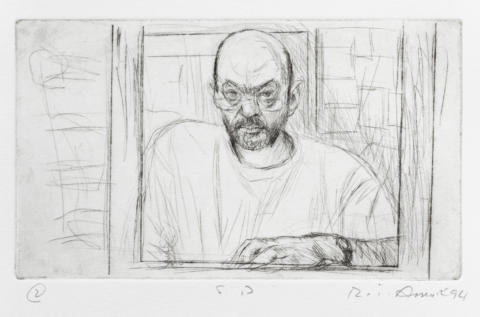 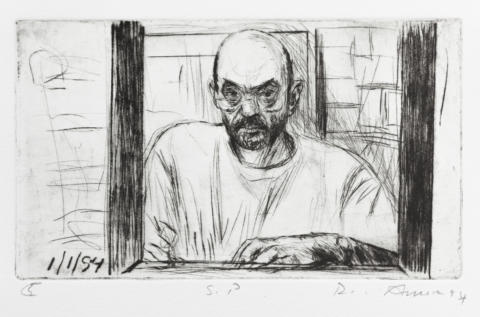 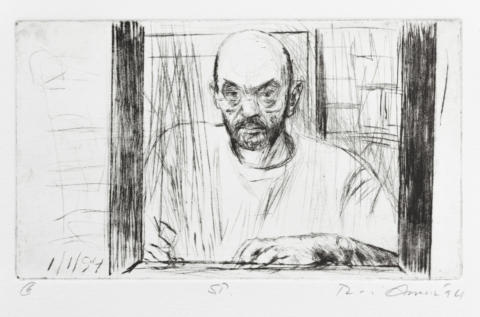 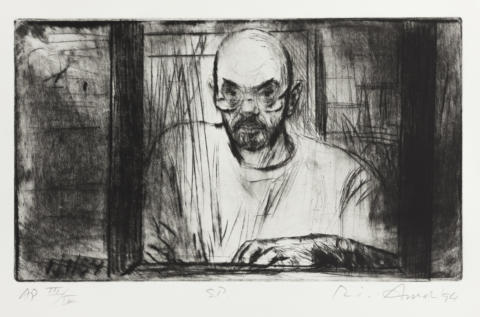 Drypoint. Amor depicts himself peering over his spectacles at his reflection in a framed mirror as he draws his self image, with a drypoint needle, directly onto a copper plate. The subject is delineated lightly in drypoint. There are three variant impressions of this state.

Long vertical strokes of drypoint have been added to Amor’s left and right, within the mirror frame.

Horizontal drypoint strokes have been added at the left; two of these lines run through the date at the lower left, as though cancelling it out. More drypoint has been added to the image within the mirror frame. There are six variant impressions of this state.

This work is, in part, an exercise – a deliberate homage to Henri Matisse in which Amor refers to Matisse’s earliest intaglio print, Self portrait of the artist etching (Duthuit 1), a drypoint made in around 1900. Matisse’s self portrait is, in turn, regarded as an homage to Rembrandt’s 1648 etched self portrait, Self portrait drawing at a window (Bartsch 22). Through his own act of homage, Amor was expressing his respect for the lessons and achievements of Matisse and the great masters of European art, while also placing himself decisively within their tradition.

In his intaglio record books, Amor recorded seven states of E.085, but a number of these are variant impressions and not true states. After the initial delineation of the subject in the first state, which was printed in three variant impressions, the artist continued to refine his image in the second state, also emphatically adding to the plate a precise date: 1 January 1994. Such dating is extremely rare in Amor’s prints, and here the date formally ushered in a new year, and with it the beginning of a new body of work.

The focus of the print was heightened in the third state, with lines of vertical drypoint scoring being added to Amor’s left and right; in the fourth state, tone was added with the roulette and the rocker, so as to better define the mirror’s frame, and thus to frame the subject more strongly.

No two impressions of this drypoint are alike, the printing being experimental throughout, as cleanly wiped impressions alternate with dark ones.

This is the last print that Amor made at Dunmoochin, Cottles Bridge, before moving to the Melbourne suburb of Alphington in April 1994.