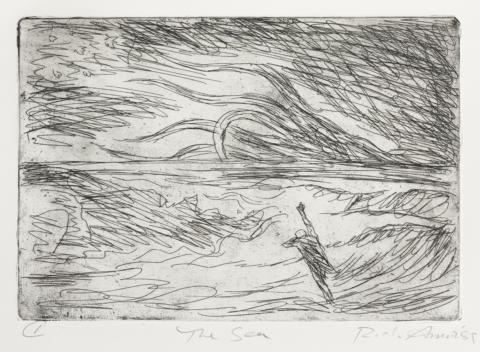 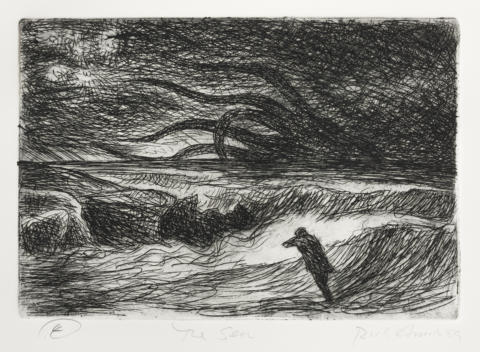 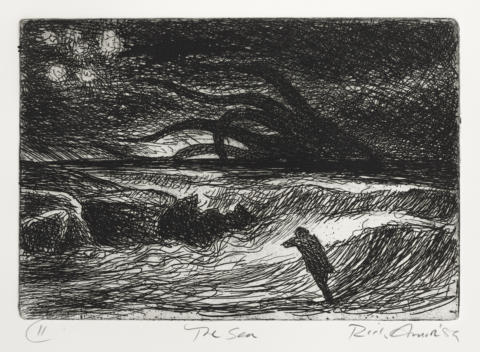 Etching. A nightmarish scene of a stormy sea with the waving tentacles of a gigantic squid emerging on the horizon. In the upper left corner of the sky, five stars are sketchily outlined. At the lower right is the lone figure of a man leaning into the wind, his right arm raised as though he is calling out to someone or something. The subject is loosely etched in outline.

The man’s raised right arm has been burnished away and a mesh of cross-hatching added to the sky. Lines of horizontal parallel shading have been added to the sea in the lower left corner. The waves above the rocky promontory are now shaded with parallel loops, and the water above the large foreground wave has also been darkened.

The plate has been re-etched, so that the lines are now thicker. A patch of oblique parallel hatching has been reintroduced just above the man’s head. There are nine variant impressions of this state; at least six are dated 1989 and at least one is dated 1990.

The emotional tenor of this image is immediately established in the first state, with its freely drawn lines that have been harnessed to outline – delicately and swiftly – the nightmarish subject matter. The source of the subject is not, in fact, oneiric but is in large part literary: Amor’s squid is Kraken, the mythical sea monster of Norse legend and the subject of a poem by Alfred, Lord Tennyson (1809–1892). This work, ‘The Kraken’ (1830), in turn inspired John Wyndham’s science fiction novel The Kraken Wakes (1953).

The primeval, apocalyptic atmosphere in the etching is very much in keeping with the Gothic sensibility of Tennyson’s poem:

Below the thunders of the upper deep;
Far, far beneath in the abysmal sea,
His ancient, dreamless, uninvaded sleep
The Kraken sleepeth: faintest sunlights flee
About his shadowy sides: above him swell
Huge sponges of millennial growth and height;
And far away into the sickly light,
From many a wondrous grot and secret cell
Unnumbered and enormous Polypi
Winnow with giant arms the slumbering green.
There hath he lain for ages and will lie
Battening upon huge seaworms in his sleep,
Until the latter fire shall heat the deep;
Then once by man and angels to be seen,
In roaring he shall rise and on the surface die.

Sarah Engledow has related that Amor presented an impression of this etching to the writer Dorothy Porter (1954–2008), whose portrait he had painted, after he had read her poem ‘Giant Squid’ (2002) (Engledow 2011). The poem’s opening verse is: ‘I dreamt last night / that I lay naked / at the bottom / of a soft black sea / in the many loving arms / of a giant squid’. The coincidence of both artist and writer having imagined a giant squid is striking, but there is a marked contrast between the two conceptions of the creature: the sensuous mood of the verse could not be more different from the threatening atmosphere in Amor’s etching.

In 1992, when asked by Gary Catalano whether the giant squid had any sexual connotations, Amor denied this possibility, saying:

Our house at Frankston backed onto the beach. I was always seeing things thrown up on the shore – there’d be a dolphin, or a shark, or an octopus after rough weather. When I was a kid I always wanted to see something like that rising out of the sea … some monstrosity.
I think, too, seeing that Walt Disney film, 20,000 Leagues Under the Sea. I was mad about that film when I was about eight or nine, absolutely entranced. I think the squid in that had a profound effect on me. (Quoted in Catalano 1992, p. 5)

Amor did, however, tell Catalano that he identified the creature as a symbol of ‘submerged terrors’, a response consistent with David Hansen’s observation that the monstrous creature from the sea ‘evokes primal connections: to our evolutionary origins, to our submerged psyches’ (Hansen 1990).

The five states of the etching document a progressive darkening of the image – in both metaphoric and real terms – and, in the final state, Amor proceeded to experiment with different wipings of the plate. (Subsequently, he produced two hand-coloured impressions, within the edition of ten.) The most significant change to the image occurred in the fourth state, when the man’s right arm, which had formerly been raised in alarm, was burnished away. It is as though the drama had developed in time, through the states, from the moment of the man’s initial expression of fearful surprise to the point at which he is wholly at the mercy of the elements.

The sea, a woodcut also made in 1989, reprises the composition of E.012, but with a crucial difference: it depicts a Munch-like figure passively watching the elemental scene, not a figure reacting to it, as in the etching (Hansen 1990). Twilight foreshore, an oil painted in 1997, echoes the Kraken theme but depicts two giant squid at close quarters with a man escaping their writhing tentacles (Niagara Galleries 1998). A painting of this subject hangs on a wall in the painting Sleeping woman, 1992–93 (Catalano 2001).