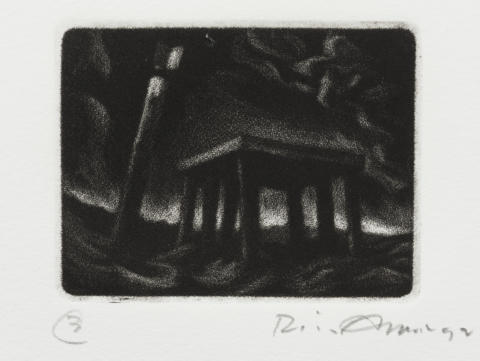 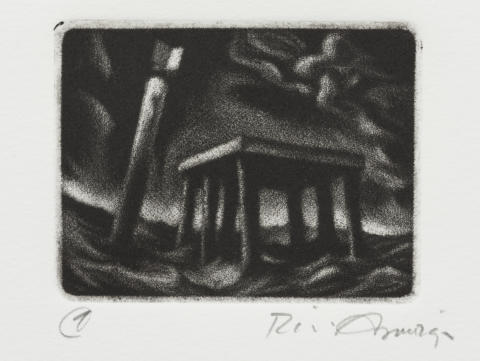 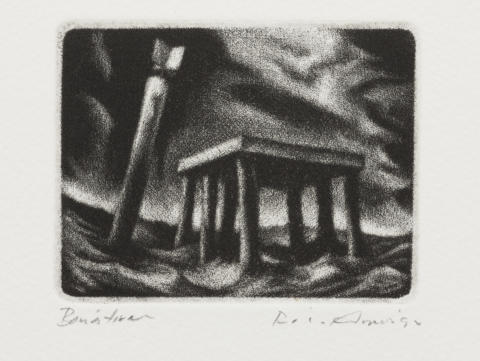 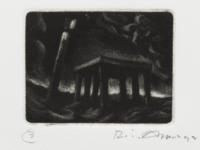 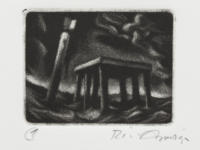 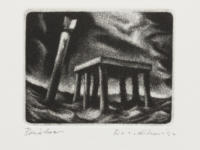 The highlights have been lightened, and clouds are now visible at the left as well as the right. The sea is now clearly turbulent.

The sea and sky are now uniformly light, and the subject emerges clearly through the darkness.

The clouds at the upper right have been burnished yet again and are now considerably lighter.

The composition of this mezzotint brings together two separate structures that Amor sketched during the boat trip he took on 20 February 1992, with three of his artist friends, to the mouth of the Yarra River: a tall navigational marker and a wooden platform. Here the two motifs have been placed side by side, and transposed from their river setting to a stormy sea.

It is an inherent aspect of the mezzotint process that the subject is brought into being progressively, as light tones are obtained through incremental burnishing. The steps taken in the creation of a new state may appear to be very slight, and it can therefore be difficult to be certain when a change has been made to the plate and a new state produced. Such is the case here. Nevertheless, we are guided by the fact that Amor himself says that he takes a proof of a mezzotint only when necessary, that is, only when he has made a change to the plate. Hence, when state proofs of mezzotints have been recorded in his intaglio record books, it is reasonable to assume that each one represents a change having been made to the matrix.

Contrary to expectations, Amor finds that mezzotints require more pressure when printing than do other intaglio prints. His records indicate that he had planned to print an edition of ten impressions of E.069, but, having proofed it so many times, he decided not to return to it.