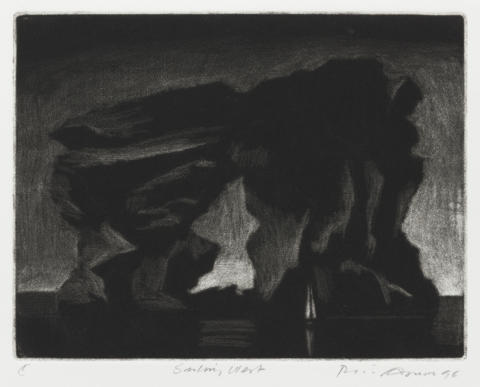 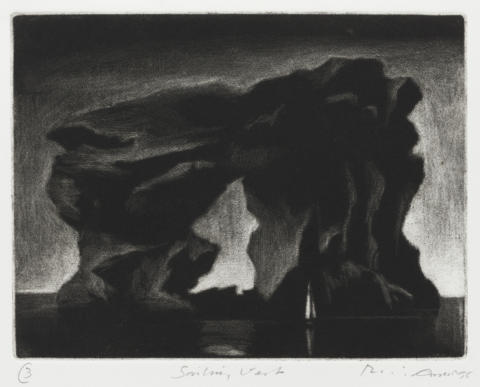 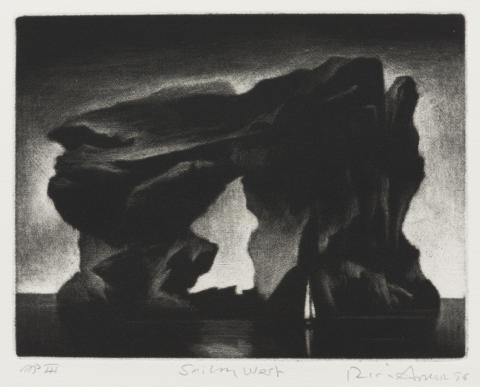 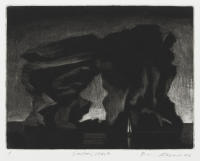 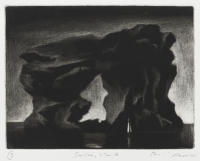 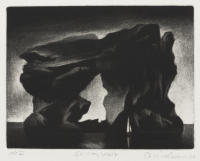 Mezzotint. A large, jagged rocky outcrop rises from the sea. At the centre of the rock formation is an irregular opening, but it is not clear whether this is a natural arch through which the distant horizon can be seen, or a hole in the rock. In front of the rock, at the right, is a small yacht, its sails resting. The composition is summarily burnished but is essentially complete.

The rocky arch has been further modelled through burnishing, with irregular outcrops added at the upper right. The sky has been burnished back and the reflection seen through the arch’s opening is lightened by an oval patch of light.

The burnishing of the plate has been evened out, and has been extended in the light areas, especially at the left. The light areas of the sky have no angular transitions and are now tonally seamless.

The huge rocky arch depicted here is based on a natural rock formation at the ocean beach at Sorrento, Victoria. The immediate source for this mezzotint, however, is the painting Sailing to the west, 1996 (Niagara Galleries 1996), in which the rock formation as it is in reality has been dramatically transformed and has become something much grander.

Similarly in E.103, the rock, reversed in orientation, is made to appear more monumental and more bizarre than the source motif – and thus takes on a mythic quality. While the progression of states seemingly edges the image towards greater realism, the rock retains its surreal, dreamlike character to the end.

Amor has related this image to his early reading of the classics, in particular the story of Jason and the Argonauts and their quest for the Golden Fleece, a narrative that captured his imagination as a child. Robert Lindsay singles out Arnold Böcklin’s paintings of the ‘Isle of the Dead’ (Basel and elsewhere) and Goya’s Fantastic vision (Prado) as further iconographic references for Amor’s image (Lindsay 2005).

The six states of the mezzotint document incremental burnishing towards the completed image. In the first state, the burnishing marks are clearly evident, but they lose their angularity progressively, until the transitions from dark to light become imperceptible.

A charcoal drawing, Study for ‘Sailing to the west’, dated 5 February 1996 (McClelland Sculpture Park + Gallery, Langwarrin, Victoria), was made after the print (not before it, as the drawing depicts the subject in the same direction as in the mezzotint and also seems to emulate the particular tonal qualities inherent to the print). The motif of the rocky outcrop rising from the sea can also be seen in the plein-air watercolour Rock, Back Beach, Sorrento, 1998 (Castlemaine Art Museum, inv. no. 1567).