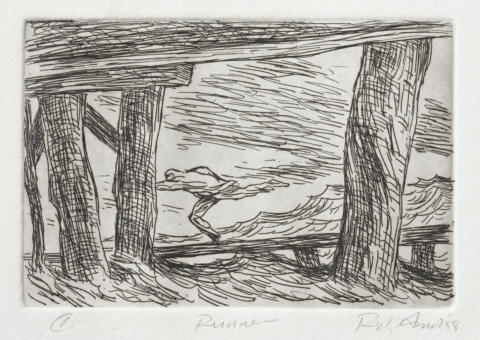 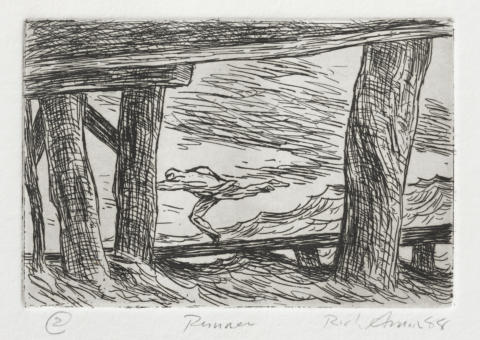 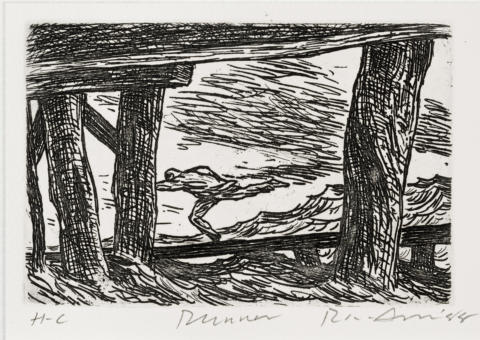 Etching. A man is depicted running leftward, along a low-lying pier, surrounded by stormy seas. Above the figure, supported by three substantial posts and by smaller beams, is another, massive wooden pier-like structure.

More loose hatching has been added to the topmost area of the large pier structure, to the horizontal beam below it, to the large column at right, and in the lower right corner.

The plate has been re-etched and all the lines are now thicker. Further etched accents have been added to the waves along the lowest strip of sea, including at the far right.

The running man is one of the signature motifs in Amor’s art and appears in his works across all media, its first occurrence being in a gouache from 1982, Cain fleeing. The present etching follows the composition of an oil, Runner, 1988 (Lindsay 2005), but is in reverse orientation. The oil painting, in turn, is a version of a 1984 woodcut with the same title (Catalano 2001).

E.004 was made for the Stephen Murray-Smith Portfolio, which was produced, in an edition of seventy-five, to ‘commemorate the name and work of Stephen Murray-Smith’, who had died on 31 July 1988. Stephen Murray-Smith (born 1922) was a man of letters – a writer, an editor and a university teacher – who had edited the journal Overland for thirty-five years. Ten artists produced an etching each for the portfolio; in addition to Amor, they were: Charles Blackman, Arthur Boyd, Michael Leunig, Jiri Tibor Novak, Stieg Persson, Clifton Pugh, David Rankin, Jan Senbergs and Andrew Southall.

In E.004, the sea – a fundamentally important theme in Amor’s art − appears for the first time in one of the artist’s intaglio prints. The setting alludes to his memories of the bayside suburb of Frankston, where he lived as a child, and, in a more general sense, is an expression of elemental emotional turbulence. The subject was also an appropriate one in the context of the Murray-Smith portfolio because, like Amor, Stephen Murray-Smith had close connections to the sea: he lived in Mount Eliza, not far from Frankston, and holidayed regularly on the remote Erith Island, in Bass Strait.

The delineation of the subject of the etching is loose and free, appearing to be unconstrained by the act of being drawn through an etching ground onto the copper plate. However, the etched line does not convey tonal inflection, a deficiency Amor is aware of. This is the first etching he had made since his art school days, twenty years earlier, and he has admitted: ‘I wasn’t used to the bite and the acid and that sort of thing … I was probably still thinking in terms of strong tonal contrasts – which is fine in etching, too, but it’s what you naturally think about in woodcut. It lacks the fine grey and the subtle transition of an etching which hopefully come a bit later’ (quoted in Catalano 1993).

Nonetheless, this work heralds a stylistic and emotional leap in Amor’s intaglio prints, a transformation that had emerged earlier in his woodcuts.

In his intaglio record books, Amor notes that he made four state proofs, numbered 1 through 4, of this etching; only the first two of these numbered impressions have survived. However, the fact that few major state changes were made leading up to the third and final state suggests that the two missing proofs may have been variant impressions, not true states.

The image of a running man on a pier was repeated in a drypoint that Amor began in 1989 and worked on into 1992 (cat. no. E.013). In 1990, a variation of the running man theme was the subject of a mural-sized charcoal drawing commissioned as part of an installation for the Australian Centre for Contemporary Art (ACCA) by its then director, Grazia Gunn, for an exhibition series titled The ACCA Wallpapers. A lithograph on the theme followed much later, in 2006.