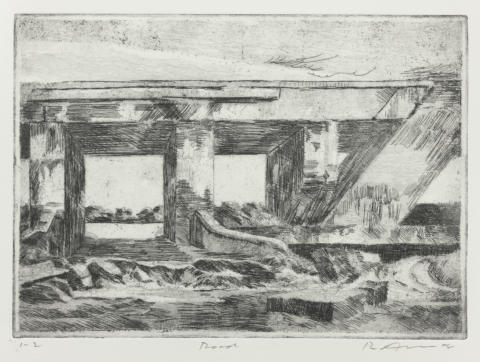 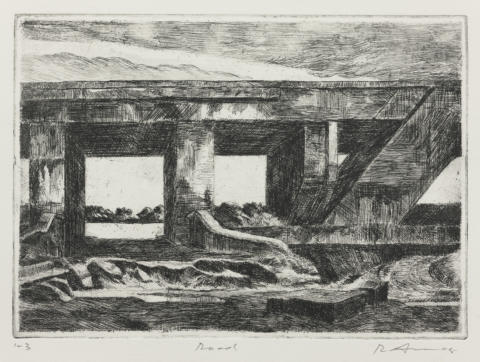 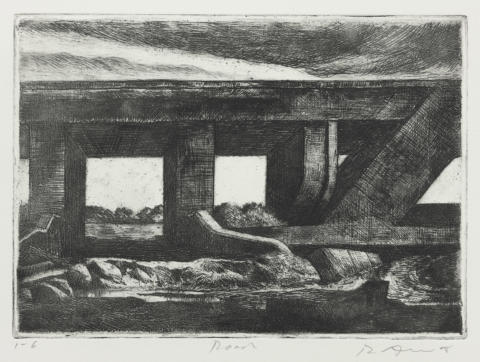 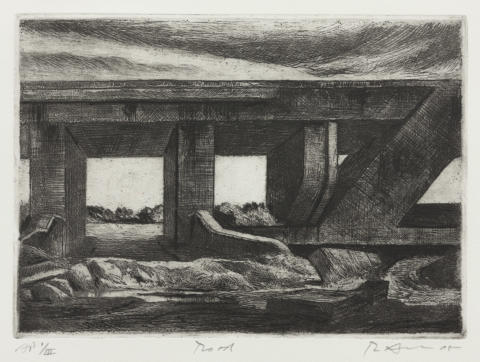 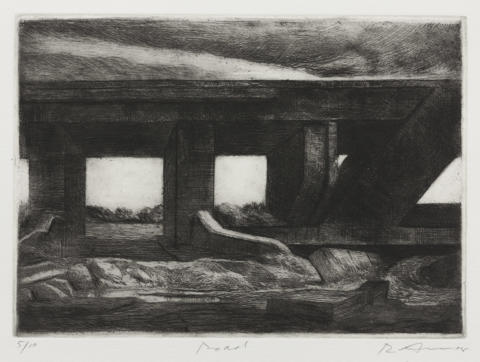 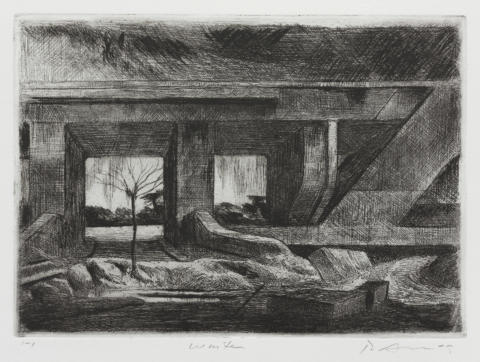 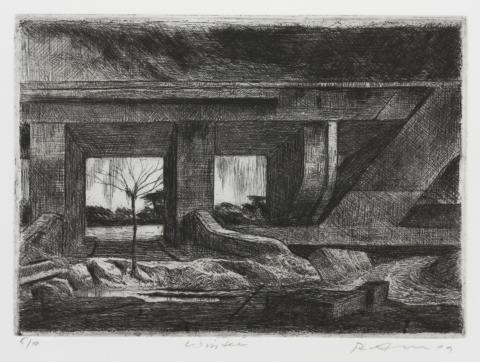 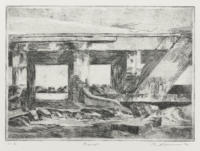 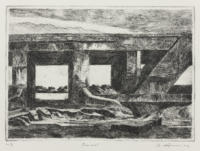 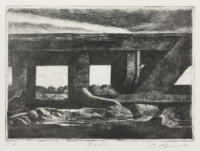 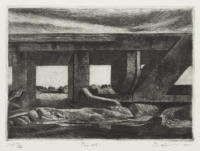 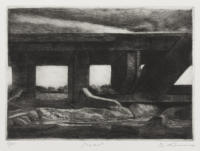 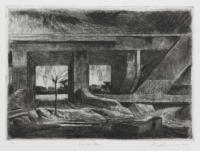 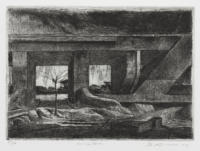 The plate has been etched with hatching and cross-hatching to better define the subject. This layer of etching stands out black against the faint grey of the first state.

More etching has been added throughout the plate, including to the clouds in the sky. Little of the initial faint grey image remains visible. There are two variant impressions of this state.

A regular mesh of hatching and cross-hatching has been added throughout the foreground. The upper clouds are now more clearly defined, darker and more threatening. The plate has again been re-etched and the contrast between the light and the dark areas is now more emphatic.

Drypoint has been added to many of the contours of the roadway structure and to the foreground. There are three variant impressions of this state.

The plate was substantially reworked in 2009 and the title was changed to Winter. Much of the foreground has been burnished and only the two largest openings beneath the roadway have views onto the landscape beyond. A leafless sapling tree has been inserted at the left. Drypoint has been added to the sky, to the roadway structure, and to places in the foreground. An irregular veil of etched vertical lines, indicating rain, may be seen beneath the roadway.

Drypoint accents have been added to the upper right of the roadway and to the sky.

This etching is loosely based on a painting by Nicolas Poussin (1594–1665), Winter, or The flood, 1660–64 (Louvre, Paris) (Rosenberg & Christiansen 2008), and the print, in turn, became the model for Amor’s oil painting Winter, 2008 (Niagara Galleries 2009). Amor’s reference to Poussin is subtle, and more obvious in the painting than in the print: there are allusions to pictorial structure, atmospheric effects, and mood, rather than to specific details, and, unlike Poussin’s orchestrated wilderness, Amor’s setting is urban. The roadway in E.155 is not based on a particular construction, however, but is invented, and reinterpreted in the spirit of the compositional cadences found in Poussin’s painting.

Amor’s longstanding interest in the paintings of Poussin was rekindled with the publication of Poussin and Nature: Arcadian Visions (Metropolitan Museum of Art, New York, 2008), an exhibition catalogue by Pierre Rosenberg, Keith Christiansen and others. In 2008 Amor made one other reinterpretation of a painting by Poussin. Summer, 2008 (Niagara Galleries 2009), is based on Poussin’s painting of the same title, which, like his Winter, is one of the works in the late series The Four Seasons.

E.155 was editioned for the first time in November 2008, after the completion of the eighth state, and was the last intaglio print that Amor made in that year. When he resumed work on it, in 2009, he reworked the plate so as to give the image a distinctly wintry appearance, and altered the title of the etching from Road to Winter. The plate underwent two state changes in 2009 before the second edition was printed.