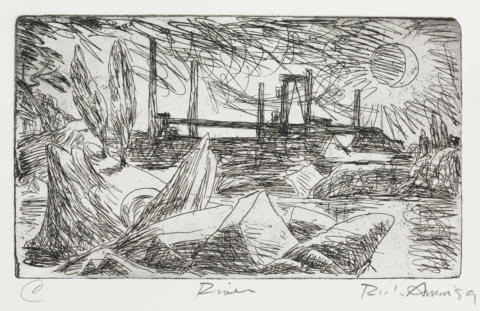 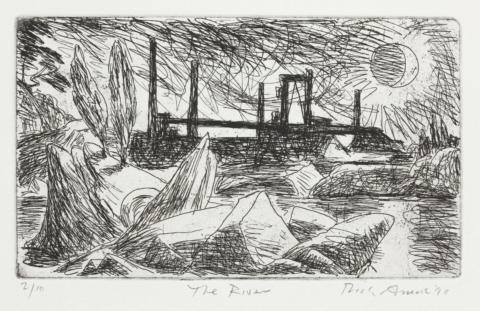 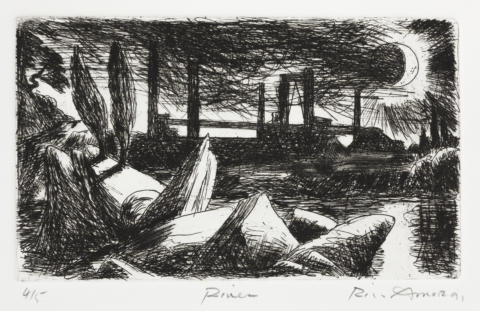 Etching. A view across a river, looking towards an industrial site with factory buildings and tall chimneys. At the lower left and lower centre is a breakwater of jagged boulders and blocks, and there are trees at the upper left. There is a crescent moon at the upper right. The etching is freely drawn, in a light, linear manner.

Roulette has been added to the rock in front of the tallest one and to a strip below the factory at centre right. There appear to be two variant impressions of this state.

Description of Featured Image
A view across a river, looking towards an industrial site with buildings and tall chimneys. At the lower left is a breakwater of boulders and blocks; beyond this, at the upper left, are trees. There is a crescent moon in the night sky, at the upper right. Although inscribed as an edition impression, this is actually an impression of the sixth and final state of this print.
Where Made
Dunmoochin, Cottles Bridge
Medium Category and Technique
Intaglio Print: Etching, open-bite etching, drypoint and roulette on copper
Support
Wove paper. Identified papers: BFK Rives paper with watermark: ‘BFK RIVES / FRANCE’ with infinity symbol.
Dimensions
Image size: 132 x 223 mm
Matrix size: 134 x 226 mm
Artist’s Record Number
RAE.7 (1989, 1991)
Printer(s) and Workshop(s)
All impressions printed by Rick Amor in his Dunmoochin studio, Cottles Bridge.
Summary Edition Information
Six states. Nominal edition of ten, 1990, but, according to Amor’s intaglio record books, only two impressions were printed and numbered. What appears to be a second edition, of five numbered impressions, is not: each impression, possibly bar one, is actually a separate state.
Exhibitions
Niagara Galleries 1990: Niagara Galleries, Richmond (Melbourne), Rick Amor, opened 19 June 1990 [closing date not recorded], no. 18, as The river, 1990, ed. 1/10.
Collections
State Library of Victoria, Melbourne: one state impression, numbered 1, dated 1989; ed. 2/10, dated 1990; three state impressions, numbered 1/5, 4/5 and 5/5, all dated 1991.
National Gallery of Australia, Canberra: one state impression, with plate tone, numbered 2/5, dated 1991 (2007.667).
Comment

This landscape is an imaginative merging of two locations. The background is based loosely on the area around Dight’s Falls on the River Yarra, in the inner Melbourne suburb of Richmond, with its industrial buildings; the rocky breakwater at the lower left is a reference to the river downstream, around Newport and Yarraville.

With a crescent moon present in the first state, it is clear that this was always meant to be a nocturnal landscape. The expressive linearity of the initial state conveys an incipient drama, an aspect of the work that would be developed tonally through the succeeding five states, ending in a final state whose stark light–dark contrasts amplify the shadowy intensity of the composition.

E.011 is an early example of the instinctively experimental approach that Rick Amor has to etching, and also speaks of his attraction to dark tone. Having completed the first two states, in 1989, Amor thought he would print an edition, but, after printing two impressions, in 1990, he decided to stop. He returned to the plate in 1991, and in a burst of activity reworked it, printing five impressions and inscribing them as though they were part of an edition. In reality, however, each of these impressions appears to be a new state, although the fifth impression is so dark that it is impossible to tell whether it constitutes an independent state.