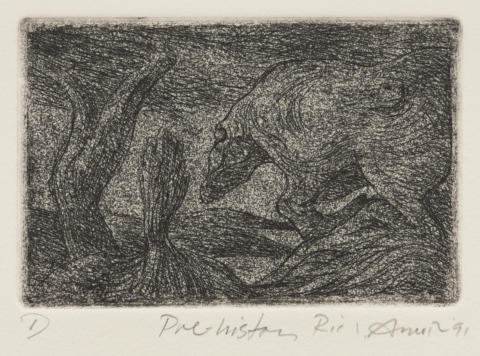 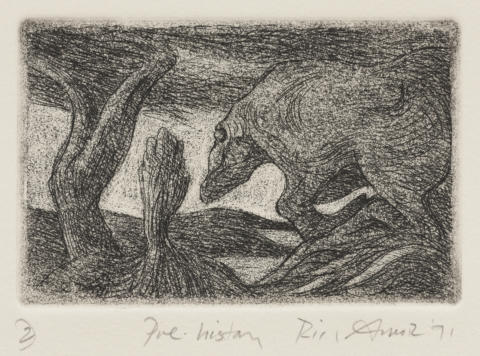 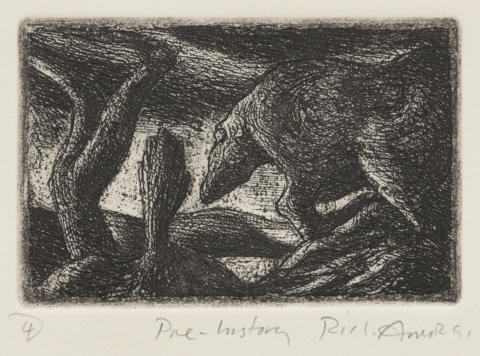 Etching over sandpaper ground. A landscape of bare hills, dominated in the left foreground by two strangely shaped pieces of vegetation. An imagined prehistoric creature lumbers in from the right. The composition is etched over a sandpaper ground, and the image is as yet indistinct.

The sandpaper ground has been selectively burnished, allowing the animal’s head and lower body, and the vegetation, to stand out more distinctly.

An irregular ribbon of light has been burnished into the sky. There are two variant impressions of this state.

The subject of this print is not a consciously created image, as its origins lie with an experiment in randomness. Here Amor was inspired by the Surrealist practice of dropping a piece of string loaded with paint onto a surface, and then giving the resulting haphazard marks a recognizable form – a process somewhat like that associated with the Rorschach inkblot test.

Amor’s experimentation saw the emergence in E.038 of a strange, unsettling image: a prehistoric scene populated with imagined plants and animals, summoned up from the artist’s personal ‘deep time’.

The etching combines two of the overarching themes in Amor’s art: the passing of time, and time’s corollary, history. The title of this print is one that Amor gave to at least four other works, the earliest being the painting Pre-history, 1987 (Heide Museum of Modern Art), which served as a model for a woodcut of 1990. In 1988 the artist made a woodcut titled Pre-history, using the same random method as he would subsequently employ in creating the present etching, and in 1989 he made a small bronze sculpture.

Amor used a sandpaper etching ground for the first time in this work. Sandpaper etching involves putting a sheet of sandpaper over a hard ground, running it through the press and allowing the sand particles to pierce the ground, thereby creating tone, somewhat like that in an aquatint. The subject of E.038 was initially etched over the finely pitted sandpaper ground; the image was then burnished into light, and clarified through the addition of line etching and more selective burnishing.