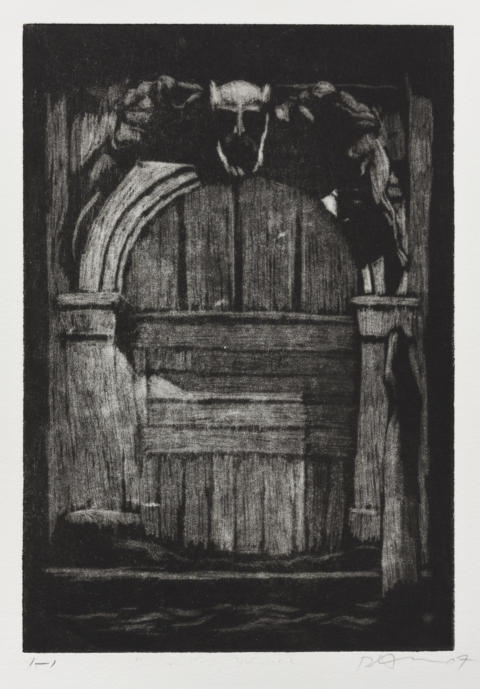 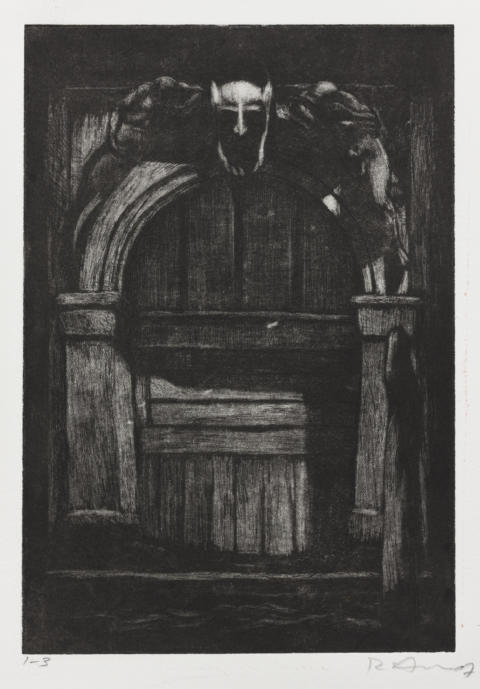 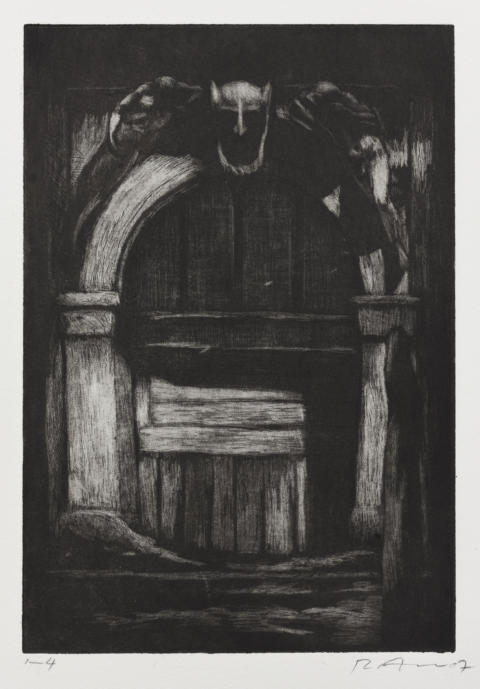 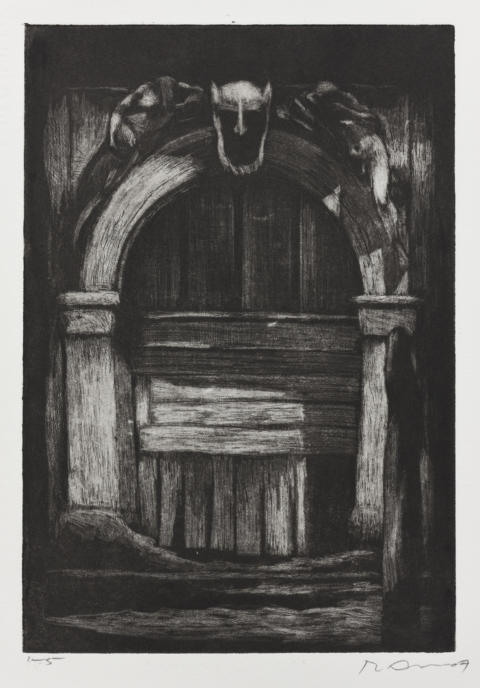 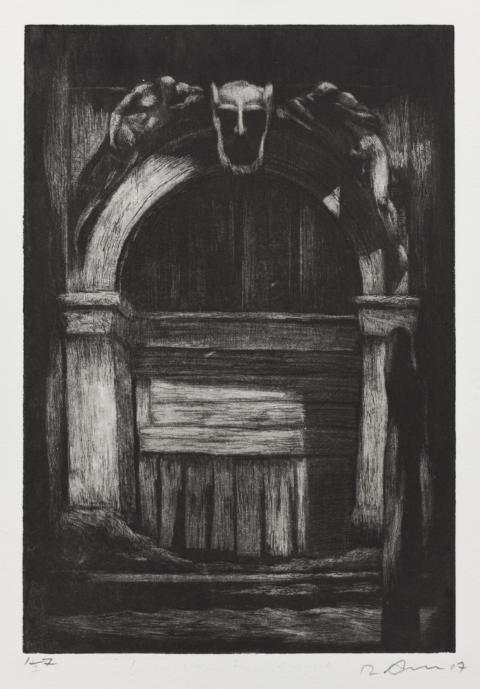 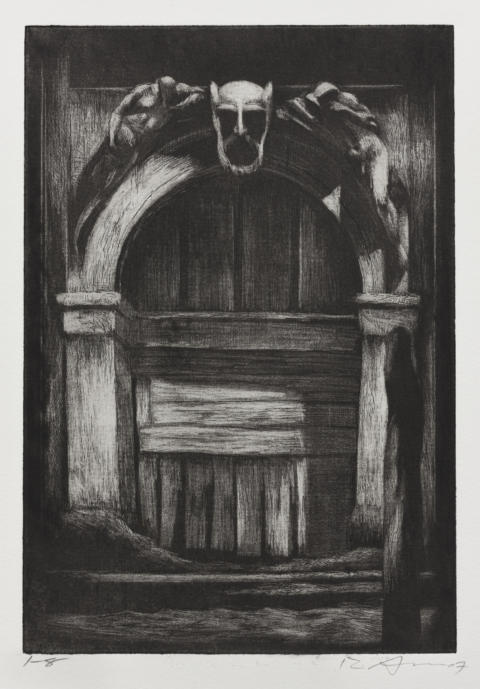 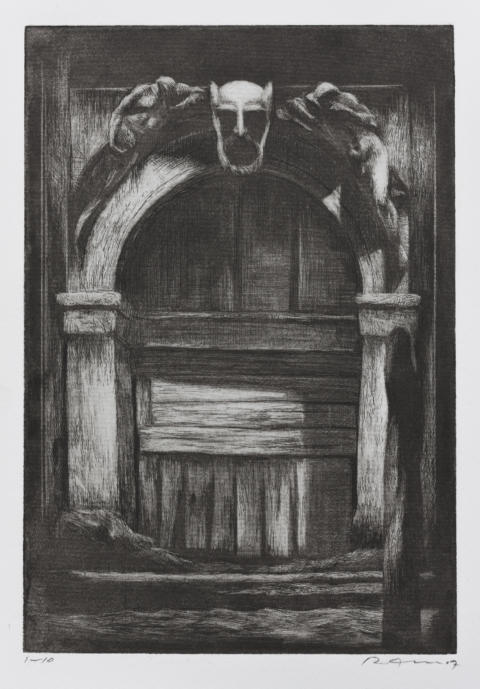 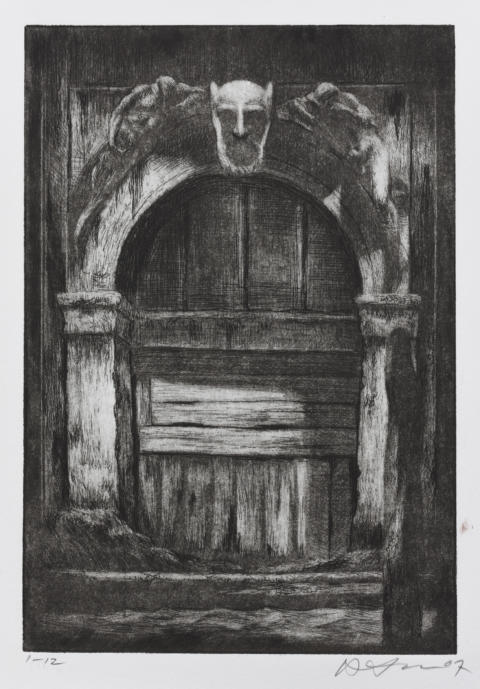 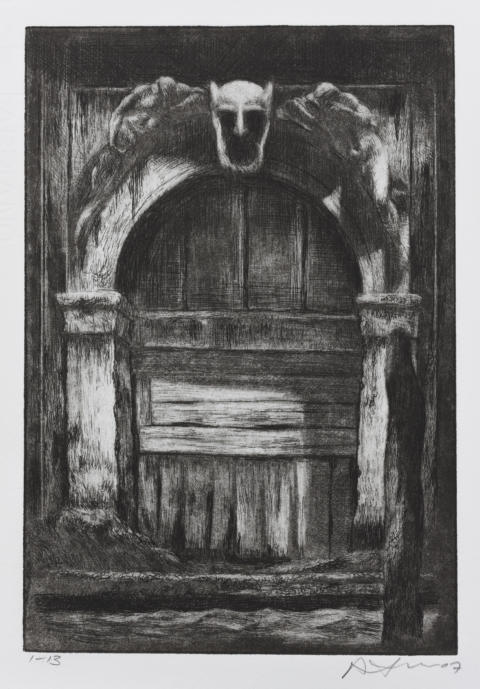 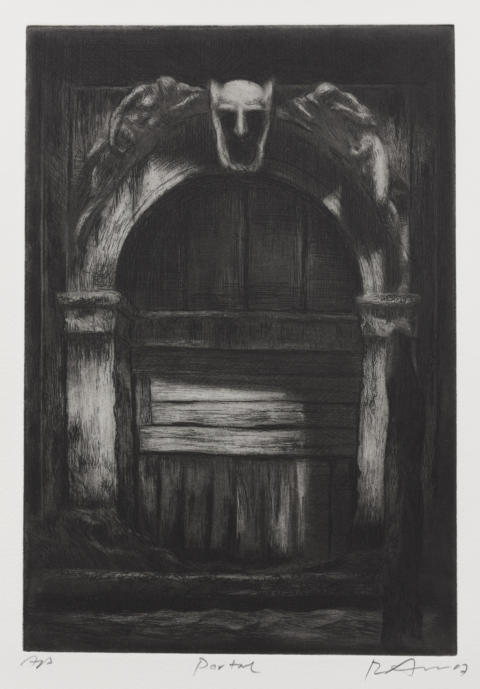 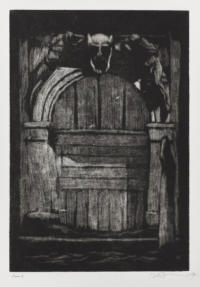 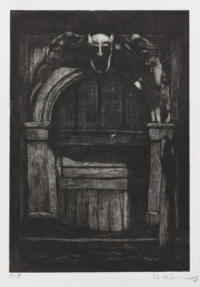 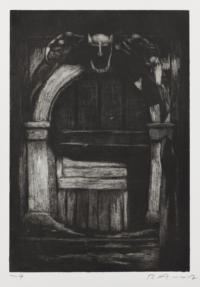 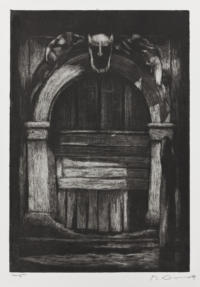 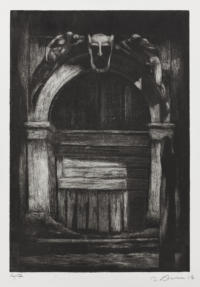 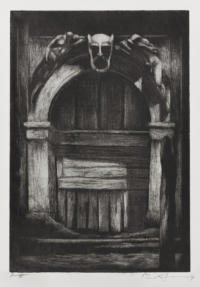 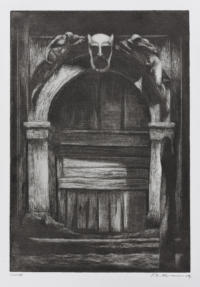 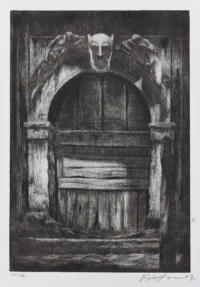 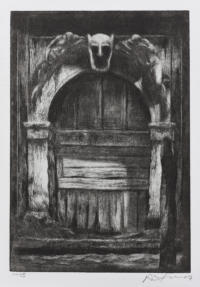 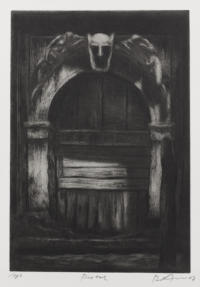 Burnished aquatint. An arched portal, fronting the waters of a canal, is embellished at the top with a mask-like head with pointy ears and a beard; the details of the face are not visible. On either side of the head are two reclining figures. The arch is supported by pilasters with plain rectangular capitals. The portal’s door is made of heavy wooden beams, oriented vertically at top and bottom, and bisected with horizontal beams. The image is rendered entirely in burnished aquatint.

Line etching has been freely applied across many areas of the plate. The area above both eyebrows has been evened out by burnishing and the entire forehead has been lightened.

The plate has been burnished in many areas, especially on the pilasters, on the left segment of the arch and in the upper right spandrel; this provides the subject with greater clarity. The central mask-like head now has a continuous beard; the irregular area beneath the wooden door has been more clearly defined, and an irregular narrow area of light in the water has supplanted the small waves present in the earlier states.

The tonal balance of the plate has been lightened overall through burnishing. The dark shadows on the wooden door have been lightened, as have the triangular sections in the spandrels immediately above the two reclining figures of the arch. The narrow area of light on the water has been extended. The source of light is now unmistakably at the right.

The area above the eyes on the mask-like head has been burnished.

Large areas of aquatint have been lightly and evenly burnished, creating a smoother, more mysterious tone and clarifying architectural details. A clear rectangular framework, outlined with a burnished line, has been applied around the arch. The mask-like head now has a moustache burnished in; it consists of two oblique lines extending from the nostrils.

The dark areas of the mask-like head have been burnished to a grey tone, and etching has been added beneath the nose. Vertical lines have been etched into the dark horizontal band above the arch and these extend irregularly to the triangular areas to its left and right. The underside of the arch has been better defined with curved etched lines, while horizontal and vertical hatching has been added to many areas of the wooden door. The outline of the pilasters is now irregular, emphasizing the age and decrepitude of the building. The mounds of earth to the left and right of the doorway have been modelled further with etched lines.

Cross-hatching has been added to the dark horizontal band above the arch. The burnished areas of the mask-like head have been darkened with a mesh of etched lines, while the shadows at the top of the arch have been darkened with vertical hatching. Flicks of etching define the irregular surface of the pilasters. Irregular scribbles of etching tone down the burnished horizontal line that defines the upper edge of the ground, and a dark etched band now appears above the scalloped waves below. There are four variant impressions of this state.

This etching is based on a drawing, dated 4 June 2007, that Amor made on the spot in his large Venice Sketchbook. The portal belongs to the seventeenth-century Palazzo Flangini on the Grand Canal, Cannaregio 252, close to where Amor was staying. He could see the Palazzo Flangini from his room and it appears in a watercolour sketch, dated 11 June 2007, of the view from his window (Niagara Galleries 2009). At that time the palazzo, which is now restored, was undergoing renovations, and Amor has described it as being shabby, with its portal boarded up and curtains billowing from windows on the top floor. For Amor, this was a building that typified Venetian architecture, which he has described as ‘all darkness and death’. Hence, he has represented the portal as an image of metaphoric darkness – an image redolent of a porta dei morti or ‘door of the dead’.

An unadorned rectangular doorway, opening onto total blackness, first appeared as an ominous motif in Doorway, painted in 2004 (Short 2008), the year of Amor’s illness with Myelodysplastic Syndrome (MDS), from which he recovered after a bone marrow transplant.

E.138 began as a burnished aquatint, conceived in darkness, like a mezzotint. Burnished aquatints are not as resilient as mezzotints, and so, concerned to get the dark tones that he wanted, Amor introduced line etching in the third state. He did this to intensify the darks, finally adding drypoint in order to obtain the required depth of black.