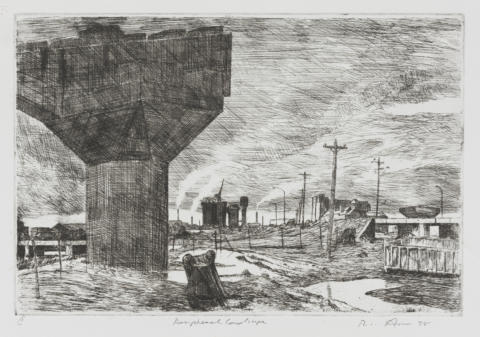 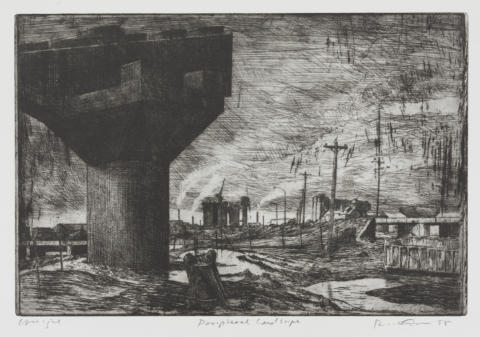 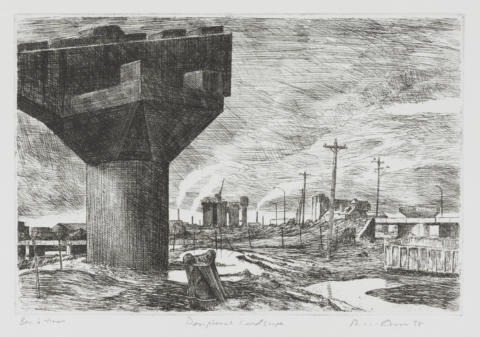 Etching. A bleak industrial landscape in Melbourne, in which a freeway is under construction. The view is dominated at the left by a giant concrete pillar constructed to support a flyover, while at the right are several electricity poles, as well as pools of water. In the distance are three smoking industrial chimneys. The composition is essentially complete in its detail, although the modelling of the pillar remains unfinished. There are two variant impressions of this state.

In the printing of this unique impression, the plate was put through the press twice: the randomly scratched verso of the plate was printed first, followed by the recto. The visual ‘noise’ provided by the scattered, accidental markings on the verso of the plate gives the image, especially the sky at right, a gritty texture, while also visually echoing the disfigurement of the landscape. The markings could also be seen to suggest squally weather.

The pillar has been burnished at left, so that it now has a stronger highlight and appears rounder. Burnishing has been extended to the geometric planes of the upper part of the pillar and, at the lower right, to parts of the raised road behind the rectangular waste skip. An oblique area of loosely etched strokes has been added to the ground beneath the pillar. There are two variant impressions of this state.

E.112 depicts road building works during the construction of one of Melbourne’s toll roads – CityLink (1996–2000) – in the vicinity of Footscray, in the city’s inner west. The etching is one of several versions of the subject, which include paintings and drawings; all of the various versions originated in plein-air studies. E.112 followed on from two paintings that were exhibited at Niagara Galleries in 1998 (Niagara Galleries 1998). After Amor had made the print, he made a drawing of its subject, though with the view in reverse direction.

Urban wastelands and industrial views are important subjects in Amor’s art. They are always based on direct observation and on studies painted or drawn on the spot; however, when Amor uses these studies as the basis for other works, he often changes details and rearranges the features of the original scene. In the case of E.112, the subject combines aspects of two works done on the spot: an oil depicting a construction site in Footscray, and a watercolour depicting a view in the industrial western suburbs of Melbourne (both in Perry 2013).

As Amor worked through the three states of the etching, his major concern was to give a sense of solidity and weight to the giant pillar at left, and he achieved this largely through careful, progressive modelling with the burnisher. In printing the third state of E.112, he also produced a unique experimental impression (III.c): he took the copper plate through the press twice, printing an impression of the etching over an impression of the scratched verso of the plate. The result was an image that amplifies the ugliness, disorder and desolation of its subject.

Amor has referred to E.112 as an unconscious reimagining of the landscape described in George Orwell’s The Road to Wigan Pier (1937), a book that gives an account of the dire social conditions in northern England during the 1930s. Orwell later referred to Wigan as a place of slag heaps, a place ‘picked on as a symbol of the ugliness of the industrial areas’ (Orwell 1943).

Amor greatly admires George Orwell for his political beliefs as well as for the clarity of his thought and writing.