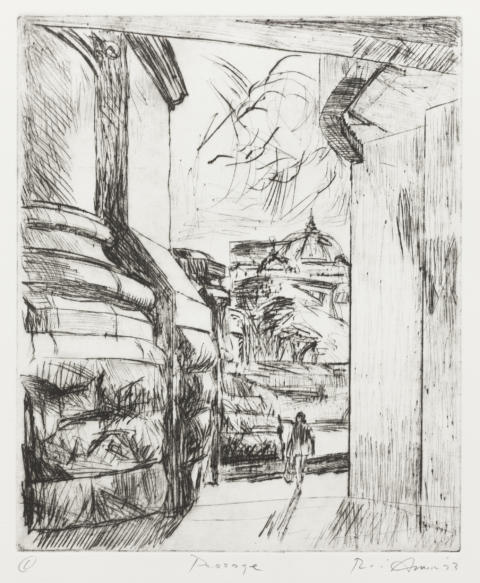 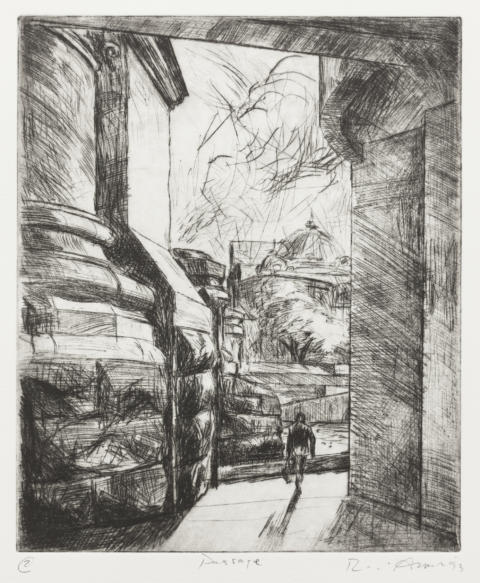 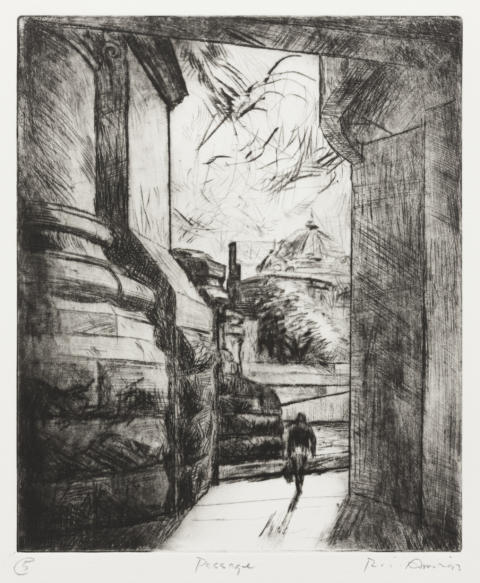 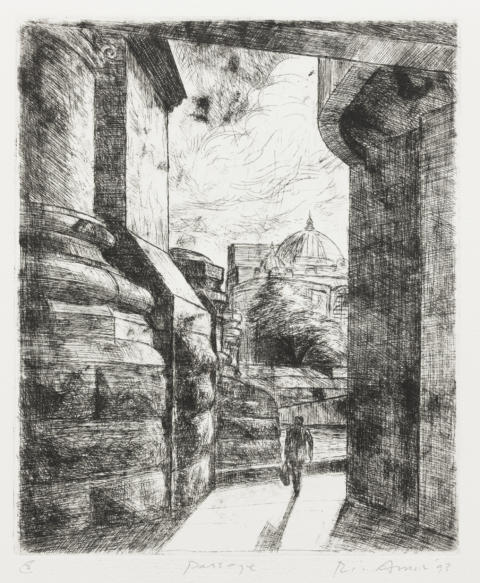 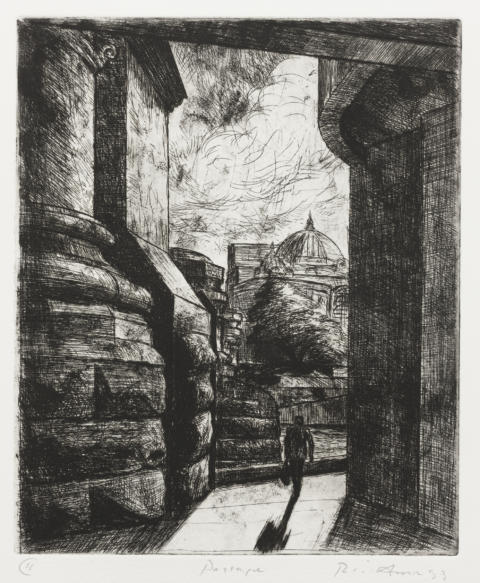 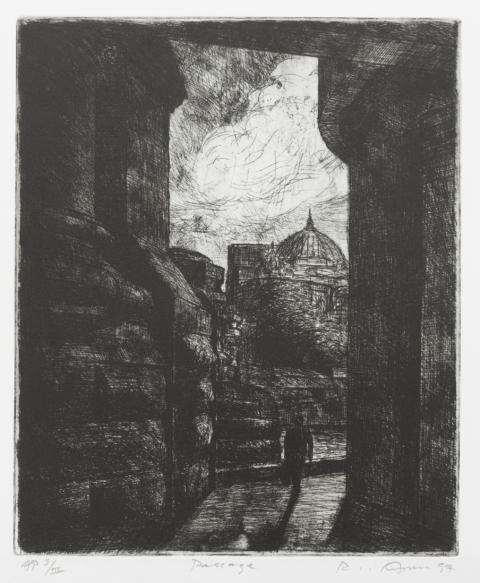 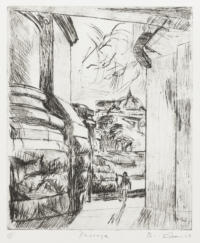 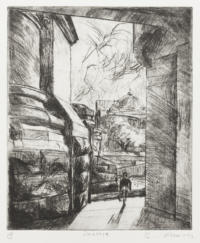 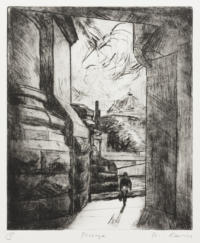 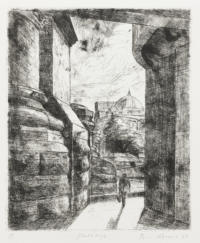 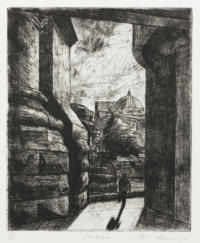 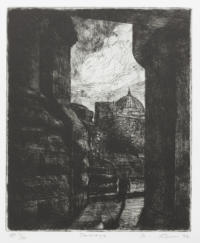 Drypoint. A man carrying a suitcase is seen walking along a walkway between two massive structures. On the left are large nineteenth-century rusticated columns and on the right is the smooth-faced foundation or wall of a concrete modernist building. The view in the distance is of trees and buildings, including one with a prominent dome. The subject is summarily scored in drypoint.

Drypoint has been added to the sky and to the illuminated segment of architecture at the left. There are two variant impressions of this state.

The plate has been reworked, with burr having been burnished away and replaced with etching. Foul biting is evident, especially in the upper sky.

New etched lines have been introduced to the man’s shadow, and drypoint has been added just below the tree in the middle distance.

Etching has been added to many areas of the plate, creating a dark image in which the figure of the man is almost swallowed up by the deep shadows. An area of foul biting at the bottom centre edge appears as an irregular light patch. There are three variant impressions of this state.

Description of Featured Image
A man carrying a suitcase is seen walking along a passageway between two massive structures. He walks into the light. On the left are large nineteenth-century rusticated columns and on the right is the smooth-faced foundation or wall of a concrete modernist building. The view in the distance is of buildings, including one with a prominent dome, in front of which is a tree.
Where Made
Dunmoochin, Cottles Bridge
Medium Category and Technique
Intaglio Print: Drypoint, etching and foul biting on copper
Support
Wove paper. Identified papers: Arches paper with watermark: ‘ARCHES / FRANCE’ with infinity symbol.
Dimensions
Image size: 320 x 265 mm
Matrix size: 326 x 267 mm
Artist’s Record Number
RAE.68 (1993), RAE.116 (1997)
Printer(s) and Workshop(s)
All impressions printed by Rick Amor in his Dunmoochin studio, Cottles Bridge.
Summary Edition Information
Ten states. Nominal edition of ten, but only two impressions printed and numbered, 1993.
Exhibitions
University of Melbourne 2014: Ian Potter Museum of Art, University of Melbourne, Parkville (Melbourne), The Piranesi Effect, 20 February – 25 May 2014, no. 42 (1997).
Collections
State Library of Victoria, Melbourne: eleven state impressions, numbered 1 through 11, all dated 1993.
National Gallery of Australia, Canberra: ed. 2/10, dated 1993 (2007.657).
Comment

The scene depicted here is a view from the south bank of the Yarra River, beneath Princes Bridge, across to the dome of Flinders Street Station in central Melbourne. The rusticated masonry belongs to pillars of the bridge (built 1886–88), and the smooth concrete wall to the lower part of the Melbourne Concert Hall (now Hamer Hall).

This drypoint is one of three print versions of the subject, the others being a large woodcut of 1993, which shows the scene from a very slightly different perspective, and a small etching begun in 1996 and reworked in 1998 (cat. no. E.107).

The first five states of E.073 were rendered entirely in drypoint, but the need for crisper definition of architectural details, and for clearer spacial recession, prompted Amor to burnish back the plate in the sixth state and to introduce etching to the matrix. The following three states combined work in etching and drypoint; in 1993 the artist began printing a small edition, but printed only two impressions.

Amor returned to the plate four years later, in 1997, having in the meantime created the small etched version of the subject (cat. no. E.107). He reworked the large plate, adding considerably more etching and thereby producing a substantially darker image overall. However, he decided against printing a second edition.