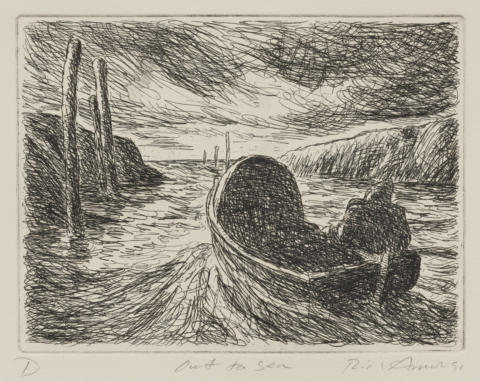 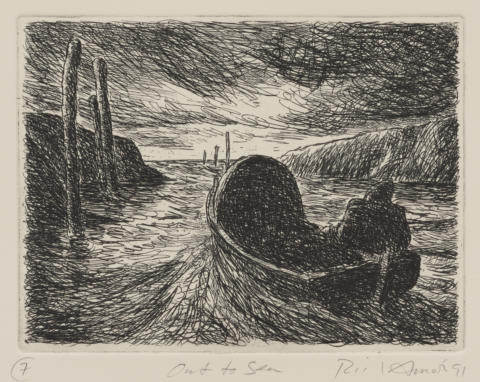 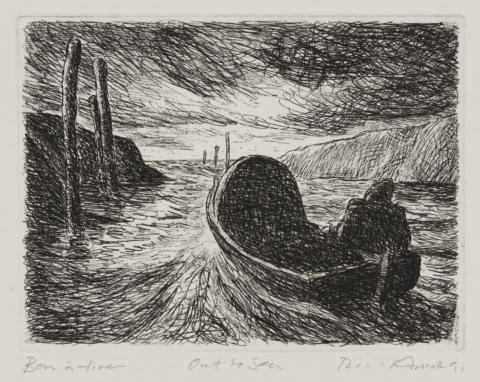 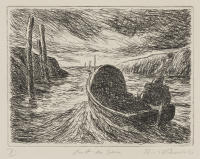 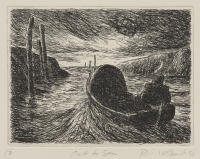 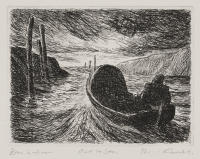 Etching. A view of the mouth of a river, with three mooring poles at left and others in the far distance. In the right foreground is a small motorized boat with a man at the stern, steering the craft out to sea. The subject is essentially complete. A small area of grey burnishing marks is visible in the upper left part of the sky.

More etching has been added throughout the plate: to the sea, the sky, the boat, the land at both right and left, and all the mooring poles. The whole image appears much darker – now a late-twilight scene.

Additional burnishing has been applied: to the promontory at right, to the lower part of the sky, and around the prow of the boat.

The setting in this etching is the mouth of Kananook Creek, where it enters Port Phillip Bay at Frankston. The subject of the print has been etched from memory, which may explain the primordial atmosphere of the scene. Motorized dinghies were common during Amor’s childhood, but the one depicted here, with its hooded boatman, inevitably calls to mind the vessel in which the mythical figure of Charon ferried the dead to the underworld, across the river Styx.

In the early 1990s, Amor made a number of works that present variations on this subject, including two woodcuts that are close variants of the composition seen in E.036, and a slightly later etching, The boat, 1991 (cat. no. E.056), which depicts the boatman on his return from the sea. A pencil drawing from 1996 continues the theme, but its rendering relies more on observation than it does on the transformations of memory (Niagara Galleries 1997).