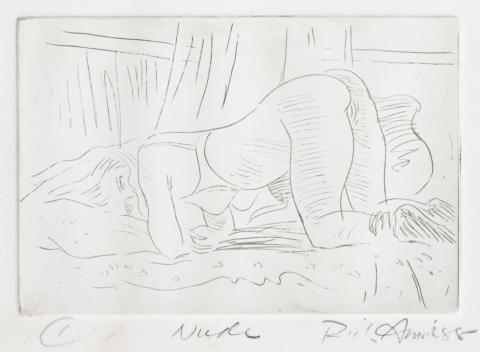 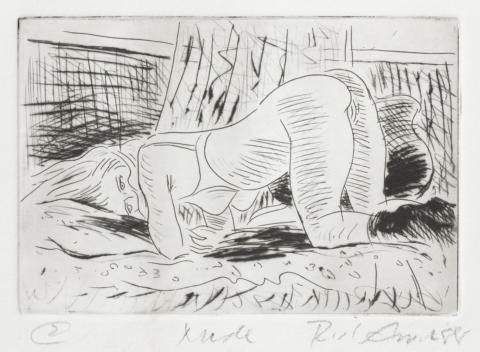 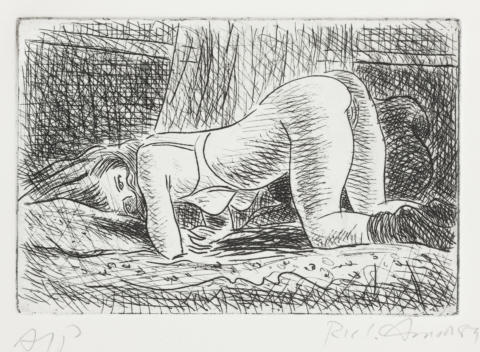 Etching. A woman wearing socks and a brassiere lies on a bed, supporting herself on her knees and elbows. Her head is turned frontwards, with only the eyes visible. The depiction omits most tonal definition, and the entire scene is summarily delineated with pure line etching.

Drypoint has been added to the bed, the background, and the woman’s hair.

More etched hatching has been added to the left of the bedspread, and on parts of the face and body, so as to increase the sense of plasticity and articulation. The whole now appears to be set in half light. There are two variant impressions of this state, one dated 1988 and the other dated 1989.

Catalogue Number
E.006
Title and Date
Nude 1988
Description of Featured Image
A woman wearing socks and a brassiere poses on a bed, supporting herself on her knees and elbows; her head rests on the bed and is turned frontwards, with only the eyes visible. Behind the bed is a dark wall, with a central swag of curtains.
Where Made
Phillip Institute of Technology, Bundoora, Melbourne
Medium Category and Technique
Intaglio Print: Etching and drypoint on zinc
Support
Wove paper. Identified papers: Fabriano paper with watermark: ‘CMF’ with star above, within a circle/oval; Arches Moulin du Gué paper with partial watermark: ‘M[oulin?] … gué’.
Dimensions
Image size: 100 x 151 mm
Artist’s Record Number
EX.4. Amor’s intaglio record books do not contain an entry for this work.
Printer(s) and Workshop(s)
All impressions printed by Rick Amor at Phillip Institute of Technology, Bundoora (Melbourne).
Summary Edition Information
Five states. No edition.
Collections
State Library of Victoria, Melbourne: five state impressions, numbered 1 through 5.
Comment

This etching is based on a drawing done from life on 9 October 1988, at Dunmoochin, the artists’ colony at Cottles Bridge (outer Melbourne) to which Amor and his partner, the artist Meg Williams, moved in May 1985. Williams is the model here, and the curtain that hangs loosely down the centre of the composition is a mosquito net. The pencil drawing on which this work is based shows the subject in reverse orientation and rendered from a slightly greater distance. The subject was drawn on the plate at Dunmoochin, but was etched and printed at Phillip Institute of Technology, Bundoora.

The matrix on which E.006 was made has been lost, but Amor recalls that it was a zinc plate, not copper.