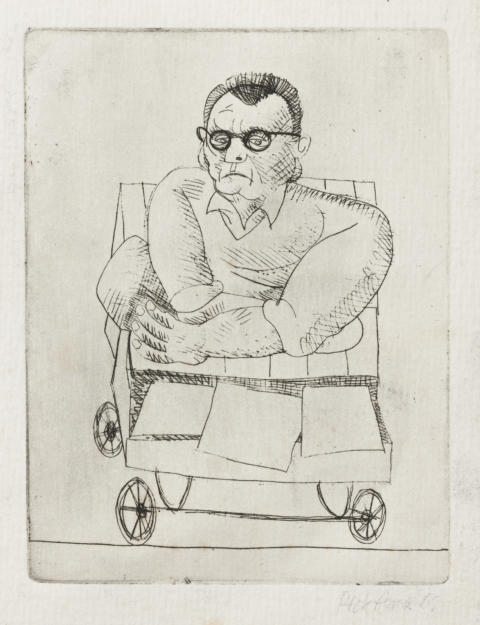 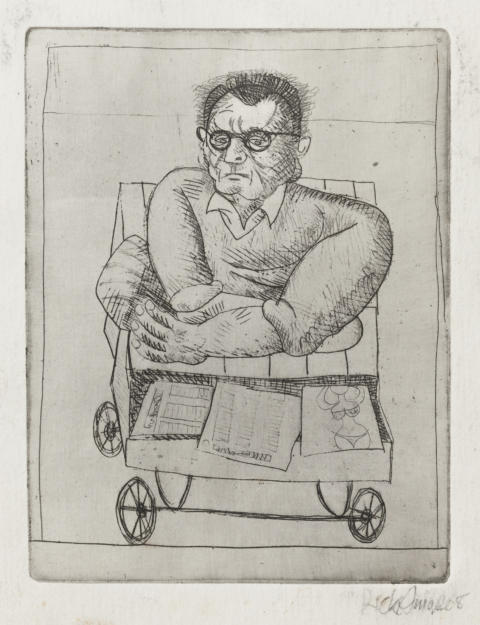 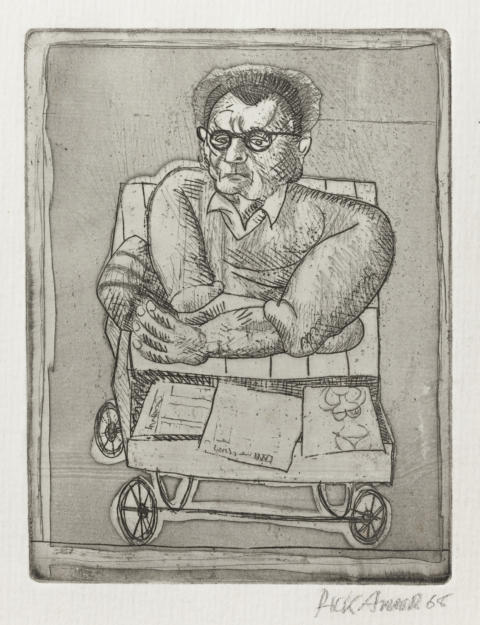 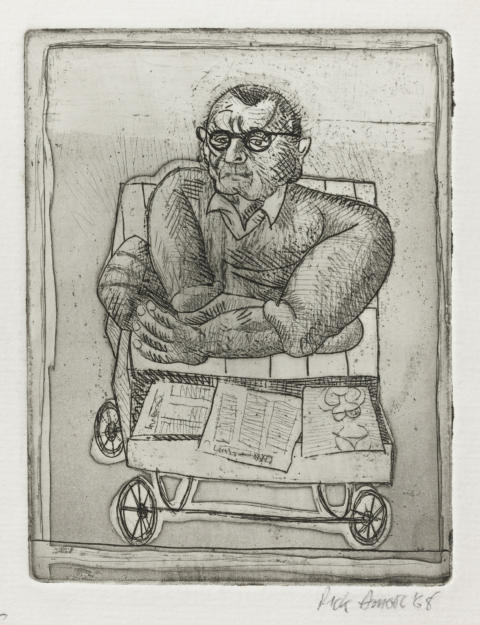 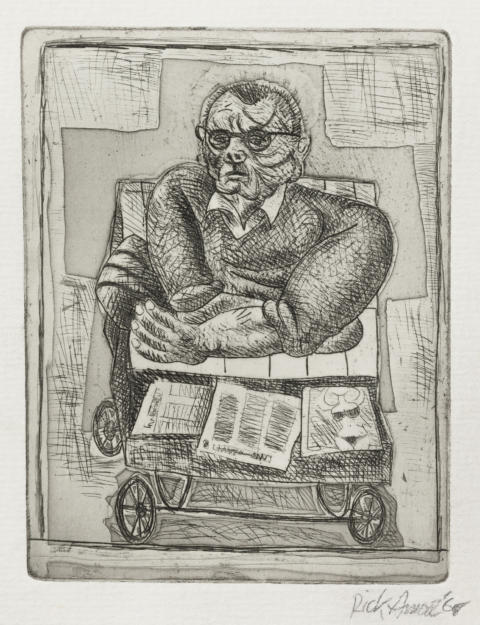 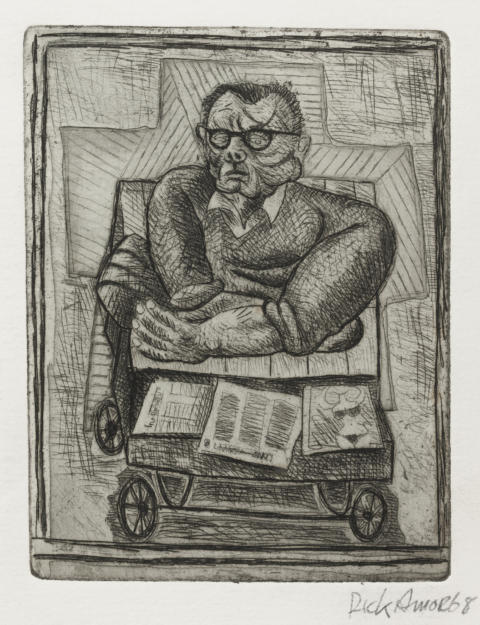 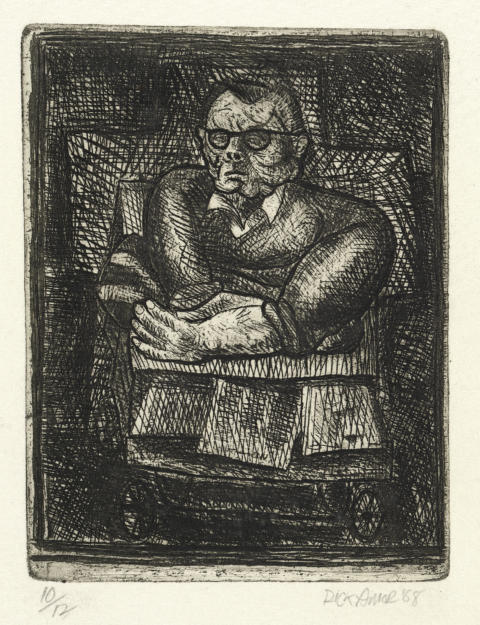 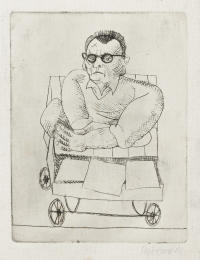 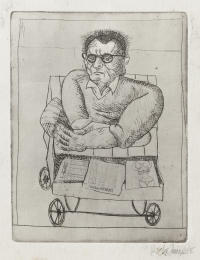 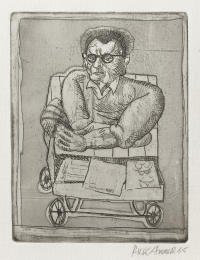 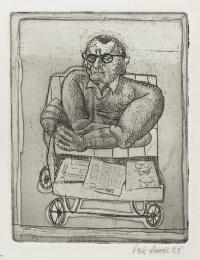 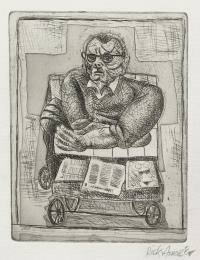 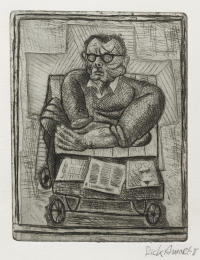 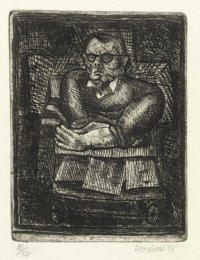 Etching. A disabled, legless man sits in a low, wheeled trolley, leaning against a pillow at the left, his powerful arms crossed and his sleeves rolled up. Spread out before him, in the trolley, are three blank sheets of paper. The man’s hair sticks up above the crown of his balding head and he is wearing spectacles. Below the front wheels of the trolley is a freely drawn horizontal line extending across the plate.

Three text columns beneath a banner heading have been indicated on the sheets at the centre and the left, and a buxom young woman in a bikini has been added to the sheet at the right, which has now become a girlie magazine. The man’s hair has been extended outward, and lightly etched modelling has been added to his face and body. A framing line surrounding the main motif has also been added.

An area of even open-bite tone has been added to the background, within the framing line, and to a strip along the bottom.

The man’s hair has been shortened by being burnished down; his lips and a strip of open-bite etching behind his head have also been burnished to a lighter tone.

A large cross shape has been added with open-bite etching behind the man, echoing, in broad outline, his head and shoulders. Irregular cross-hatching has been added around this shape. An oblique, zigzag scribble has been added to the background on the cover of the girlie magazine.

A light pattern of oblique lines facing left and right has been added to the cross shape. The wooden slats of the top of the trolley have been lightly shaded below the man’s arms.

Hatching and cross-hatching have been added across the whole area within the framing line, except for the figure of the man.

The subject of this etching is a man who used to sell newspapers on the corner of Swanston Street and Flinders Lane, Melbourne, whom Amor would see every day on his way to the National Gallery of Victoria Art School (NGVAS). Both the subject matter and the rendering, with its emphatic contours, systematic vocabulary of marks, and deep biting, recall the works of Amor’s teacher John Brack, especially his etchings of medical subjects. However, the process of developing the image across a large number of states  reflects directly the teaching of Murray Walker (b. 1937), Amor’s etching teacher at the NGVAS. The nineteen states of E.002 form a programmatic record of the procedures and steps involved in creating an etching, and document a learning process. The way in which the image has been deliberately and methodically constructed betrays its origins as one of Amor’s earliest works; however, it is also the most fully realized and successful of his early etchings. The lessons of intaglio printmaking, especially the opportunities it affords for changing an image by reworking the plate, were something that Amor would continue to exploit, albeit in an instinctive rather than a systematic way.

The major changes in the development of the image began in the second state, with the addition of details identifying the three blank sheets of paper as newsprint, followed by the addition of tonal open-bite etching in the fourth state, the introduction of a large cross shape behind the figure in the tenth state, and the insertion of multi-directional patches of diagonal hatching in the twelfth state.

This etching preceded several painted versions of the subject. The first was a small oil, which remains in Amor’s collection. A larger version in oils was submitted in 1968 as a scholarship painting to the NGVAS; this work was destroyed by the artist in 1969. Another, related version was painted in 1974.

Gary Catalano observed that the man’s likeness reappears in the large central figure in Morning train, a painting that also dates from 1968 (Catalano 2001), and he saw this as evidence of the early development of Amor’s personal vocabulary of images. Stephen Coppel has suggested that the dense mesh of hatching that covers the image in the etching might be seen as a metaphor for the man’s entrapment in his disabled condition (Coppel 2011). The defining – and confining – cross shape behind the man supports such a reading of the image.

The copper plate on which E.002 was made has been lost.