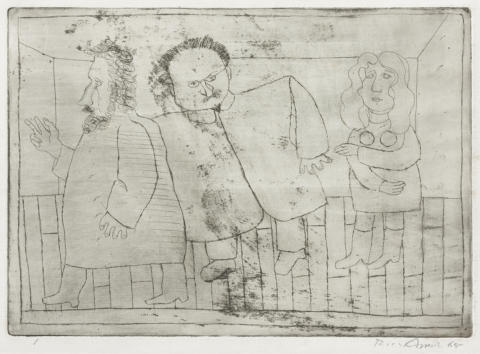 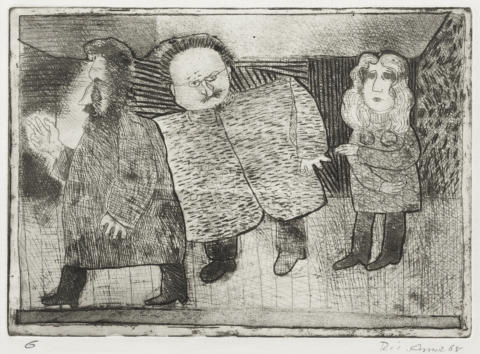 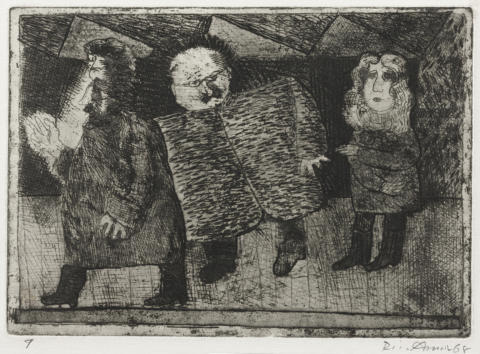 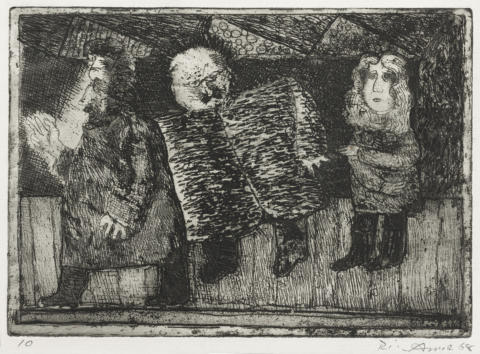 Etching. Three figures – two male and one female − are depicted standing in a room with a wooden floor. They are, from left to right: Jesus, shown in profile and walking to the left, his right hand raised in a gesture of blessing; the Russian revolutionary Leon Trotsky, wearing a coat and glasses; and a woman identified as Angela, a friend of the artist’s. The subject is lightly etched. There is considerable foul biting present, particularly across the figure of Trotsky and on the floor below his feet.

Oblique and vertical stripes have been added behind the figures, whose contours have been re-etched. An area of irregular spots has been added to the wall at the far right. Trotsky’s coat has been patterned all over with short dashes.

The plate has been further etched all over, and a pattern of circles and stripes added to the zigzag area. The plate is now very dark and overworked, and prints indistinctly.

Catalogue Number
E.003
Title and Date
Jesus, Trotsky and Angela 1968
Description of Featured Image
Three figures stand in a room, against a dark background; above them is a prominent zigzag shape, like that of a factory roof. The figure at left is Jesus, who is shown in left profile, his right hand raised in a gesture of blessing. In the middle stands the Russian revolutionary Leon Trotsky, wearing his distinctive spectacles and a coat. At the right is Angela, her arms crossed, wearing a dress and boots.
Where Made
National Gallery of Victoria Art School, Melbourne
Medium Category and Technique
Intaglio Print: Etching and open-bite etching on copper
Support
Wove paper. Identified papers: No papers identified, but only one type of wove paper has been used.
Dimensions
Image size: 215 x 302 mm
Artist’s Record Number
EX.3. Amor’s intaglio record books do not contain an entry for this work.
Printer(s) and Workshop(s)
All impressions printed by Rick Amor at the National Gallery of Victoria Art School, Melbourne.
Summary Edition Information
Ten states. No edition.
Collections
State Library of Victoria, Melbourne: ten state impressions, numbered 1 through 10 (though not in sequence).
National Gallery of Australia, Canberra: AP (91.794).
Comment

This is the last of three surviving etchings that Amor made in 1968 while still a student at the National Gallery of Victoria Art School. The work depicts a puzzling combination of figures whose relationship to one another is unclear. Amor is unable to explain the meaning of this early composition, putting it down to youthful whimsy but agreeing that the assemblage might once have had a particular significance, although if so he can no longer remember it.

The central figure of Trotsky is not solely a political reference, as would initially seem to be the case. Amor recalls that the figure was inspired by a friend of his father’s, Anthony ‘Wally’ Driscoll, a book and magazine illustrator, who looked somewhat like the Russian revolutionary Leon Trotsky and who occasionally liked to humorously play up the resemblance. Driscoll represented Amor’s first encounter with the world of the bohemian artist, an appealing idea for a young art student. Angela, with her blond, wavy hair, appears in Amor’s first etching (cat. no. E.001), as well as in relief prints and paintings of the period. She was a girlfriend at the time, and an art student at the Royal Melbourne Institute of Technology, which in 1968 was situated across the road from the NGVAS.

The progression of the ten states of this etching shows that technical problems emerged early in its making, and continued to the end. Added to this was the compositional awkwardness of the frieze-like assemblage of the three figures in a confined space. The artist attempted to address this difficulty by incorporating an upper zigzag in the penultimate state, with this motif serving to echo the positions of the figures.

Amor recalls making a colour linocut of the subject of E.003, but this has not survived. After he finished the present print, two decades would elapse before he made his next etching, in 1988. In the meantime, during the 1970s, he focused on making relief prints.

The copper plate on which E.003 was made has been lost.