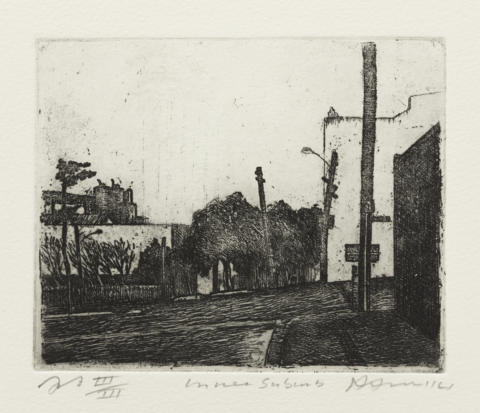 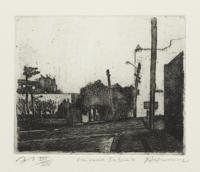 Etching and drypoint. A view of a junction of suburban streets, on a hill, with three telegraph poles at the right, and bushy trees receding in the middle distance. At the centre right is the side view of a tall nineteenth-century terrace house, while in the left distance are cylindrical grain silos. To the right of the silos is the ghostly outline of a tall building that has been burnished out. There are five variant impressions of this the only state.

Catalogue Number
E.174
Title and Date
Inner suburb 2014
Description of Featured Image
A view of a street junction on a hill, with three telegraph poles, bushy trees receding in the middle distance, the side of a tall nineteenth-century terrace house, at right, and grain silos in the left distance. To the right of the silos is the ghostly outline of a tall building that has been burnished out.
Where Made
Alphington, Melbourne
Medium Category and Technique
Intaglio Print: Etching and drypoint on copper
Support
Wove paper. Identified papers: Somerset paper.
Dimensions
Image size: 120 x 146 mm
Matrix size: 120 x 148 mm
Artist’s Record Number
RAE.216
Printer(s) and Workshop(s)
All impressions printed by Rick Amor in his Alphington studio.
Summary Edition Information
One state. No edition.
Collections
State Library of Victoria, Melbourne: AP III/III.
Comment

This etching depicts a view from the corner of Queensberry Street and Munster Terrace, North Melbourne, and is based on a painting done on the spot in 2014.

North Melbourne is largely a nineteenth-century inner suburb, which combines industrial and residential areas; since the 1980s it has been undergoing gentrification. Amor has painted in the area for many years, having been drawn to those parts in which industry and homes conspicuously overlap.

A prominent building on Munster Terrace is Weston Milling’s tall flour mill – once called Love’s Mill – which was originally included in this etching, but which Amor burnished away so as to create a scene of greater bleakness. The ghostly remains of the building are still present at the centre left of the image.