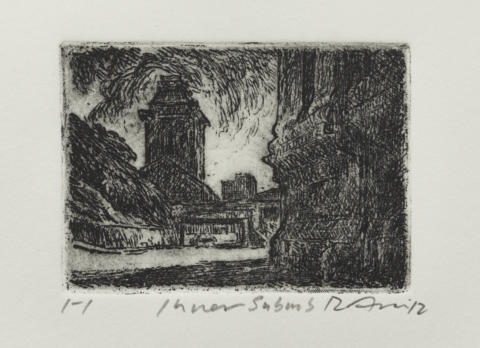 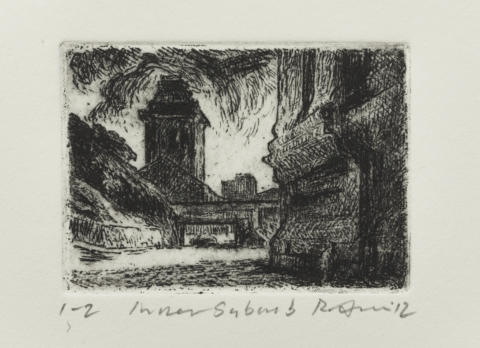 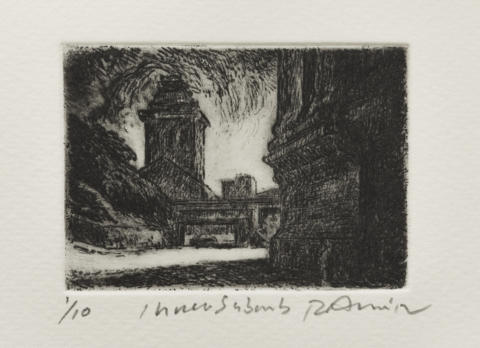 Etching. A composite street view in a nineteenth-century inner suburb of Melbourne. In the right foreground is the corner of an old building and in the left middle ground is a shrub-covered embankment, which supports a railway bridge beneath which is a car. Beyond is a nineteenth-century tower and, in the middle, a distant view towards a modern rectangular building. Billowing clouds in the upper sky encircle the tower.

The addition of dark drypoint accents to many areas of the plate has introduced tonal modulation and enhanced the sense of volume and space. Deep shadows have been added to the building at right. The outlines of the bridge and car have been strengthened, as have the architectural details of the tower. Drypoint has been added to the raised bank at left, but the retaining wall has been burnished, as has the long shadow cast by the corner building. Several horizontal lines have been added to the road at the lower left, while the sky at the upper centre has also been darkened. There are two variant impressions of this state.

Drypoint has been added along the far right edge of the building at right.

This is a composite view of various streets and buildings in Melbourne’s inner suburbs and includes the mansard tower located near the corner of Wellington and Langridge Streets, Collingwood. The print was made after an oil of the same title, painted in February 2007; both works are oriented in the same direction and E.168 is very close to the painting in its distribution of light and dark areas, especially in the sky with its wheeling clouds around the tower. The development of the image through its four states addressed this matter of tonal equivalence, as did the wiping of the plate.

The etching resulted from a provocation issued by the writer and publisher Lou Klepac, who challenged Amor to make a miniature etching of a streetscape.