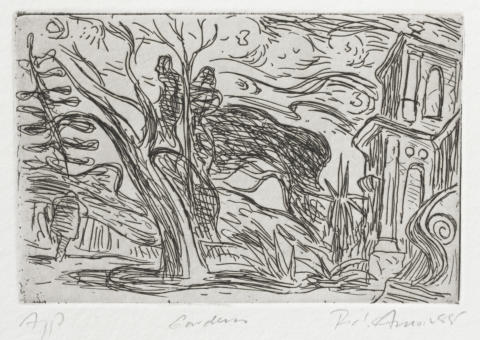 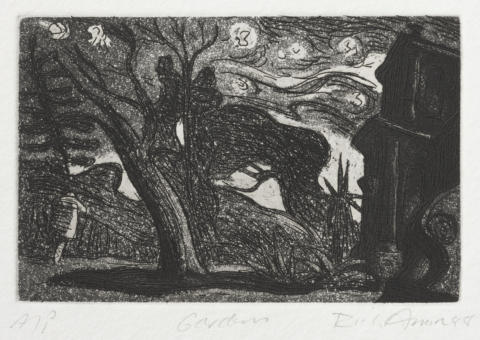 Etching. A freely etched design of the complete composition of a view onto public gardens with tall trees, before the application of aquatint. The sky is loosely etched with curved lines and summary indications of stars. A path curves from the foreground around a prominent tree before disappearing into the left distance; along it walks a man. Along the right edge is a Victorian mansion with a portico, and in the lower right corner a garden ornament in the form of an architectural scroll.

Aquatint has been applied to the composition, creating a night-time scene with a star-filled sky that appears to wheel. There are five (and possibly more) variant impressions of this state, four dated 1988 and one dated 1989.

This etching is based on an oil painting in the collection of Mary Lou Jelbart, Melbourne. The painting has never been exhibited and was bought at first sight in 1988 from Niagara Galleries, Amor’s Melbourne dealer. It depicts a lyrical, Samuel Palmer-esque night-time scene with wheeling stars, a glowing horizon, and a centrally placed street lamp, and the composition is in reverse direction to that of the print. Apart from this, and the omission of the street lamp, the etching closely follows the composition and the nocturnal atmosphere of the painting, condensing its pulsating mood into jewel-like intensity.

There are several variant impressions of the final state of E.005. These show Amor attempting, through the application of ink tone on the plate, to come as close as possible to the nocturnal appearance of the painting. The three proofs printed with dark plate tone, at Amor’s request, by Daniel Moynihan, exemplify this experimentation. However, these impressions came off the press looking murky and tonally undifferentiated, and a cleaner wiping of the plate was decided on.

An intended edition of ten was never completed: Amor printed only the first six impressions. The practice of printing part of an edition in this way was not an uncommon one for young artists at the time E.005 was produced, and arose from economic realities. Fine, pure-rag papers were costly, and artists making prints were reluctant to waste expensive sheets of paper on an edition if there were a risk that it might not recoup the costs involved in printing it.