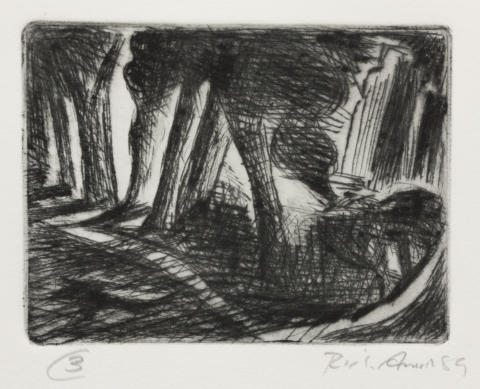 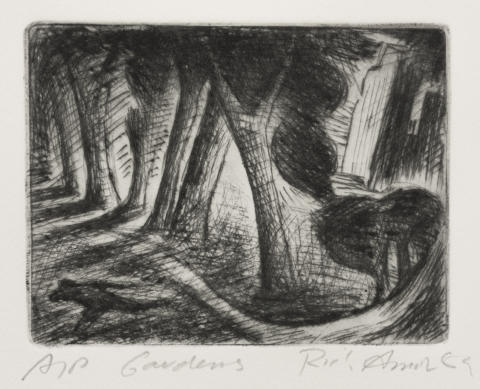 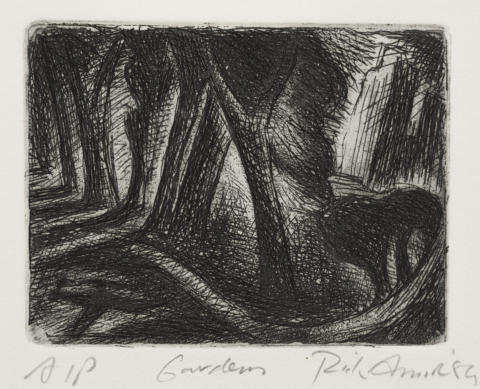 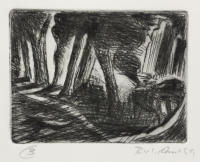 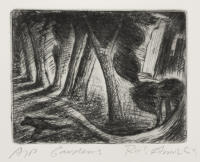 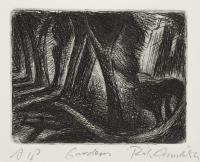 Drypoint. A view of a city park, in which tall trees diagonally traverse the gardens from centre left to lower right. The trees are backlit with strong light. Behind them, at the upper right, are two tall city buildings, and curving around the front of the trees is a narrow path. In the lower left corner is the dark figure of a fleeing man. The scene is scored entirely with drypoint.

The drypointed plate has been densely cross-hatched with etched lines, so that the scene is plunged into darkness. Half-lights have been burnished between the nearest trees. There are two variant impressions of this state.

Etched hatching and definition has been added to many areas of the plate. A vertical line has been burnished along the left contour of the taller of the city buildings at the upper right.

Catalogue Number
E.007
Title and Date
Gardens (with running figure) 1989
Description of Featured Image
A view of city gardens at night, with tall trees diagonally traversing the park from centre left to lower right. Behind the trees, at the upper right, are two tall city buildings, and curving around the front of the trees is a narrow path. In the lower left corner is the dark figure of a fleeing man.
Where Made
Phillip Institute of Technology, Bundoora, Melbourne
Medium Category and Technique
Intaglio Print: Drypoint, etching and burnishing on copper
Support
Wove paper. Identified papers: Fabriano paper with watermark: ‘CMF’ with star above, within a circle/oval.
Dimensions
Image size: 82 x 107 mm
Matrix size: 82 x 108 mm
Artist’s Record Number
RAE.3
Printer(s) and Workshop(s)
All impressions printed by Rick Amor at Phillip Institute of Technology, Bundoora (Melbourne).
Summary Edition Information
Three states. No edition.
Collections
State Library of Victoria, Melbourne: two state impressions, numbered 3 and 6.
Comment

This etching belongs to a small group of related images set in the Fitzroy Gardens – a public park on the rim of the city of Melbourne – and painted and printed around 1988–89. E.007 was made after a woodcut from the same year but is in reverse orientation. The nocturnal setting makes it difficult to distinguish the running figure at the lower left, since it merges into the darkness, appearing to be not simply running, but fleeing, though why and from what is unknown.

Only two numbered state impressions of the work have survived and these are inscribed ‘3’ and ‘6’ respectively, indicating that other impressions were printed, but were destroyed by the artist. The major change to the plate occurred in the second state, with the decision to create a darker image by applying a mesh of etching over the drypoint. The resulting penumbral effect was heightened in the final state with the addition of more etched hatching, and with the etched definition of the contours of the trees, the path, and the running figure.