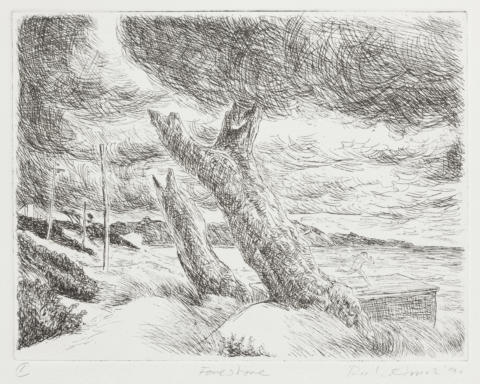 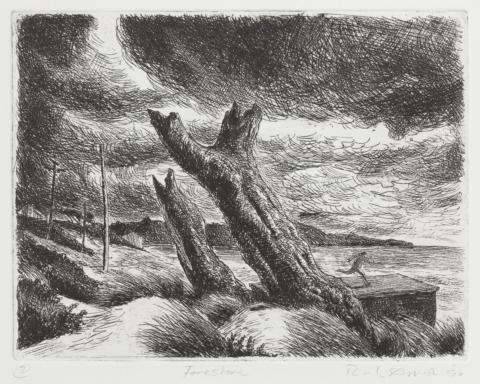 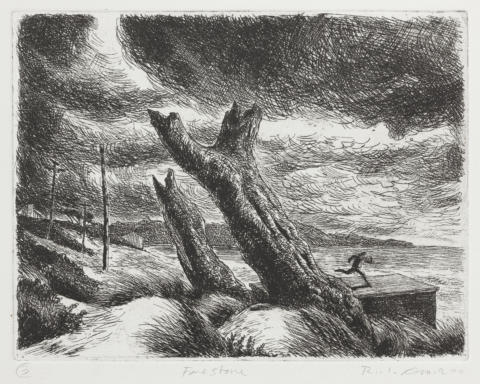 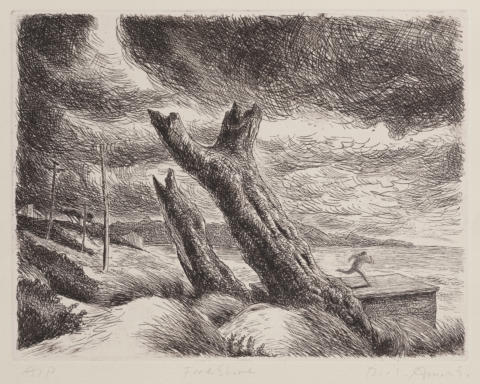 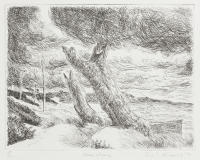 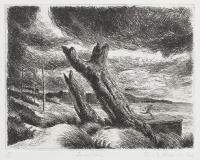 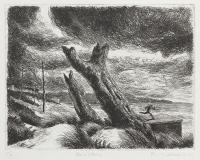 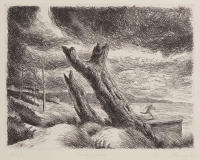 Etching. A beach scene with sand dunes, and with a headland in the far distance. In the foreground are two prominent dead trees, which lean leftwards; below them, to their right, is a boatshed with a flat roof, along which a man runs in the direction of the sea. In the left distance are three telegraph poles; beyond them is the peaked roof of a house, and there is another house depicted nearer the shore. The composition is complete in all essential details but the subject is lightly etched.

Much etching has been added throughout the plate, and drypoint has been introduced to create a more tonal, and much darker, image and to intensify the appearance of the massive clouds and the other markers of stormy weather.

Drypoint accents have been added to the telegraph poles at left, and to the running figure and its shadow.

The headland, the boatshed and the figure have all been burnished to a lighter tone.

Amor has explained that the subject of E.030 was prompted by the memory of a childhood game, played on the Frankston foreshore, whereby he and his friends would race along the flat roof of a boatshed and then jump from it onto the sand below (Catalano 2001). There is nothing playful about this image, however. The apprehension that the young Rick Amor must have felt before jumping off the boatshed roof is transformed here into a more general existential apprehension, which is alluded to metaphorically by the presence of the two dead trees.

The etching is related to two other works by the artist: a drawing in pencil and pastel, Study for ‘Memory of the foreshore’ (Art Gallery of Ballarat, inv. no. 1995.52), which is inscribed with two dates ([19]89 and 1/7/90), and the oil Memory of the foreshore, dated to August 1990. Although the drawing purports to be a study for the painting, it is more likely that the painting follows the etching, as both works depict a running figure, not a stationary one as in the drawing. There are also other details that the print and the painting have in common, most notably the telegraph poles at left.

In the first three states of the etching, Amor moved towards an increasingly clear definition of the subject and an increasingly intense evocation of threatening weather, but in the final state he drew back, toning down the blacks by burnishing areas of drypoint burr.

Ed. 5/10 was offered as a door prize at the McClelland Gallery and Sculpture Park, Langwarrin, at the time of the exhibition Rick Amor: Standing in the Shadows, in 2005.