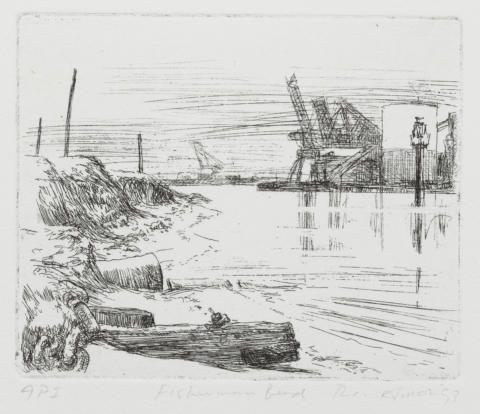 More loose horizontal lines have been added to the sky.

In 1993, when Amor made this etching, Fishermans Bend (formerly Fishermen’s Bend), which lies four kilometres to the west of Melbourne’s CBD, was a large industrial area; much of it is now (2017) earmarked for urban renewal. Coode Island, seen on the right in E.077, is a petrochemical storage area.

The etching presents a composite view based on two plein-air works by Amor: a drawing of the distant view (but moved further up than in reality), and an oil painting that shows the scene depicted in the left half of the print.

This is one of Rick Amor’s most Whistlerian etchings, both in the delicacy of its etched line and in its setting.