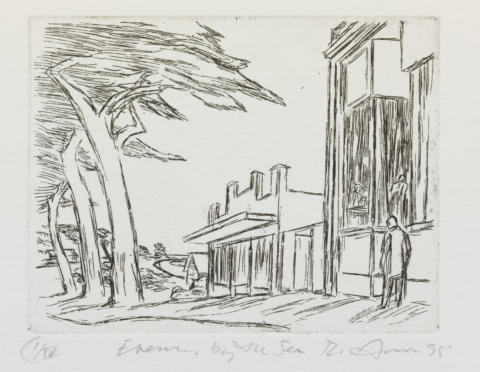 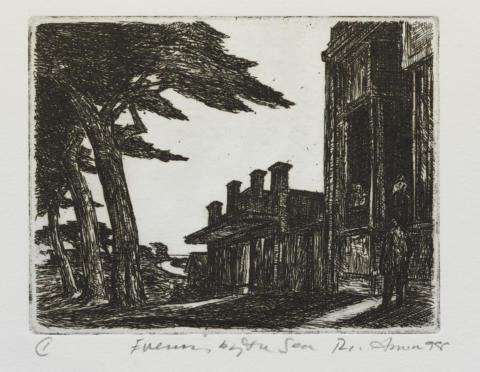 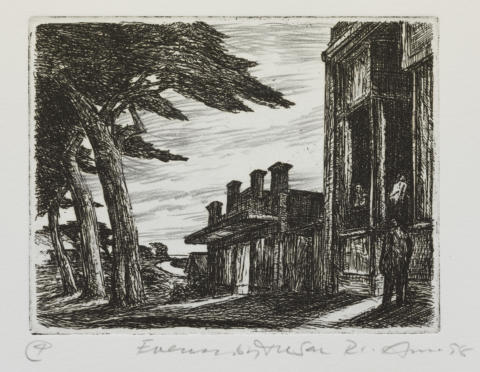 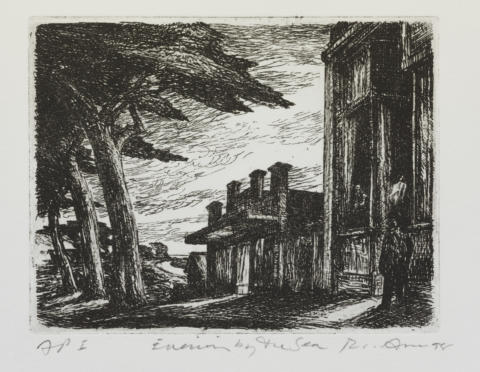 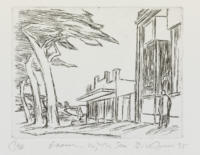 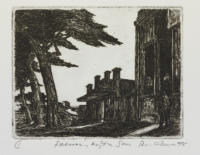 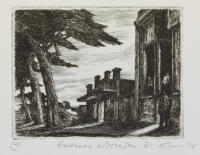 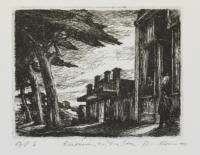 Etching. A beachside view along a road that slopes down to the left, with the curve of a beach visible at the lower centre. In the right half of the composition is a row of shops. Two figures can be seen through the window of the shop nearest the foreground, while a passer-by wearing an overcoat walks on the footpath in the lower right corner. At the left of the image are three tall trees. The sky is cloudless. The subject is etched in irregular, broken outline, but with all the details of the composition in place. There are four variant impressions of this state.

The composition has been comprehensively and closely etched with hatching and cross-hatching, to create a tonal image.

The architectural details of the nearest shop have been further burnished, as has the open door of the single-storey shop, together with the light that floods through it and onto the footpath. There are six variant impressions of this state.

The plate has been re-etched and all the lines are now thicker, except for the newly etched lines representing the clouds. There are three variant impressions of this state.

Catalogue Number
E.111
Title and Date
Evening by the sea 1998
Description of Featured Image
A beachside view along a road that slopes down to the left, with the curve of a beach visible at the lower centre. In the right half of the composition is a row of shops. Two figures can be seen through the window of the shop nearest the foreground, while a passer-by wearing an overcoat walks on the footpath in the lower right corner. At the left of the image are three tall cypresses. The sky is filled with clouds and gives the impression of a vivid sunset.
Where Made
Alphington, Melbourne
Medium Category and Technique
Intaglio Print: Etching and burnishing on copper
Support
Wove paper. Identified papers: BFK Rives paper with watermark: ‘BFK RIVES / FRANCE’ with infinity symbol.
Dimensions
Image size: 88 x 114 mm
Matrix size: 89 x 114 mm
Artist’s Record Number
RAE.121, RAE.125
Printer(s) and Workshop(s)
States I through IV, first edition, and state V, printed by Rick Amor in his Alphington studio. State VI printed by Doug Hails at the Baldessin Press, St Andrews (VI.a), and by Amor in the Alphington studio (VI.b and VI.c). Second edition printed by Doug Hails at the Baldessin Press.
Summary Edition Information
Six states. Two editions. First edition: edition of three numbered impressions, 1998. Second edition: edition of ten numbered impressions, 1998.
Literature
For an illustration of the painting Evening by the sea, 1998, see Niagara Galleries, Rick Amor (exh. cat.), Niagara Galleries, Richmond, Victoria, 1998, cat. no. 10.
Collections
State Library of Victoria, Melbourne: three state impressions, numbered I/IV, II/IV, IV/IV; seven state impressions, numbered 1 through 7; ed. 2/3 and ed. 3/3 (first edition); AP I; ed. 2/10 (second edition).
National Gallery of Australia, Canberra: ed. 1/3 (first edition) (2007.624); ed. 1/10 (second edition) (2007.625).
Comment

This etching is based on a small oil painting, also made in 1998 (Niagara Galleries 1998) – one of several paintings with the same title – and is rendered in the same direction. The small oil is broadly painted, in tones of vivid colour, and includes details, such as telegraph poles, that are not present in the etching. In the far middle distance in the painting is a burning house; this detail too is absent, or at least not readable, in the print.

The subject here is a memory from Amor’s childhood in Frankston, a theme to which he returns repeatedly in his art. E.111 depicts a view of shops on the Nepean Highway, near Kananook Creek (the Nepean Highway is the main road that runs through Frankston). In this instance, the memory from childhood merges with another, later one, from the artist’s student days at the National Gallery of Victoria Art School (1966–68): Amor has always identified the figure in the overcoat, at the right in the etching, with his teacher, the painter John Brack (1920–1999). Amor would regularly see Brack making his way along Swanston Street to the Art School, which in the late 1960s was still on the corner of Swanston and La Trobe Streets, Melbourne.

In order for the etched image to be printed in the same orientation as the painting on which it is based, Amor first drew the subject with compressed charcoal on a sheet of paper; he then placed the sheet face down on a copper plate and transferred the drawing by passing plate and paper through the press. In this way he obtained a reversed image on the plate; upon printing, the image emerged in the same direction as the painting.

E.111 exists in two versions, corresponding to its two editions: the impressions in the first edition are without clouds in the sky, while the impressions in the second edition have clouds. The addition of the clouds, in the fifth state, provided the sky with a heightened intensity suggestive of that of a mackerel sky at sunset. This tonal vividness has its parallel in certain acts of memory, whereby an image is recalled with particular clarity.