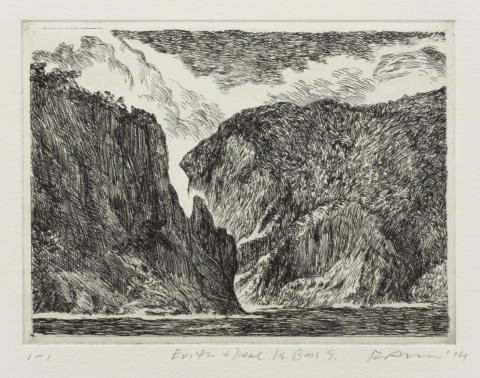 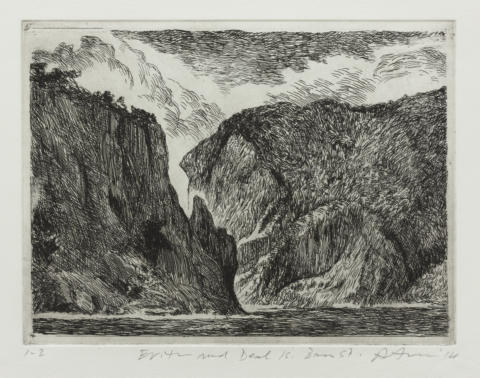 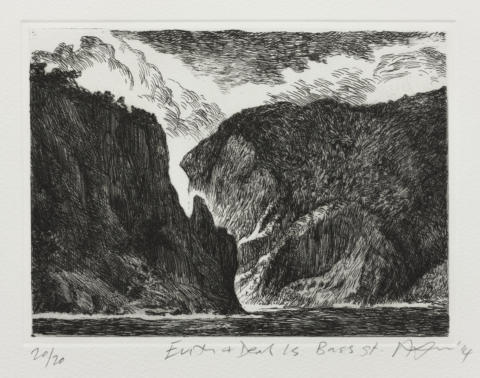 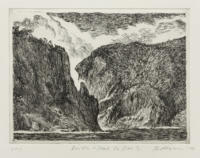 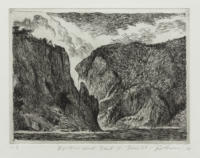 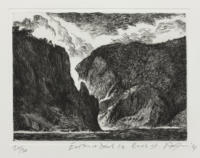 Etching. A view of two overlapping rocky headlands with the suggestion of water between them, and a strip of sea in the foreground. There are two variant impressions of this state.

The darkest shadows on the irregular cliffs of both islands have been deepened with the addition of drypoint accents. The far left vertical face of the furthermost island has been lengthened.

The far left vertical contour of Deal Island is now a broken, rather than continuous, line.

Erith and Deal Islands are the two largest islands of the Kent Group, in Bass Strait, separated from one another by a narrow stretch of sea known as Murray Pass. They are now uninhabited but are accessible by special arrangement. Amor, who stayed on Erith Island during the first fortnight in January 2014, calls it ‘a wild and wonderful place’.

The view depicted here is from the beach at West Cove on Erith Island, looking north-east towards Deal Island. An area of light surrounding the cliffs at the centre of the image indicates the pass between the granite headlands of the two islands (Erith is on the left, Deal on the right). The etching faithfully follows the composition of a watercolour, with adjustments made to accommodate the squarer format of the copper plate. There is also a version of the subject painted in oils (Queen Victoria Museum and Art Gallery, Launceston). Amor etched the present work in the latter half of 2014, during his treatment for lung cancer, with which he had been diagnosed in June of that year. The print was made to be sold as a fundraiser for the Australian Print Workshop.

While difficult to access, Erith Island has a significant place in Australian landscape art, as it has been visited by a number of important artists, including, in 1974, Fred Williams and Clifton Pugh, in the company of the historian Ian Turner and the writer and editor Stephen Murray-Smith. Williams’s depictions of the island and its surroundings show the landscape from various perspectives, but always from a distance, whereas in E.175 Amor confronts it dramatically, at close range, with the granite cliffs looming above the sea.