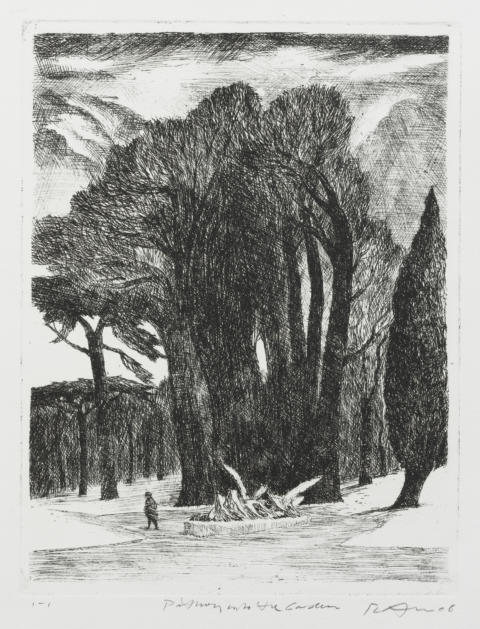 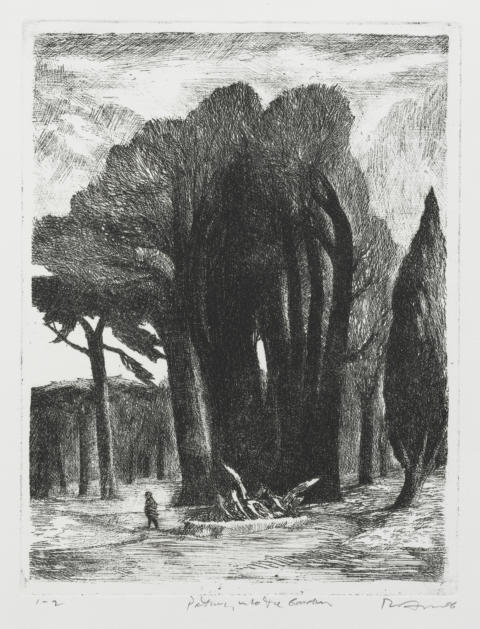 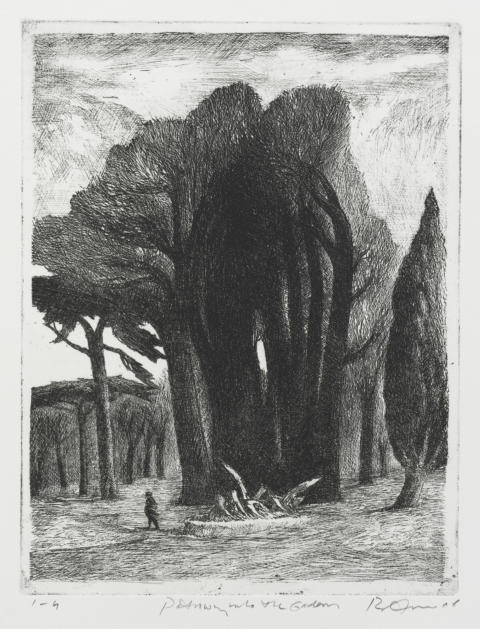 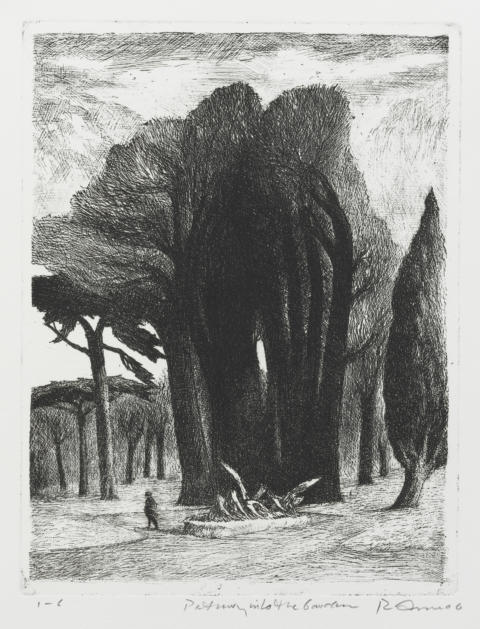 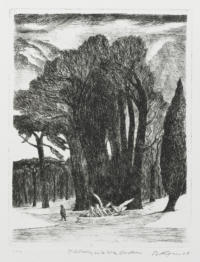 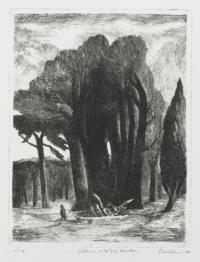 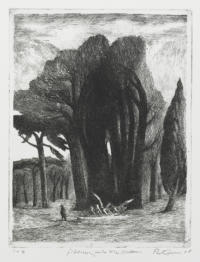 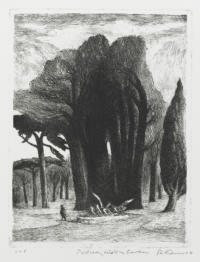 Etching. A view of public gardens with a central pathway surrounding a circular bed of aloe, behind which is a stand of tall trees with a cypress at the right. A small, lone figure walks along the path towards the left. The path is shaded with close horizontal strokes while the lawns have been left blank.

The stand of trees in the left distance has been burnished to lighten it; many of the tree trunks have been burnished on their right side, a clear indication of the source of light. The clouds have also been burnished in places, and new areas of hatching have been added to the sky at left. Specks of foul biting appear in the sky. The entire ground, including the areas of lawn, is now shaded with loose etched hatching.

Several individual trees in the left distance have been re-etched to differentiate them from the background. The top of the flat-topped pine at left has been darkened with etching and the etched area to its upper right has been extended fractionally upward. The right contour of the far left tree in the central cluster has been strengthened. The entire ground has been darkened with delicate hatching.

An area to the left of the figure has been burnished and the small vertical mark removed.

E.136 is one of a group of similar images, drawn and painted in 2006–07 and all depicting a view oriented in the same direction. The setting for this view, which first appeared in a sketchbook drawing done on site, is the Fitzroy Gardens, Melbourne. The small figure is Amor’s partner, the painter Meg Williams.

The etching started off with the title Pathway into the garden, and all state impressions, printed in 2006, are thus inscribed. However, a year after he had finished work on the copper plate, and when the edition for E.136 was being printed, Amor decided to alter the title to Entrance to the garden. Although the edition was printed in 2007, the artist dated all edition impressions to 2006, the year in which the image was conceived and the work on the matrix completed.

E.136 is one of the most tonally nuanced of Amor’s intaglio prints. Here the depiction of nature, the way in which the print was worked through its six states, and the wiping of the plate, all contribute to the evocation of a mood that is both tender and elegiac.

The inadvertent foul biting that appeared in the second state of the print caused speckling in the sky and in the etched lines, an accident that Amor put to good use: the speckling added a tonal element that was elaborated in subsequent states. At the same time, the artist gave attention to the clarifying of details, by, for example, defining individual trees and making clear the direction from which light illuminates the scene. After experimenting with inking and wiping the plate, Amor settled on a uniformly dark edition, selectively wiped and printed with much plate tone.