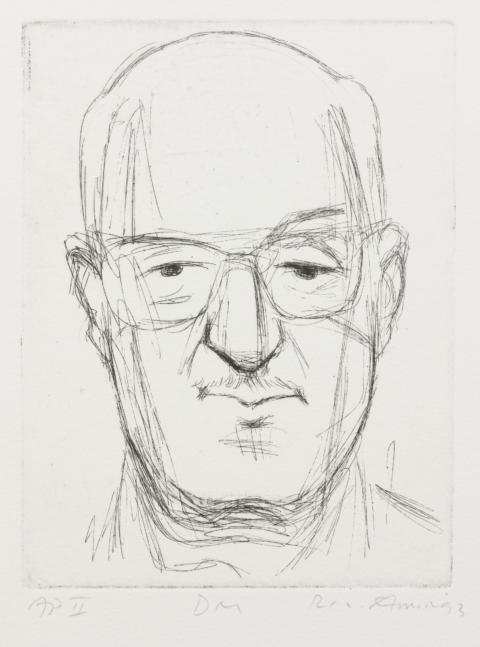 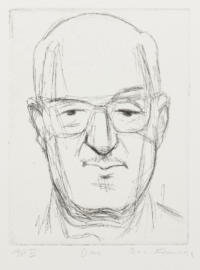 The right eyelid has been strengthened with drypoint. There are two surviving variant impressions of this state.

This is the third of five portrait prints of Australian writers that in 1992 Amor was commissioned to make for the literary journal Overland. David Malouf (b. 1934) is one of Australia’s foremost writers of fiction and nonfiction, and of poetry. He has been awarded many major Australian and international honours, including the International Dublin Literary Award (1996) and the Neustadt International Prize for Literature (2000). In 1993, the year in which Amor etched his portrait, Malouf was fifty-nine years old and his most recent novel was Remembering Babylon, a work that was shortlisted for the Booker Prize.

This portrait of Malouf is the first of two executed by Amor; it is based on a drawing made from television, although Amor no longer recalls the name of the program in which Malouf appeared, or when it went to air. The drawing has not survived; however, judging by the linear nature of the etching, it must have been a straightforward line drawing.

Although E.072 was taken through four states, the changes that Amor made in each state were minor ones, and only the final state is therefore illustrated here.

Amor’s other portrait of David Malouf is a painting, done from life in 2012. It was commissioned by the National Portrait Gallery, Canberra, following Malouf’s selection of Amor as the artist he wished to paint him.