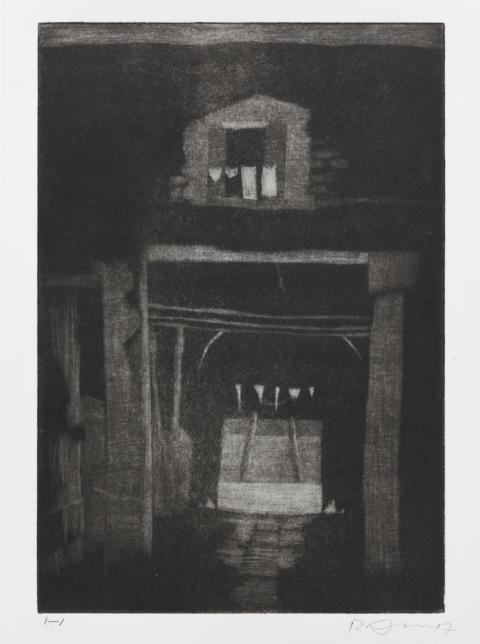 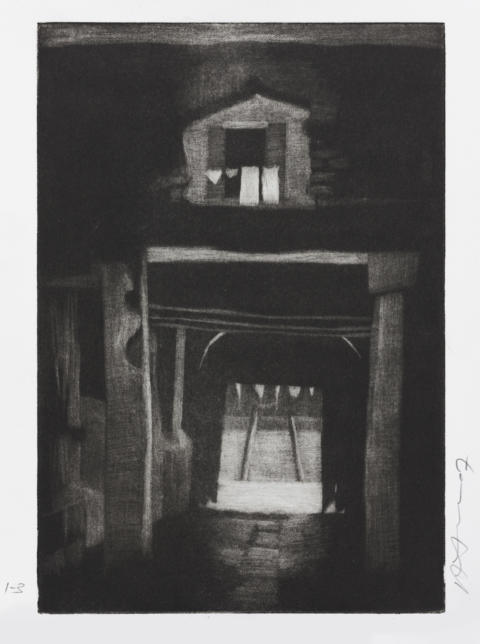 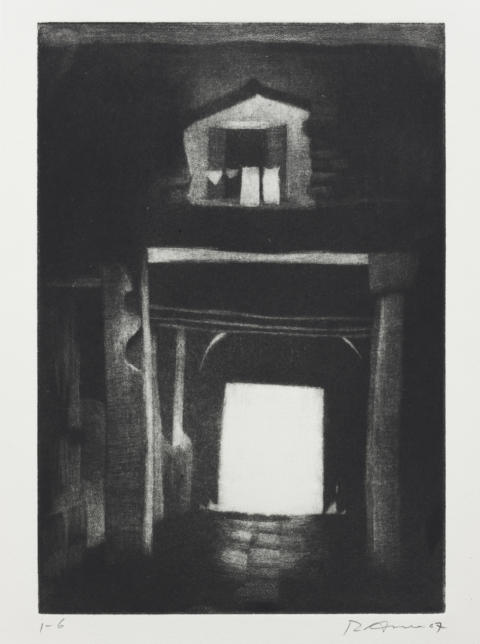 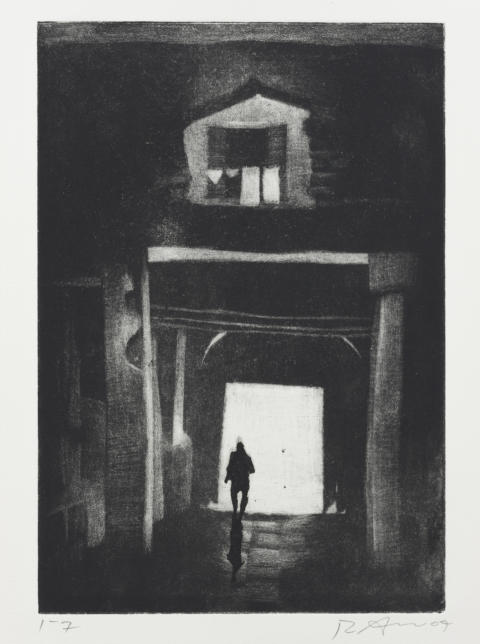 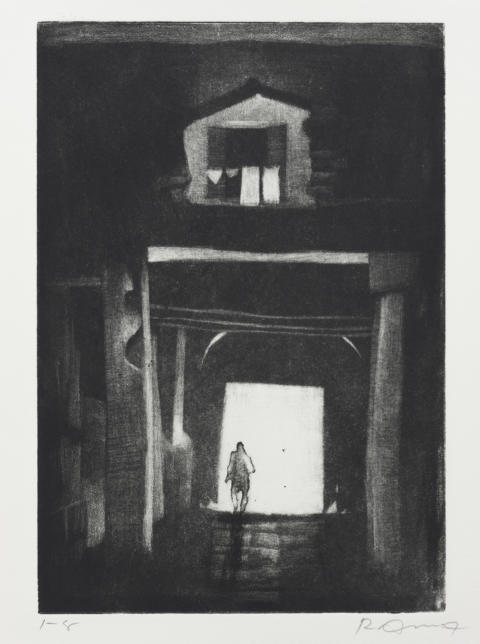 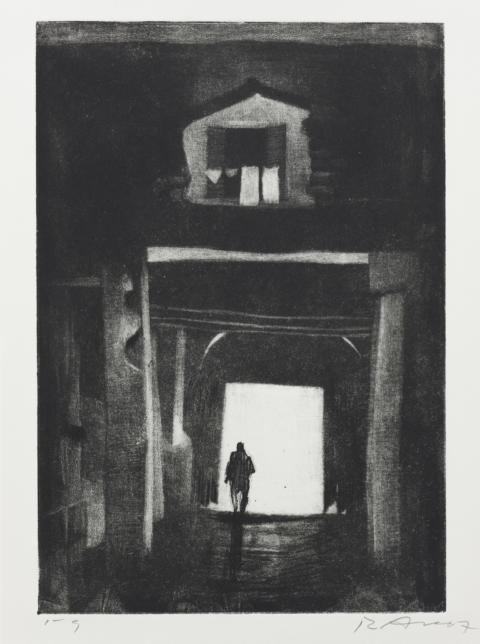 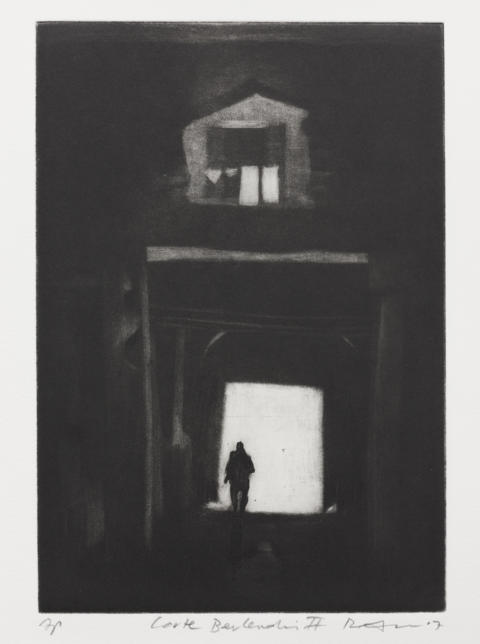 Artist’s proof (from edition, 2007; impression of 8th and final state, with plate tone) 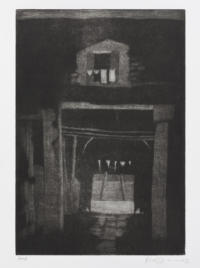 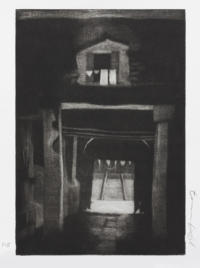 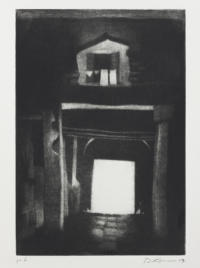 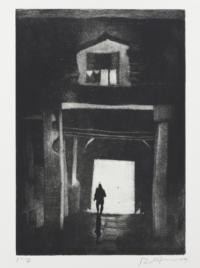 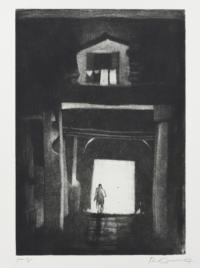 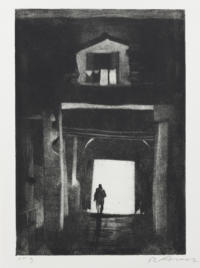 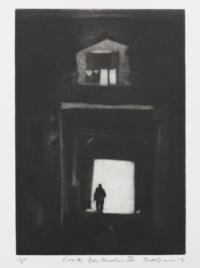 Burnished aquatint. A view of the alleyway known as Corte Berlendis. Above the passageway is a square opening with a peaked top, through which is seen washing hanging out to dry. In the distance, through the passageway, there are two mooring posts, and beyond them, in the distance, a row of silhouetted trees.

Further burnishing has been applied to many areas of the plate in order to achieve strong tonal contrasts and to clarify the architectural details.

The view into the distance beyond the passageway has been completely burnished away and is now an empty white rectangle. Other details of the composition have also been burnished, including the architectural details to the left of the opening, the thick horizontal strip above it, the column at right and the view beyond the square opening, which is now substantially lighter.

The walking man has been burnished, making him appear as though he is dissolving against the light; his shadow has also been burnished. Roulette work has been applied in a dark strip at the top of the pavement and, more sparsely, to the flagstones below it.

Drypoint strokes have been added to many areas of the lower two-thirds of the plate, including the walking figure, both sides of the passageway, the masonry at left, and the pavement. The pavement now appears distinctly concave. There are two variant impressions of this state.

This is the second of two prints whose subject is Corte Berlendis, a small alleyway or courtyard in the Cannaregio district of Venice. The other work is Corte Berlendis (cat. no. E.142), which depicts the subject from the opposite direction. E.148 is based on an undated pencil drawing in Amor’s large Venice Sketchbook, and was subsequently used as the modello for an oil, painted later in 2007. Amor was attracted to Corte Berlendis for the simple geometry of its decaying architecture.

E.148 went through considerable changes across its eight states. In the first four states, it incorporated a view, through the opening, over the waters of the lagoon, as Amor had recorded it in his pencil drawing. In the fifth state, the view of the lagoon was completely burnished away, and, in the following state, a figure was added. In the last two states, Amor focused largely on the optical effects created by the figure walking into the light. As with the earlier Corte Berlendis subject, he also experimented with plate tone while making this work, printing some impressions with so much ink that many of the architectural details are not visible. This is the case, for example, with the second impression of the final state (VIII.b).

Amor’s painting of the subject, made after the etching, amalgamated details from the early and late states. It includes both the landscape seen through the opening and the walking figure.