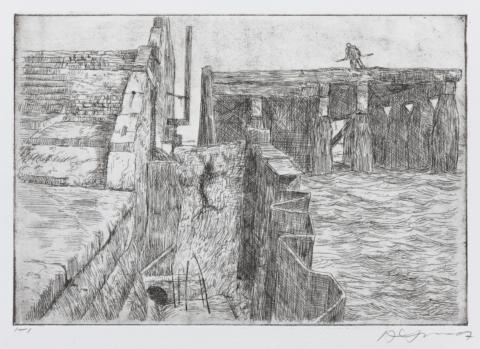 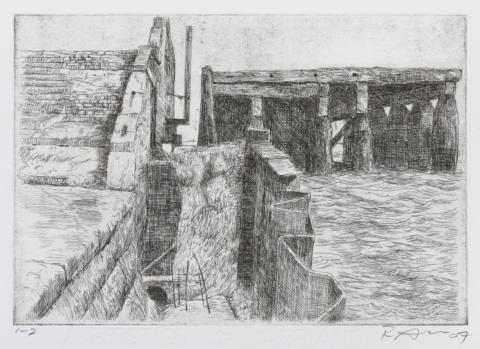 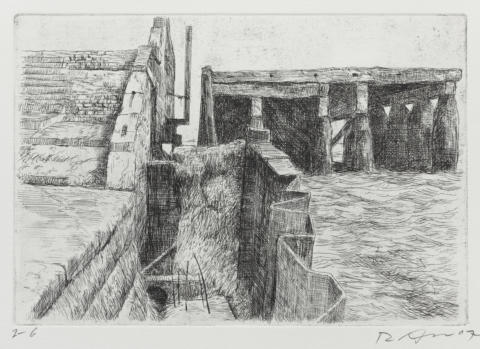 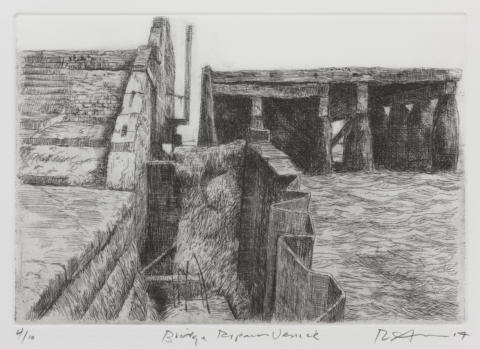 Etching. A view of the Venice lagoon with steps at left and an irregular retaining wall in the approximate centre. A large wooden structure in the water occupies the horizon at right; on top is the standing figure of a workman holding a horizontal beam. The subject is etched in all its essential details.

The figure of the man has been burnished out. Much of the plate has been etched with additional horizontal and oblique hatching in order to model the structures volumetrically.

Hatching has been added to many of the areas in shadow down the centre of the plate. The post at the end of the irregular retaining wall now has an emphatic left contour, and the first strong vertical of the retaining wall has also been strengthened. The upper edge of the facing irregular strip of rubble(?) is also defined with an etched contour. Several strokes of oblique hatching have been added to the water at the lower right. There are four surviving variant impressions of this state.

E.140 depicts part of the Fondamente Nove (or New Foundations), which is in the vicinity of the Venice Printmaking Studio. The etching is after a pencil drawing in Amor’s Venice Sketchbook, done on the spot on 12 June 2007, and is oriented in the same direction. In his work through the four states of this print, Amor was intent on achieving a strong sense of space and volume. From this perspective, the etching is different from the drawing, which is conceived largely in terms of outline.