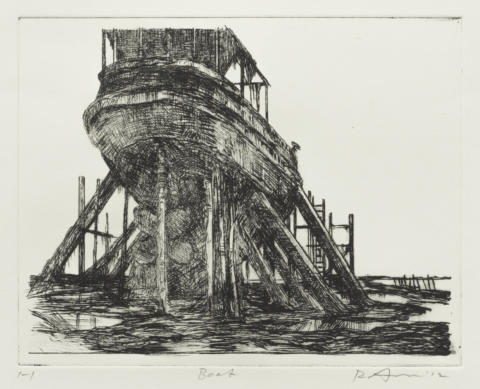 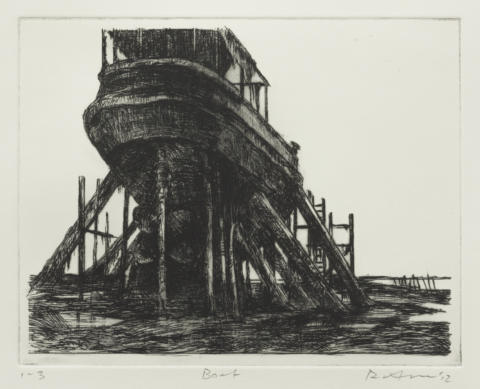 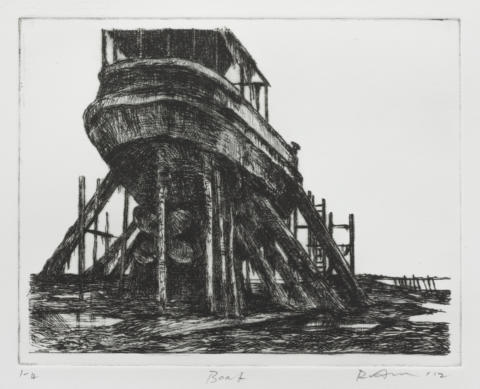 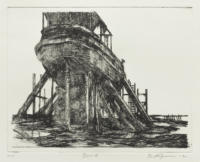 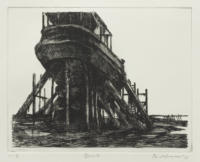 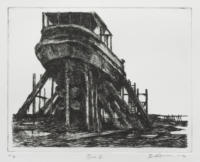 Drypoint. A propeller-driven boat in a dry dock, situated in tidal shallows, is viewed from below. The boat is propped up on wooden girders and is depicted from the stern; it has a railing at the top from which hang scraps of fabric, which give the vessel a derelict appearance.

A small triangular area has been burnished in the railing at the upper left, allowing the sky to be seen. Burnishing has also been applied to the freeboard at right (i.e. the band below the upper edge of the boat), to the shreds of fabric hanging on the railing, to the pool of water immediately below the boat at the lower right, and in the lower left corner. A row of short vertical strokes has been added to the protruding band of the stern and in the lower left corner.

A row of tiny peaks has been added to the horizon at the upper right, adjacent to the boat. A small bunch of drooping seaweed has been added beside the hull at the right. There are two variant impressions of this state.

This drypoint is after an oil painting made on site at the Port Melbourne docks, but is oriented in reverse direction. Otherwise, the print is close to the oil, and to a watercolour made after it, in all major details, including the truncated upper section of the vessel; in addition, the placement of the boat motif on the sheet reflects the positioning of the motif in the other two works.

The four states of the drypoint take the image from the relatively even grey mesh of lines of the first state to the dark, tonal modelling of the final state. The use of plate tone, at the lower left of the composition, in the edition impressions followed the tones of the painting, while also serving to clarify the pictorial space within the print. The addition of peaked hills on the distant horizon, which appear in the final state of E.169, was determined not by a wish to depict topographical reality, but by a decision to delicately accentuate that particular area of the composition.