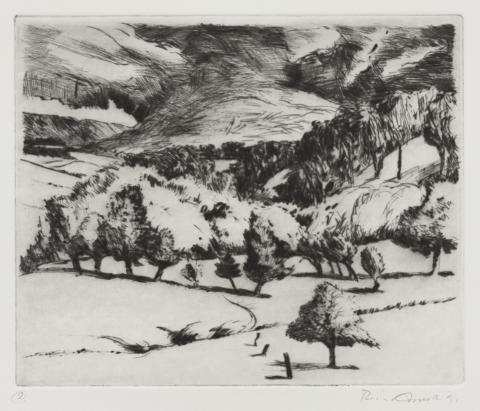 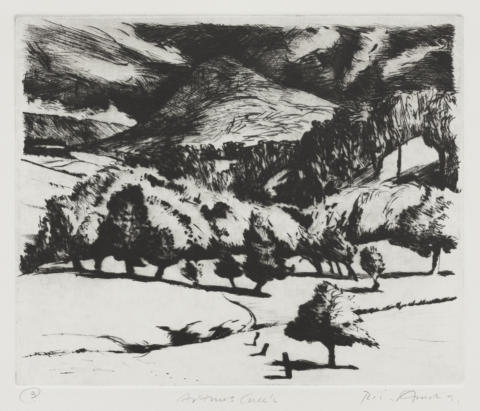 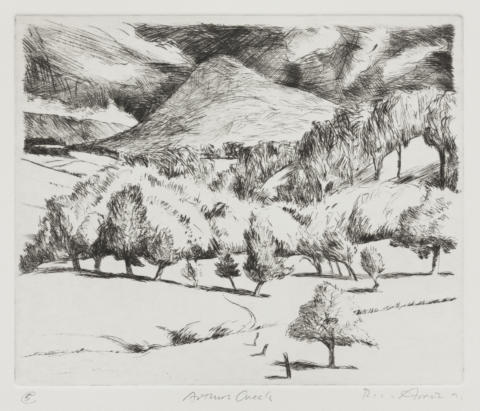 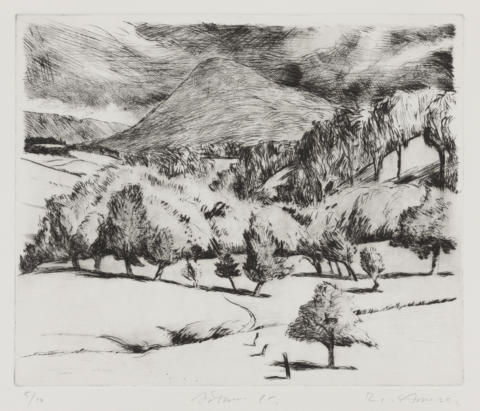 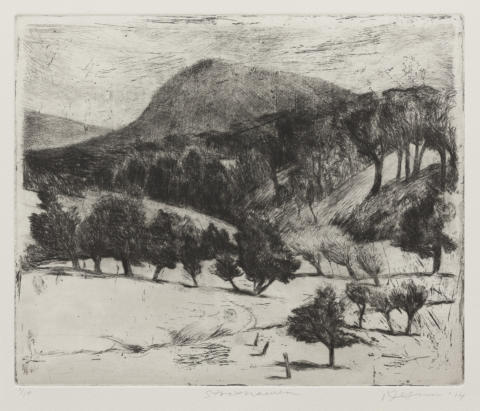 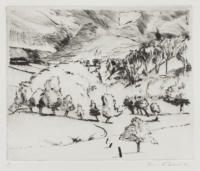 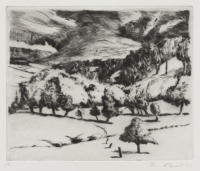 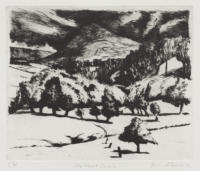 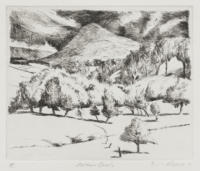 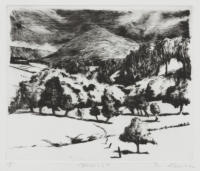 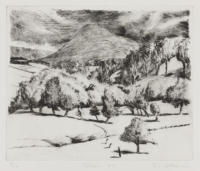 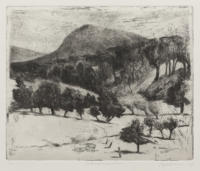 Drypoint. A view across rolling farmland with trees, towards a prominent mountain that occupies the upper centre of the plate. The sky is rendered with oblique angular strokes of drypoint, in patches that vary in direction.

More drypoint has been added to the trees, the sky and the mountain.

Drypoint lines and accents have been added to the sky. There are two variant impressions of this state.

The work has been retitled Strathewen. The plate has been selectively burnished, although scratches and foul biting that had inadvertently accumulated while the matrix was in storage, after the printing of the first edition, have been allowed to remain, in order to provide a sense of grittiness and texture. The general disposition of the vegetation has been retained but the outline of the mountain has been changed, trees have been added, and new drypoint has been applied extensively, across the composition. The small vertical lines on the left side of the mountain indicate bare trees.

Arthurs Creek is a township some thirty-five kilometres north-west of Melbourne. Like nearby Strathewen, it is in the vicinity of Kinglake National Park and Mount Sugarloaf, which is depicted in this print. Once a horticultural and grazing settlement, Arthurs Creek is now occupied mostly by small country properties, vineyards and orchards. The view shown in this drypoint is from Arthurs Creek Primary School, Arthurs Creek Road East, looking towards the north-east. The landscape is, however, reversed.

During the 1980s and early 1990s, Amor lived at nearby Cottles Bridge and he occasionally painted and drew the surrounding landscape. The earliest version of the view seen in the present drypoint is a small oil, Arthurs Creek, painted in the spring of 1988 (Art Gallery of Ballarat); however, the most important of the earlier depictions is the painting Summer at Strathewen, 1991, on which the drypoint is based (Fry 2008).

In February 2009, on the day now referred to as Black Saturday, the Arthurs Creek and Strathewen area was devastated by bushfires, in which many lives were lost and whole townships destroyed, among them Strathewen.

In 2012, Amor returned to the area to see how it looked in the aftermath of the fires, and he decided to rework his drypoint Arthurs Creek, made over twenty years earlier. Although the image that is captured in the 2014 version of the drypoint, now retitled Strathewen, dates from five years after the Black Saturday fires, their effects on the vegetation is clearly evoked in the scarring and scuffing of the copper plate, and the stick-like cover of trees burnt bare on the mountain.