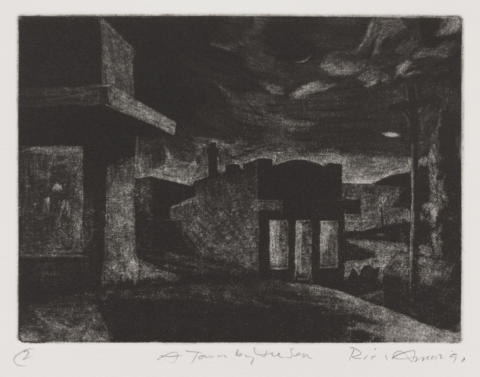 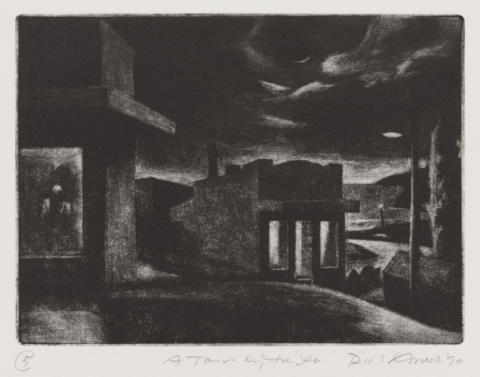 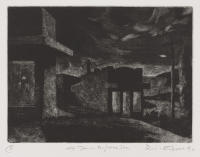 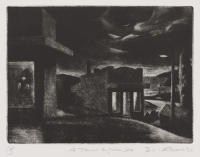 Further burnishing has been applied throughout, to clarify the subject. A crescent moon has been added in the sky, and vertical bands of light have been burnished into the windows and door of the central building.

The light areas of the sky and the road have been further burnished. There are two variant impressions of this state.

Catalogue Number
E.033
Title and Date
A town by the sea 1990
Description of Featured Image
A nocturnal view from a hill, showing two shops, one in the left foreground, the other downhill, at the centre of the composition. In the shop on the left is the figure of a standing man, who is dimly lit from above; he faces the viewer. Across the road, on the right, are a street light and a tall cypress. In the right distance is a meandering river, which leads into the sea. Although inscribed ‘5’, this is actually an impression of the fourth and final state of this print.
Where Made
Dunmoochin, Cottles Bridge
Medium Category and Technique
Intaglio Print: Mezzotint on copper
Support
Wove paper. Identified papers: Papers mentioned in notes on this work in Amor’s intaglio record books: white BFK Rives paper and cream Stonehenge paper.
Dimensions
Image size: 146 x 196 mm
Matrix size: 149 x 199 mm
Artist’s Record Number
RAE.29
Printer(s) and Workshop(s)
All impressions printed by Rick Amor. States I through IV, and edition, printed by Amor in his Dunmoochin studio, Cottles Bridge. Post-edition impressions printed in the Alphington studio.
Summary Edition Information
Four states. Edition of ten numbered impressions, 1991. Two post-edition impressions, 1994.
Exhibitions
Niagara Galleries 1991: Niagara Galleries, Richmond (Melbourne), Rick Amor, 10–27 April 1991, no. 18.
Niagara Galleries & NETS Victoria 1993–94: Niagara Galleries & NETS Victoria, Melbourne, Rick Amor & the Graphic Arts, Victorian and Tasmanian tour, 1993–94, no. 35.
Literature
Gary Catalano, Rick Amor & the Graphic Arts (exh. cat.), Niagara Galleries & NETS Victoria, Melbourne, 1993, p. 9, illus. p. 26.
For an illustration of the painting Town by the sea, 1989–90, see Gary Catalano, The Solitary Watcher: Rick Amor and His Art, Melbourne University Press, Carlton South, Victoria, 2001, pl. 17, opp. p. 110.
Collections
State Library of Victoria, Melbourne: five state impressions, numbered 1 through 5, all dated 1990; one impression inscribed ‘out of series’, dated 1991.
Art Gallery of South Australia, Adelaide: AP, dated 1990 (20155G134).
Comment

The town by the sea to which the title of this work refers is Amor’s birthplace, and his home until early adulthood – Frankston, a bayside town on the outskirts of Melbourne. Frankston’s sweeping curve of beach and the meandering Kananook Creek can be seen in the far right distance in this print. The arched eyebrows of the figure standing ghost-like in the shop window at left identify it as Rick Amor himself.

However, E.033 is not so much a record of the appearance of a specific place as it is a remembrance of feelings and experience. This is made explicit in the painting on which the mezzotint is based – A town by the sea (looking back), 1990 – whose colours are those of glowing twilight on the cusp of darkness. The mezzotint follows the painting closely, but reverses its orientation. There is an earlier painted variant of the subject, with the title Town by the sea, 1989–90 (Catalano 2001), the composition of which was later used for a lithograph, printed in 1992.

Amor has said that he had difficulty printing this, his third mezzotint, as the plate broke down quickly. Nevertheless, the entire edition (as well as two post-edition impressions some three years later) was printed before the plate was cancelled, with a cut to its upper left corner.