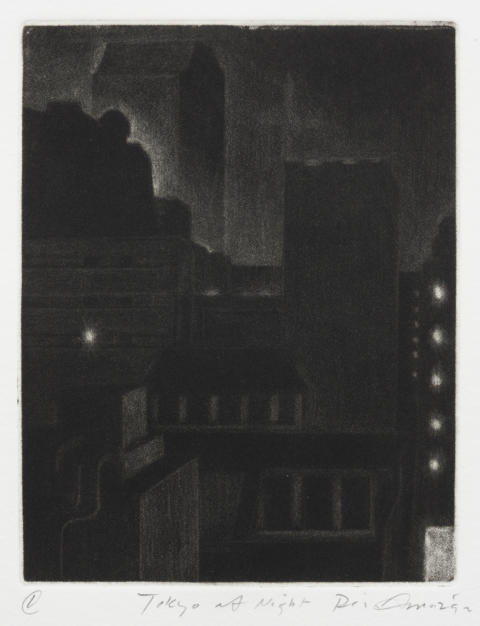 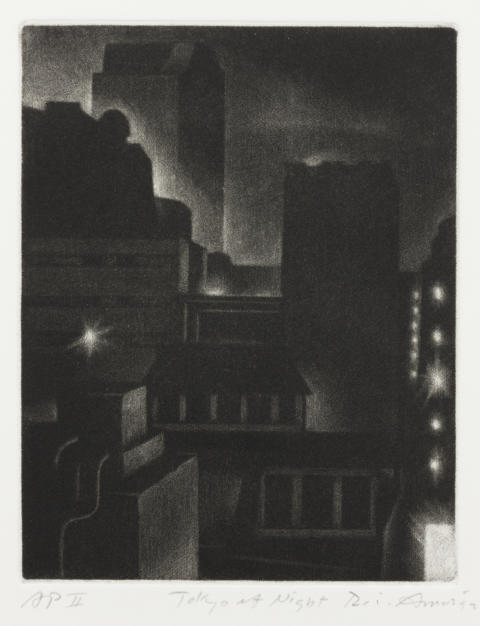 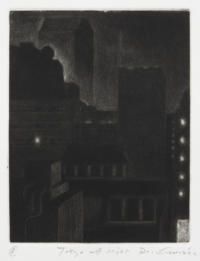 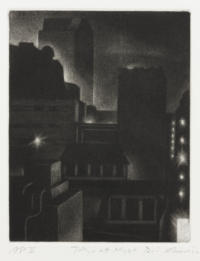 Mezzotint. An outlook, from a high viewpoint, onto a dense city at night. The predominantly tall buildings are illuminated by the faint glow of reflected light, by visible lights, and by other, unseen lights. The composition has been roughed out with the burnisher, and the irregular burnishing marks are still apparent.

Increased burnishing to the building at the lower centre has given it greater definition, and the upper right quadrant of the image is now lighter in tone, again as a result of burnishing. There are two variant impressions of this state.

In September 1989, Amor and his partner, the artist Meg Williams, travelled to the UK via Tokyo, where they spent a few days. This mezzotint is based closely on a pencil drawing, dated 3 September 1989 and inscribed ‘view from Hotel’, that Amor made of the view from the window of the hotel where he and Williams were staying. (Amor does not remember the name of the hotel.)

The drawing is not linear but tonally worked in pencil, and, although Amor did not conceive it as a preparatory work, it is a sufficiently accurate tonal record to have allowed for its later translation into mezzotint. When, in 1996, Amor came to make a view of New York comparable to that seen in E.063, he drew the view in linear outline and accompanied the drawing, Windowless building, NYC (Perry 2013), with colour notes, but this preparatory work did not result in a mezzotint.

While E.063 is not as elongated as the 1989 drawing, it is, in other ways, a faithful record of the scene depicted there. The five states of the mezzotint record a clear progression towards an accurate and moody evocation of a city at night, and demonstrate Amor’s progressive mastery of the mezzotint technique, which he had first worked with two years earlier when he made North Devon, 1990 (cat. no. E.024).